Theatre Review: Streaming Broadway production of ‘Death of a Salesman’ 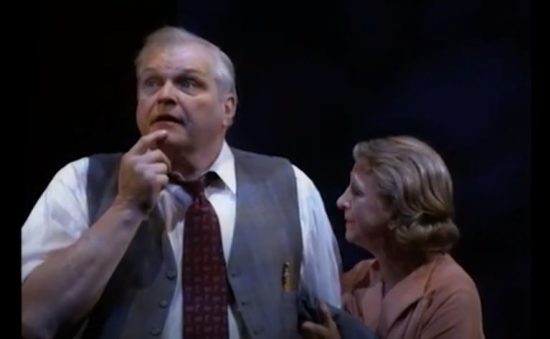 Brian Dennehy as Willy and Elizabeth Franz as Linda in the 1999 Broadway revival of “Death of a Salesman.” Photo courtesy of Goodman Theatre.

Attention must be paid once again to Arthur Miller’s Death of a Salesman.

Lucky for us, Playbill.com and The Actor’s Fund have made it possible to relive a monumental revival of this American classic. Available for a short time online, the 1999 Broadway transfer of Chicago’s Goodman Theatre production roars back from the past with the dynamic presence of the late Brian Dennehy showing audiences why he took home a Tony Award for his performance of the beleaguered traveling salesman, Willy Loman.

The pedigree for this production does not stop with Dennehy, however. Costar Elizabeth Franz, taking on the role of strong yet fragile Linda Loman, was also awarded a Tony, along with director Robert Falls and the production for Best Revival of a play.

…it was a balm to escape into Arthur Miller’s deeply tragic story for several hours.

If you need background on Arthur Miller’s 1949 play, you probably didn’t attend an American school during the last 70 years. Death of a Salesman is usually required reading for English classes. At the same time, the play is revisited from coast-to-coast by theaters large and small, and has been brought back to Broadway a number of times — each time with a formidable leading man the role of Willy Loman, the salesman losing is touch and his mind in the twilight of his years.

As the fractured salesman who wants desperately to hold on to his fragile American dream of success in business and a thriving family, Dennehy gives a masterful, nuanced performance as Willy. His first entrance is a case in point. This hulk of a man opens the door, holding his two sample cases that seem as weighty as twin globes. Moving slowly forward with slumped shoulders, arms pulled down miles and miles by his cases, we grasp a sense of Loman’s world-weary state from the beginning. Dennehy rides the waves of Willy’s despair, confusion, and euphoric memories with stinging truth. The look on Dennehy’s face as the new boss Howard tells him “I don’t want you to represent us” in Boston or anywhere else was heartbreaking. I swear he physically shrinks as Willy’s plight goes from bad to worse before he tragically takes charge of his own life and death.

As his long-suffering and devoted wife Linda, Elizabeth Franz matches Dennehy in scene-for-scene. When Linda listens to Willy’s last attempt at dreaming for the future, it is easy to believe her loving stare. As Linda’s own desperation builds, while her husband descends into a mental and emotional black hole, Franz summons depths of feeling that I have rarely seen in actresses playing the role.

As their two sons — characters with problems of their own, sadly — Ron Eldard and Ted Koch are a study in contrasts. Each actor is perfectly cast as the Loman boys, struggling with their father’s plight, and wrestling with their own at the same time. Eldard, as elder son Biff, is the picture of the all-American jock. That picture, however, is mostly a façade, since Biff has not held up the promise of his glory days as a high school football star. Now a drifter, Biff is a tarnished golden boy. Eldard turns in a powerful performance throughout, especially in his scenes with Franz and Dennehy.

Koch, as younger son, Happy, plays the lady-killing lothario to the hilt. Koch’s portrayal is a chip off of Willy’s block — good with the gift of gab and a dreamer who believes his own bull. Koch’s scenes with Eldard crackle with humor, when needed, and with palpable tension.

As a family unit, these four actors work together like a finely tuned ensemble, allowing the dramatic arc to build through the confusion, conflict, and ultimate revelations of long-held secrets. Falls, the director, clearly understands the layers of drama, comedy (yes, there are humorous moments), and tragedy and allows the play to unravel, and the dialogue to land and settle for full effect.

The supporting cast is exceptionally strong as well, especially Howard Witt as Loman’s decent neighbor, Charley, and Allen Hamilton as the memory of Willy’s older, and much more successful, brother, Ben. Richard Thompson handles the young nerdy version of Bernard memorably and creates a strong impression as the grown up Bernard. His scene with Willy — when we learn Bernard is not only a successful lawyer but a family man — speaks volumes about how Willy’s dreams for his boys, especially Biff, weigh heavily on his soul.

Almost another character in the production was the scenic design by Mark Wendland — at least the scenery’s constant movement and rearrangement echoed the disjointed nature of Willy’s state of mind. Michael Philippi lighting design complemented the ebbing and flowing scenery with an evocative flair.

There is something special about these recorded productions that have been made available for a limited time during the pandemic. In fact, they are godsends of culture and entertainment. A much needed oasis from the rattle of political noise and talk of the Coronavirus, it was a balm to escape into Arthur Miller’s deeply tragic story for several hours. Catharsis for a new era.

Advisory: Adult situations are depicted along with some mild adult language.

Death of a Salesman by Arthur Miller is a streaming presentation of the Goodman Theatre of Chicago and Broadway revival production. It is available for free on through Playbill through October 25. Click here for access.