Concert Review: ‘Lawrence Brownlee and His Friends’ on the Opera Philadelphia Channel 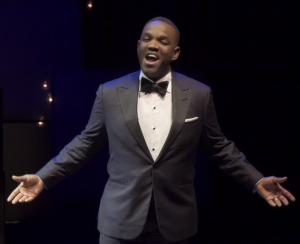 In an evening of a variety of performances, opera tenor Lawrence Brownlee surprises with an energetic rendition of the popular American standard “It Had to Be You.”

Theatre-goers surely miss attending musicals, plays, and operas in person during the pandemic. While theaters remain closed, the Philadelphia Opera has launched its 2020-2021 season via streaming on its Opera Philadelphia Channel. Tenor and host Lawrence Brownlee and his friends fill this void in having put together a show with a mixture of  pieces — not just from opera, but from various genres such as Gershwin, Lieder in English and German, spirituals, and, of course, some opera.

The Opera Philadelphia Channel is off to an excellent start …[with] an enjoyable, musical evening of versatile song selections…

Soprano Lindsey Reynolds sings Victor Herbert’s “Art is Calling for Me” from his operetta The Enchantress. It emphasizing word-painting, that is, stressing the meaning of the words through vocalization, and is brought forward as she sings the words “To sing on the stage, that’s the one life for me…,” giving an extra melodic emphasis to the word “sing.” As for “That’s what I’m sighing for art is calling for me,” this phrase from the same aria surely expresses the singers’ longing to take the stage and shine forth during the global Coronavirus emergency which has cut off performers’ ability to sing on stage significantly. This is a void the Philadelphia Opera’s new channel hopes to fill and enable artists to do just that.

Soprano Sarah Shaffer meets the challenges of a demanding piece —Mozart’s “Laudamus te” Great Mass in C minor — with its scales and leaps. Pianist Myra Huang accompanies her ably in a piece usually performed with many instruments. Soprano Lindsey Reynolds possesses a charming voice while singing Jules Massenet’s “Je suis encore tout étourdie” from the opéra comique Manon. Although this piece is sung in French, Lindsey Reynolds’ stage presence and word-painting make the feeling of the piece accessible and straightforward even for those who do not know the language. Fortunately the subscriber can turn on English subtitles for the foreign-language pieces. Continuing in a French mood, Philadelphia native, Karen Slack, sings “Il est doux, il est bon” from Massenet’s Herodiade.

Lawrence Brownlee continues in a Romantic-era manner as he sings “Allegro io son” from Donizetti’s opera Rita and keeps this operatic aria beautifully lighthearted. He addresses lyrically Clara Schumann’s “Liebst du um Schönheit,” Op. 12, No. 4, from poet Friedrich Rückert’s text. Loving not only beauty, as the title suggests, the poem and this version also speak fondly, although unseasonably, of enjoining us to “love the spring.”

German Lieder are again given attention as soprano Slack sings “Die stille Stadt” (“The Silent City”) from Fünf Lieder by Alma Mahler, a musical setting to a poem by Richard Dehmal. In this poem, a traveler notes the town’s emptiness, silence, and stillness, with rooftops and houses obscured by smoke. The melancholy atmosphere brought forth effectively by the singer brings to mind other German poems on this theme, such as Theodor Storm’s poem “Die Stadt” (The City), in which a city is described as lacking many natural sounds. Like the Storm poem, “The Silent City” ends with a recall to youth. Here pianist Myra Huang comes in for well-deserved praise as she segues from complicated dissonance in the Alma Mahler setting to soft, simple, and melodic close accompanying the poet’s text of the “song on the child’s lip,” and perhaps of the nature of silence itself in “quiet cities.”

Not only German literature is given gorgeous vocal treatment in these Lieder among friends, but French and English literature as well. Lindsey Reynolds sings “La mer est plus belle,” a musical setting by Nadia Balanger to a text by Paul Verlaine. Robert Browning’s “The Year’s at the Spring” (from “Three Browning Songs, Op. 44) by the American composer by Amy Beach is performance by Sarah Shaffer. The Beach performance is a reminder that many of the composers in this program are women, which is a unique break from traditional recitals.

Mr. Brownlee, as well as the other performers, often express fondness for spirituals in their conversations included in the program. They give voice to this genre, perhaps appropriate for our trying times. These selections include “Watch and Pray,” sung by Lindsey Reynolds and Karen Slack and arranged by Undine Smith Moore and Myra Huang. “My Good Lord Done Been Here,” is performed by Lawrence Brownlee and arranged by Jacqueline Hairston. H.T. Burleigh’s “Deep River,” is presented by Sarah Shaffer. Tenor and sopranos prove themselves equally adept and engaging in the spiritual form as in their opera selections and Lieder.

Pianist and music director, Myra Huang, says in conversation that this program is also intended to be lighthearted by the smooth inclusion of standards and show-tunes. George Gershwin’s “Fascinating Rhythm,” from the Broadway musical Lady Be Good, is rhythmically and melodically sung by Sarah Shaffer. Lawrence Brownlee’s performance is nothing short of dazzling in Isham Jones’ “It Had to Be You.” Mr. Brownlee, taking on the role of Frank Butler in Irving Berlin’s Annie Get Your Gun, has all of his friends in the program take turns as his partner and ends the evening with verve in this musical’s showstopper, “Anything You Can Do I Can Do Better,” usually performed as a duet.

With this performance, The Opera Philadelphia Channel is off to an excellent start of its 2020/2021 season. Join “Lawrence Brownlee and His Friends” for an enjoyable, musical evening of versatile song selections that include opera, Lieder, musicals, and American popular standards.