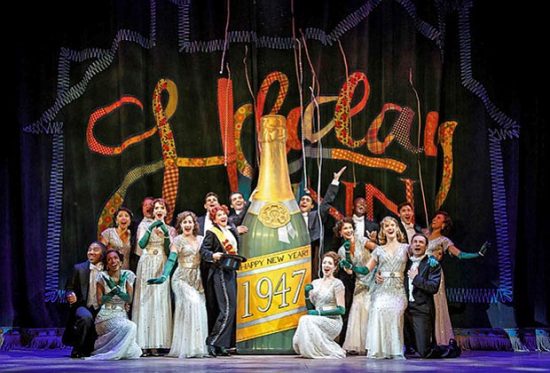 In anticipation of the holidays, PBS recently aired Roundabout Theatre Company’s  production of “Irving Berlin’s Holiday Inn” on its long-running Great Performances series. It is directed engagingly by Gordon Greenberg and choreographed beautifully by Denis Jones.

‘Irving Berlin’s Holiday Inn’ is recommended as an enjoyable and, at times, thrilling trip through pleasant holiday memories…

The source of the play is the 1940’s Hollywood movie musical. The plot focuses on singer/songwriter Jim Hardy (Bryce Pinkham) foregoing show business to pursue the idealistic dream of the simple life at his recently-purchased Mason Farm in rural Connecticut. With the help of original owner, Linda Mason (Lora Lee Gayer), and “handyman,” Louise (Megan Lawrence), Jim creates Holiday Inn, a restaurant/entertainment venue only open on public holidays, with topical shows centered around each holiday. Chorus girls don turkey costumes for Thanksgiving and lovely Easter bonnets for the “Easter Parade” sequence. Love develops between Linda and Jim, though this budding romance is endangered when Jim’s former show-business partner, Ted Hanover (Corbin Bleu), arrives and threatens to step in not only as dance partner, but as a rival love interest for Linda.

While the classic film introduced Christmas standards such as “Happy Holidays” and “White Christmas,” the Broadway show adds additional Irving Berlin songs which were originally not in the film, including “Blue Skies,” “It’s a Lovely Day Today,” and “Cheek to Cheek.”  In the case of “Blue Skies,” this is one of the best routines, telescoping time as Jim moves from show business to adjusting to life on the farm. This brings us to a broader point. The iconic performances of Bing Crosby and Fred Astaire cannot be replicated, and for this and other reasons, the Broadway version works less well in scenes such as the firecracker sequence which are loyal to the movie  — this despite the fact that Corbin Bleu does gives a riveting tap performance in that scene and has a brilliant comic flair when overacting as a Hollywood studio attempts to film “Holiday Inn.”

Still, the Broadway show works best when it takes off on its own and departs from the movies, as in the chorus skipping rope while tap dancing in unison to “Blue Skies.” Going with this point, the comic character of Louise added for the Broadway show is a major asset, especially in this production with Megan Lawrence (an actress with Maryland roots) both dancing superbly and comically sporting a Cupid costume on Valentine’s Day.  For fans of the original film, the heart of the play is nonetheless loyal to the film version. In fact, many sets reflect memorable images in the movie, such as the large Valentine’s Day heart poster behind Ted and Linda, and the nostalgic scene when Jim introduces his new song “White Christmas” to Linda.

This production approaches its material with great humor. There are some fun and popular cultural references such as when Jim and Louise sport the “Green Acres” / “American Gothic” pose and a lampshade reminiscent of that in the film “A Christmas Story” is seen on a dancer’s head as she visits the inn. Another strong feature is that the sets and action, at times, extend to off-stage areas. Mr. Bleu takes to the aisles beside the audience in his firecracker dance scene and part of the orchestra is in a white-basket (Easter basket?) balcony. The orchestra segues smoothly between Broadway, big band, and Latin sounds, including in the overture and entr’acte.

While not all scenes can work as well on the TV screen as in the theatre, some do, as when Jim conducts the orchestra to throw Ted and Linda off of their dancing out of what he perceives as their developing amorous relationship. The camera uses the opportunity to switch between “conductor Ted” and the true conductor of the orchestra.

Quick lighting and scene changes give a frenetic energy to the show, and 1940s retro costumes look fabulous, from the glamorous Hollywood and nightclub fashions to the rural look of characters on the Mason Farm. The director and camera operator collaborate well with cross cuts between the Latin-styled “Heat Wave” of the night club world and Jim settling uneasily into farm life.

Where there are streaming possibilities, “Irving Berlin’s Holiday Inn” is recommended as an enjoyable and, at times, thrilling trip through pleasant holiday memories, especially as we approach the holidays with limited travel and live entertainment activities due to the on-going pandemic.

Check your local PBS station for airing and streaming options.