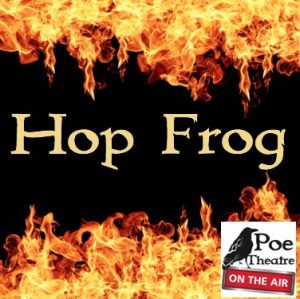 The Baltimore-based National Edgar Allan Poe Theatre on the Air returns this month of December with Caroline Bennett’s superb adaptation of Poe’s story “Hop-Frog.” As usual in this series, the story is framed as a tale told by a patient of a mental institution run by one Dr. Maillard, who also serves as the series host. The audience is brought along as a visitor. In this episode, Dr. Maillard takes us to visit Trippetta, described by Maillard as “an impossibly tiny creature with the fully formed, perfectly proportioned body of a woman.”  Trippetta narrates her troubled past in which she and her fellow dwarf, Hop Frog, had been abducted from their native land and forced to serve as entertainers of a cruel king and his seven government ministers — she as a ballerina, and Hop Frog as jester. After the king hurts Trippetta, Hop Frog devises a plan of revenge, hinted at in the story’s original subtitle: “The Eight Chained Ourang-Outangs.”

The sharp writing is perfectly complemented by outstanding voice acting …

The sharp writing is perfectly complemented by outstanding voice acting. Creator and producer Alex Zavistovich plays Dr. Maillard who, as the series is progressing, is becoming increasingly sinister. His Dr. Maillard performs in his usual compelling, lightly off-kilter style. Hop Frog and Trippetta are brought to life by the husband-and-wife acting duo of Mikey and Jen Bevarelli, both of whom play the parts sympathetically but also with a streak of vengefulness. Jen Beverelli, voicing Trippetta, presents her character with charm but also steely resolve. The nameless king is also well-portrayed: “I never knew anyone so keenly alive to a joke as the king was,” writes Poe in the opening lines to the original tale in the voice of an ambiguous first-person narrator. Actor Brian MacDonald brings out the King’s jocular, but recklessly cruel, nature with a jovial voice filled with condescension.

Sound effects are used to marvelous advantage. When the king asks Hop Frog’s advice for a court event, for instance, a bell rings as if Hop Frog has just thought of an idea in contrast to the audience’s suspicion that he has been plotting his revenge under the guise of the unusual charade he proposes all along. Flourishes of synthesized trumpets establish the listener’s experience of being in a royal court, while dins of shock and alarm provide a sense of reality for the closing events of the story.

The writing of this radio dramatization (described at the opening of the performance as “a tale of love, death, and vengeance in the royal court”) is highly original. Several aspects of the original “Hop-Frog” story are reimagined in Caroline Bennett’s script to make them more effective in an audio format. The character of Trippetta is elevated to a central role. In Poe’s original story, she is the catalyst for Hop Frog’s revenge, but a secondary character. This choice may actually enrich the emotional complexity and ironic nature of the story. While Hop Frog and Trippetta remain justified in their desire for justice and for escape, the question is also raised as to how Hop Frog’s purpose in life may shift from his love of Trippetta to the love of revenge. Trippetta wishes to see Hop Frog as kind and sympathetic, but the listener is also asked to consider if this in fact hides her own underlying rage and obsession with vengeance. A further irony is that while Trippetta escapes from her role as the king’s entertainer, she remains an inmate in the institution and a source of entertainment for the condescending Dr. Maillard, who also seems more interested in her show than in her substance.

“Hop Frog” is one of Poe’s less famous tales. This highly engaging production helps correct this historic oversight for those who have not encountered the story before, which may be much more attuned to modern tastes than to those of 1849 — when the story first appeared and the year of Poe’s death. Those who are already familiar with “Hop Frog” will likely be delighted with the manner in which this production both honors and reimagines the tale. We highly recommend this entry in the series, especially as Mr. Zavistovich has indicated he may soon move away from Dr. Maillard’s asylum to explore some of Poe’s detective stories, such as “The Murders in the Rue Morgue.”

“Hop Frog” and other installments produced in the series so far may be streamed at NPR here.