Audio Review: ‘The Mystery of the Drawn Daggers,’ a Loveday Brooke Mystery by We Happy Few 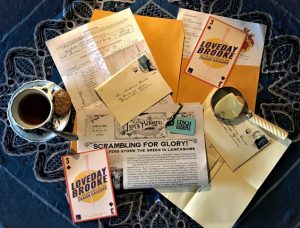 “The Mystery of the Drawn Daggers” comes with a mailing of clues and objects which seem to have popped right out of the audio play and delivered to your doorstep.  Magnifying glass not included.

We Happy Few is a small but dynamic theatrical company housed in the Washington, DC Capitol Hill neighborhood. Currently, they are producing dramatized audio versions of classic mysteries, but with a twist. Their excellent audio productions may be purchased with an optional package of artifacts which add a physical dimension to the audio play. During our past Halloween season, We Happy Few featured an Edgar Allan Poe collection under the title, “A Midnight Dreary,” which was available with a fabulous collection of faux items from some of the stories at the time of Halloween. The current production features the Victorian lady detective, Loveday Brooke, a creation of writer Catherine Louisa Pirkis. While the author may not be well-known today, during the 1890s her books were best-sellers, and Loveday Brooke was seen as a rival to Sherlock Holmes. She was also the first female author to create a popular lady detective. This story is wonderfully adapted for We Happy Few by Kerry McGee, with Miss Brooke coming into her own as a radio detective and with just a touch of the noir along with the Victorian.

…reviving a classic, yet fresh, Victorian detective character in our own age of audio drama.

In this adventure, Miss Brooke is called upon to investigate seemingly threatening cards with drawn daggers which arrive at the address of the Rev. Anthony Hawke. Rev. Hawke, his wife Henriette, and their Corgi, Biscuit, have been housing Alice Monroe, the adult daughter of the reverend’s old friend. They live there in part to help Miss Monroe’s father prevent her from marrying a man named William Wentworth Danvers of whom he disapproves as too poor to be “a suitor of any substance.”  Loveday is called upon to investigate and a smashingly clever denouement solves the mystery. Indeed, the story equals the high bar set by Sir Arthur Conan Doyle’s Sherlock Holmes, and perhaps Edgar Allan Poe in his C. Auguste Dupin stories such as “The Purloined Letter.” “Sometimes the explanation that is obvious is the one to be rejected, not accepted,” our Miss Brooke states, employing the same Victorian strain of deductive reasoning familiar to fans of Holmes. This renders the story both accessible, while also novel in terms of content and the detective’s gender.

Debora Crabbe is nothing short of outstanding as Loveday Brooke, channeling, in accent and dynamic personality, the Victorian British past.  The same is true of Robert Pike as Mr. Dyer, Loveday’s admiring, but sometimes hapless, employer as head of the Lynch Court Detective Company for which she works. Other cast members turn in exceedingly fine performances as well. Sound effects are simple but effective, as Loveday is heard typing her own cases on a period typewriter (Miss Brooke apparently has no Dr. Watson as chronicler). The dramaturgy by Keith Hock is excellent.

As with “A Midnight Dreary,” an aspect that makes this production particularly memorable is that it comes with a mailing of materials (direct from the Lynch Court Detective Company) to transform the radio drama into a tactile, as well as audio, experience. You can hold the mysterious letters with the daggers drawn on paper. In a small envelope is a key attached to a card with Loveday’s workplace name, “Lynch Court —Detective Co.” Also included is an entertaining newspaper, “The London Lady’s Pictorial,” from June 17, 1893. It covers a lady’s golf tournament in Lancashire, “Dr. Kellogg’s Health Cure” (“the secret is in the cereal”), and a newspaper article about a “scandal in Bohemia” which detective Sherlock Holmes is investigating — no doubt an allusion to the Conan Doyle story of the same name. Kerry McGee (whose imprint “McGee Press” is seen on the newssheet) must be given enormous credit for these clever period touches and the objects she has collated and produced.

While not absolutely necessary, these at-home theatre props are quite helpful in transporting the listener to the Victorian world of the story. This reviewer hopes that We Happy Few will produce more mysteries of Loveday Brooke, reviving a classic, yet fresh, Victorian detective character in our own age of audio drama. We recommend this production enthusiastically as we look forward to Sherlock Holmes’ “The Adventures of Dancing Men,” now scheduled to be released on January 15, 2021. For more information about these productions, please click here.