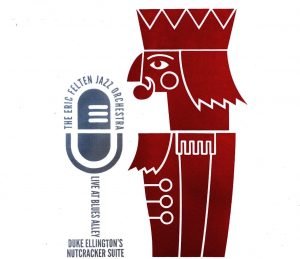 “I beg you to call to mind the table covered with your last Christmas gifts…” Thus we read in E.T.A. Hoffmann’s Christmas fantasy “The Nutcracker and the King of Mice.” Since this story first appeared in 1816, Hoffmann’s Nutcracker tale has appeared in many forms, most famously in Tchaikovsky’s ballet. Masterful jazz artist Duke Ellington in turn created an impressive jazz interpretation of Tchaikovsky’s classic musical work, one which is up-tempo and brassy.

Musician and conductor, Eric Felten, has frequently performed a very popular holiday show of Ellington’s vivacious “Nutcracker Suite”at the premier jazz club, Blues Alley, in Washington’s Georgetown neighborhood. While this year’s live big band performance has been cancelled due to COVID, the irrepressible Mr. Felten has released a compact disc of his 2019 Blues Alley performance, allowing the Felten Jazz Orchestra once again to entertain us during the 2020 holiday season.

Hoffmann, the author of the original Nutcracker, also wrote in his tale: “At this moment soft music was heard, the doors of the palace opened … ” We are not sure the words “soft music” apply when referring to how the Eric Felten Jazz Orchestra performs Tchaikovsky’s Christmas classic brilliantly in the Ellington style with jazz riffs, loud brass, flashy saxophone work, and riveting drum solos. After an exhilarating “Nutcracker Overture,” Mr. Felten follows Ellington in lending Tchaikovsky’s titles witty updates: “Arabesque Cookie” for the “Arabian Dance” and “Peanut Brittle Brigade” for the “Nutcracker Brigade.” The ambience of Blues Alley, famous for cocktails, is more than a little suggested as “Dance of the Sugar Plum Fairy” ferments into “Sugar, Rum, Cherry.”

While Felten produces an authentic performance of  Ellington’s “Nutcracker Suite,” it places the work in an even greater Christmas context. The performance, recorded live before an enthusiastic audience, also includes Mr. Felten and his orchestra performing swing versions of secular 1940s holiday tunes such as “Let It Snow! Let It Snow! Let It Snow!” and “I’ll Be Home for Christmas” (interestingly, not the familiar melody by that title). Mr. Felten also performs tributes to other jazz bands, including  Billy May’s sizzling, mambo-flavored “Rudolf the Red-Nosed Reindeer” and “O Christmas Tree,” the latter patterned after the style of Count Basie. “Have Yourself a Merry Little Christmas” is expressive yet playful, sampling Nat King Cole’s “Mona Lisa” on trombone. Maestro Felten is heard playing trombone solos and, in the non-Ellington pieces, often provides smooth vocals.

This CD is a wonder, capturing the sound and spirit of one of Mr. Felten’s exquisite holiday performances. The one aspect that has been reduced slightly is the conductor’s lead-in commentary to the songs. Mr. Felten is something of a jazz educator, and during live performances, he often explains the history of the songs he performs, though sometimes the stories are done in a whimsical, apocryphal vein. We recall last year, an impish Mr. Felten mentioned that Ellington had suggested a jazz version of the “Nutcracker Suite” to Tchaikovsky to which the nineteenth-century Russian composer then allegedly replied, “Cool!” On a more serious note, prior to playing “O Christmas Tree” in the Count Basie manner, Mr. Felten informed the audience that “Count Basie was the polar opposite of Duke Ellington in the swing era,” going on to explain the differences between Basie and Ellington sounds. Such banter is heard on only a couple of tracks of the CD, leading us to wish for more liner notes with Mr. Felten’s knowledgeable comments on individual selections.

We thus heartily recommend this handsome CD. Containing just over an hour of both hot and smoother jazz numbers, it will give years of pleasure to jazz fans and holiday CD buffs, and as such it is a marvelous stocking stuffer!  We also look forward to future live performances of the Eric Felten Jazz Orchestra in the post-pandemic near future.

“Duke Ellington’s Nutcracker Suite, Live at Blues Alley” can be purchased at Mr. Felten’s website here. It can also be streamed through Amazon Music.