The Next Ice Age: ‘Skating & the Arts’ 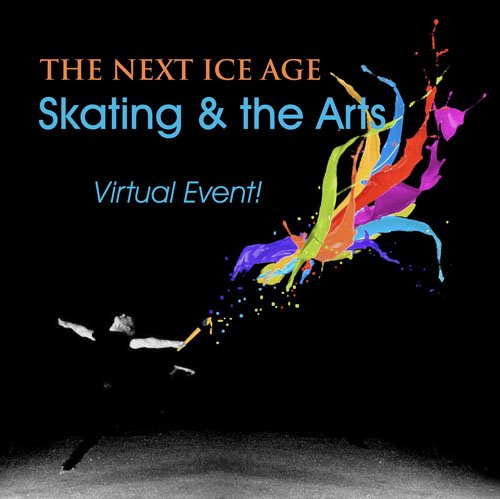 For nearly five decades, December has been devoted to “ The Nutcracker” newspaper reviews and finalizing the end-of-the-year “Best 10” lists for theater and dance performances. I won’t miss writing about “Nuts,” as it’s familiarly called, but I do cherish promoting favorite performances, especially local talent.

…a celebration of Nathan Birch and Tim Murphy and what they bring to The Next Ice Age.

Nathan Birch, Tim Murphy, and their fabulous Next Ice Age (NIA) has made the list dating back to 1988 when the skating company was formed and performed at the Columbia Ice Rink. Highlights include Olympic star John Curry gliding — really dancing a la Gene Kelly — in his signature “On The Beautiful Blue Danube.”
Four years earlier in 1984, this writer had the privilege of reviewing The John Curry Skating Company (with Dorothy Hamill, Birch, and Murphy) on the stage of the Kennedy Center where ice was formed on top of the floor to allow smooth and beautiful skating. A decade later, when The Next Ice Age made its Kennedy Center debut, the stage was coated with ice to allow Dorothy Hamill to spin endlessly in a gorgeous ballet created by Murphy for the Olympic star and friend of NIA.
After a brief career in films and Broadway theater, Curry died at 44 of heart complications from AIDS. Thankfully Birch and Murphy carried on their mentor’s artistic medium and created new works based on Curry’s breezy, ensemble pieces. Then they added their own style of ice dancing — Murphy, with some jazzy moves and comic touches, while Birch emphasizes a contemporary twist to classical ballet.
Just as this generation of ballet choreographers who encourage freedom of movement in their works, Birch encourages his skaters to “feel the music,” then take off in all directions. This is especially true in his 2019 ice ballet, “Dreamworld,” and in his latest creation set to the “4th Movement of Tchaikovsky’s 6th Symphony” — a wonder to behold.
To celebrate its 32nd anniversary, The Next Ice Age presents “Skating & the Arts,” a virtual presentation of ice dancing memorabilia. My favorite moments focused on Dorothy Hamill, on and off the camera. It brought a flood of memories of her ice dancing solo, all pink and pretty, at the Kennedy Center. And she’s just charming when she recalls stories of The Next Ice Age.
The two-hour, online program, streams through December 6, 2020, 11:59 p.m. at thenexticeage.org, presents vintage skating, kids on ice, awards, and lovely tributes. Mainly, it’s a celebration of Nathan Birch and Tim Murphy and what they bring to The Next Ice Age. Let’s hope a live performance will make the 2021 list.