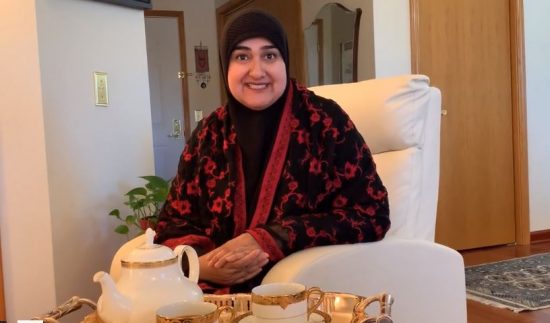 Sit down to tea and listen to masterful storytellers spin tales of personal pain and triumph, each with a different flavor and experience. Yet each character is portrayed by the same, gifted actress, Rohina Malik. “Unveiled” is the one-woman show adapted for online consumption and is now streaming, courtesy of Baltimore’s Theatre Project.

Mixed with humor and pathos, Rohina Malik’s writing and acting are in perfect harmony with this one-woman show which she has performed across the United States. For a Zoom-style performance in an intimate space, such as an apartment, it must be adjusted for the lack of interplay with a live audience. Malik’s sparkling eyes and open persona easily connect with the camera. Her scaled down performance still offers a wonderful glimpse into the different characters she has created, honed, and sharpened after years of stage presentations. Within the five scenes of “Unveiled,” Malik’s portrayals welcome the audience into different worlds that are touching and illuminating.

Mixed with humor and pathos, Rohina Malik’s writing and performance are in perfect harmony…

We first hear from Maryam in “Chocolate Chai.” Maryam is a fashion designer from Pakistan who makes Bollywood style dresses for American clients. She shares her thoughts on chai, chocolate, and how she does business. Considering herself an artist who chooses her subjects rather than them choosing her, Maryam recounts as to why she has refused to design wedding dresses since an incident of racism she faced at a friend’s wedding. Malik conveys the pain and frustration that far too many individuals who follow the Islamic faith and the tenets of modesty face on a daily basis.

As Noor in “Moroccan Mint Tea,” the flavor of the scene changes to a different type of client meeting. Noor is an attorney going over facts of a case with her defendant, while sharing her culture and a story. “In my culture, tea is more than just a drink. It’s a symbol of friendship, tradition, and hospitality.” Noor goes on to recount how she met a Muslim convert named Joe who embraced Islam due to an orange. Speaking as her father, Noor says “What kind of idiot converts over a fruit?” As her story unfolds, we see that Joe was no idiot. Hatred and racism is something that can tear lives apart and inspire individuals to fight for those who need defending. When a dark world needs light, it is important to find the strength to allow truth to enter in. “Morrocan Mint Tea” contains a powerful message that is handled with care by the gifted writer and performer.

For the third story, Malik is Inez. The scene is entitled “Kawah Sada,” named for the Middle Eastern version of coffee. It is a bitter variant, served traditionally at Arabian weddings according to Inez in her distinctive, Southern drawl. It seems she is sitting with a female friend, setting the record straight about September 11, a painful episode for both Muslims and non-Muslims alike. Inez is a strong, Southern woman, raised by her grandmother who did her best to prepare her for the world that tries to take advantage of women, treats those with brown skin as second class citizens, and demonizes those who follow Islam. Inez tells her friend of the huge sacrifice she chose to make on that fateful day to protect her unborn child.

During the fourth installment, “Kashmiri Chai,” Shabana, from the west of London, sits on a porch with a glass of chai and a pile of sliced lemons, talking to a magazine interviewer. Shabana sits, spinning a torrent of words, images, and feelings. “Kashmiri Chai, pink like the sky,” in a slam-poetry style monologue, reveals a soulful woman who has a lot to reveal about herself and her experience. Shabana has embraced hip-hop as a way to express herself as a feminist and a Muslim. She explains why the lemons symbolize a terrible time in her life as her mother was obsessed with lighter skin.

In the fifth scene, Layla welcomes the viewer to the Middle East Delights restaurant, offering a spot of sage tea, “in the name of God,” to the waiting customers. It is the time of Ramadan, the holiest time of the year for the Islamic faith — a month of daily fasting and contemplation. Layla recounts a different experience on September 11, no less powerful than that of Inez, of how a woman of faith dealt with the aftermath of that horrible day and her own personal loss. Having to face yet another moment of hatred and vitriol, Layla states that Islam means peace and murder is forbidden in the Qur’an. She learned the power of mercy on September 11, even while her own heart was breaking, as she urged another person to unveil their heart of fear and ignorance.

Malik’s vivid portrayals of each character paint unique portraits of different women who happens to share the same faith, and often face the same ignorance and derision due to their heritage. Each story contains a lesson for our time, powerfully shared with simplicity and grace. Malik is aided by the subtle editing and camera work of director Sabeena Schmidt who allows each character the space and opportunity to shine through.

Theater is meant to transform the audience after the performance is finished. Even watching “Unveiled” on my laptop, I felt the power of a masterful storyteller and the transformative nature of Rohina Malik’s writing, a performance you owe it to yourself to view before it ends its online run on January 1.

Advisory: Some mature subject matter. Recommend for age 12 through adult.

“Unveiled,”a one-woman play written and performed by Rohina Malik, offered online by Baltimore’s Theatre Project, HAS BEEN EXTENDED THROUGH JANUARY 31, 2021. Access is $20 and a ticket can be obtained by going to the Theatre Project website here.