Theatre Review: ‘Kinky Boots’ on The Shows Must Go On online 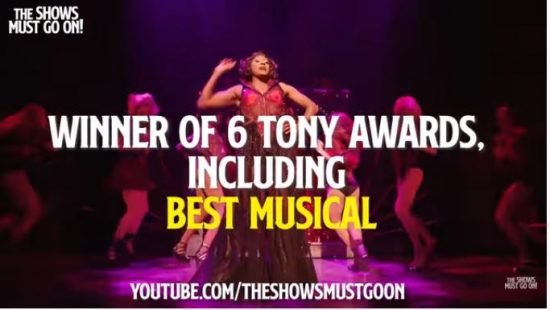 The West End production of ‘Kinky Boots’ was recently featured on The Shows Must Go On! and streams on BroadwayHD.

“Kinky Boots” is a big, beautiful, Broadway hit with heart and soul that celebrates tolerance, acceptance, and love.

“Celebrate yourself triumphantly!” These lyrics, taken from the finale of six-time Tony winner,”Kinky Boots,” quickly encapsulates the joyous and fierce message of this musical based on the film by the same name. For whatever reason, I missed the film version when it was released in 2005. But when the musical came along, I was hooked by the story, the performances, and the catchy score by 1980s pop legend, Cyndi Lauper.

Audiences around the world who did not see the show on Broadway, in London, or on tour are in luck thanks to two options for viewing this musical that celebrates the fabulous in all of us. “Kinky Boots” was a recent selection for “The Shows Must Go On!,” the Britain-based YouTube channel, that brings audiences “show tunes, backstage access and full performances from some of the best loved musicals in history.” To subscribe to the channel, go to this link. The current offering, “The Railway Children, is available until Wednesday, December 23, 2020.

“Kinky Boots” is a big, beautiful, Broadway hit with heart and soul that celebrates tolerance, acceptance, and love.

The other way you can catch “Kinky Boots” and a wonderful selection of other Broadway and London productions is through the BroadwayHD, available on many streaming platforms for a free trial, then $8.99 per month. If you have a device with iOS, or AppleTV, Android, Roku, Amazon Firestick, or Amazon Prime, it is just a few clicks away. I urge you to give it a trial run and check out “Kinky Boots” or one of the many other shows such as “She Loves Me” or “Irving Berlin’s Holiday Inn.” It’s well worth the additional subscription.

Now back to “Kinky Boots,” which is engaging from start to the phenomenal finale. When I first heard about this show’s development a number of years ago, I had to investigate the original film, starring Chiwetel Ejiofor, Joel Edgerton, and Nick Frost, and immediately saw the possibilities for a musical. Wow! I had no idea just how ripe for the musical stage it was. With director/choreographer, Jerry Mitchell, Harvey Fierstein penning the book, and Cyndi Lauper writing a Broadway score and lyrics for the first time, they took the ball and ran with it to international acclaim.

With a flexible unit set based on the idea of the Price and Sons shoe factory — a brilliant design by David Rockwell with lighting by Kenneth Posner —the story unfolds cinematically but with the panache of a musical where the industrial world clashes with the milieu of drag queens and outrageous performers. The basics of the story are as follows: Charlie Price has reluctantly inherited his family’s struggling Northampton shoe factory, facing financial ruin and job losses by most of the workers. Charlie’s story is paralleled by Lola (real name Simon), a London-based drag performer who seeks proper footwear that will look great and yet withstand his manly frame. Lola enters Charlie’s life at the right time for both of them to take a journey together of discovery, tolerance, and financial success. The unlikely pair find they share something in common — growing up with demanding fathers. Their individual father-son relationship is poignantly covered in the song “Not My Father’s Son,” one of the lyrical gems among Lauper’s Tony Award-winning score.

The London production of the show opened in 2015, and was recorded with the original leads, Matt Henry as Lola/Simon (repeating his Olivier Award-winning role), and Killian Donnelly as Charlie. Henry captures the fierce drag queen persona of Lola and the wounded Simon with style and alacrity. Every musical number in which Lola is featured pops off of the stage and screen, starting with “Land of Lola,” which introduces the audience to the glittery world of high heels and high camp. The first act finale, in which everyone at Price and Sons joins Lola in “Everybody Say Yeah” is a knockout, too. Like the original Lola/Simon (Billy Porter), Henry truly soars during the solo spot that serves as an 11 o’clock number for the character — “Hold Me in Your Heart”— and the likely reason both performers were showered with praise and awards.

As the reluctant shoe factory owner, Donnelly offers a great contrast to Henry’s out-there drag performer. Truly a straight-man, Donnelly brings charm to what could be a role overshadowed by the drag queen with whom he shares the stage. As Charlie, Donnelly has a light and supple singing voice, ideally suited to the pop-infused songs by Lauper, featured in a series of soliloquies and in “Step One.” Donnelly, who bears a strong resemblance to the original film Charlie, Joel Edgerton, also has a palpable onstage chemistry with Natalie McQueen as Lauren, a factory worker who has a crush on her boss. McQueen shines in her solo spot, “History of Wrong Guys.”

Director and choreographer Mitchell’s cinema-inspired staging smoothly transitions from intimate scenes to big production numbers, such as the act one finale and “In This Corner,” where Lola proves that inside every drag queen is a manly man just waiting for the right time to enter. Lauper, Mitchell, and the entire cast work their proverbial magic in the big-hearted, boot-wearing finale, “Raise You Up/Just Be,” which for my money is one of the best closing numbers of a Broadway or West End musical in the last decade. “Change the world when you change your mind” and the other five steps in the Price and Simon secret to success are words to live by for any human being seeking to be a tolerant and accepting person. And lord knows, the entire world could use more of these qualities today. e.

For a taste of Broadway from the comfort in your own home, you cannot go wrong with this production. Check it out on BroadwayHD or look up the next selection on The Shows Must Go On!, The Railway Children, for a brief sojourn from the pandemic.

Advisory: Not rated but be aware of the subject matter — violence, sexuality, foul language, and drug use are all depicted.

“Kinky Boots” was available December 18-20 on The Shows Must Go On, or on BroadwayHD anytime (with free trial and paid subscription).