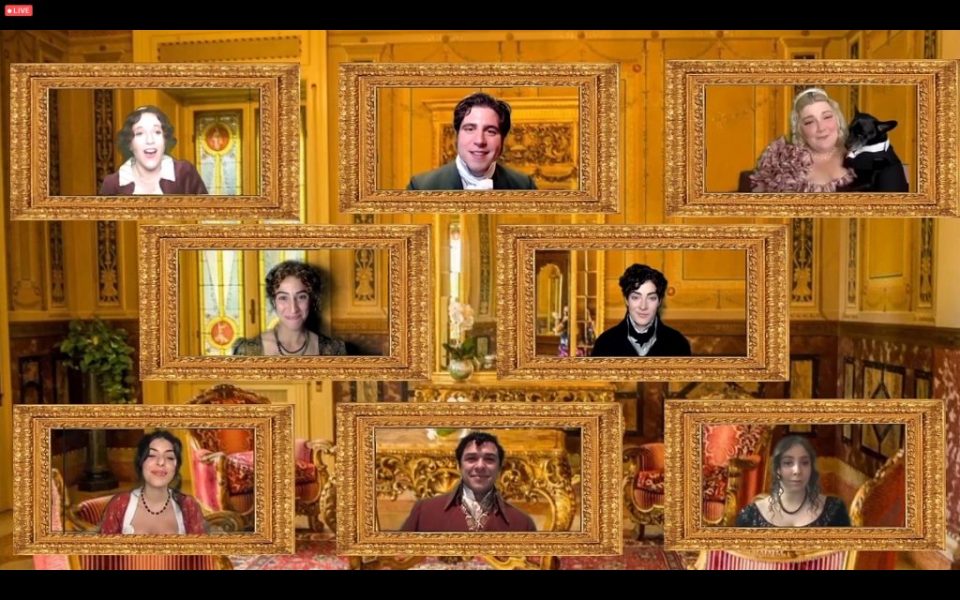 The cast of “Miss Bennet: Christmas at Pemberley”

A little over 200 years separate the publications of Jane Austen’s beloved novel, “Pride and Prejudice,” and its theatrical successor, “Miss Bennet: Christmas at Pemberley” by Lauren Gunderson and Margot Melcon. Penned in 2017, the sequel is no equal to the original story — that’s not its mission. Instead, it is a warm and funny visit with Austen’s characters finding themselves again facing troubles of inheritance, marriage, and love.

Baltimore’s Strand Theater brings us this holiday treat, a streamed performance directed by associate artistic director, Erin Riley. We’re reacquainted with the various Bennet sisters and their extended circle two years along from the action of “Pride and Prejudice.” Mrs. Elizabeth Bennet Darcy and her sister, Mrs. Jane Bingley, are quite happy now, with their sister, Mrs. Lydia Wickham, less so. But it’s the maiden, middle sister, Mary, who draws our focus here.

The production is achingly joyful — real comfort food for the spirit, which may be the highest aspiration of a Christmas play.

Contrary to late 19th century reportage from James Edward Austen-Leigh’s “A Memoir of Jane Austen,” our Miss Bennet has not settled for a dull marriage to one of her uncle’s clerks. Further, she has grown in poise, wit, and charm while maintaining her dedication to books and the pianoforte. She is dissatisfied with her solitary lot in life and seems resigned to eventual spinsterhood. Enter Arthur de Bourgh. Newly-landed with the death of Lady Catherine de Bourgh, His Lordship is a last-minute Christmas guest at Pemberley. He and Mary strike a furtive, fragile romance based largely on intellectual attraction. Their “happily ever after” is endangered by meddlesome interference from Lydia with a tried-and-true plot device —  the “love note switcheroo” — and a shocking revelation with the sudden appearance of Mr. Darcy’s jilted Anne de Bourgh who storms in with a “won’t be fooled again” bearing. There are hijinx and shenanigans aplenty along the way, a predictably satisfying ending, and a delightful cameo by Baltimore’s favorite canine actor, Fado Lyons.

Playing host at the family gathering, the Darcys are nimbly portrayed by Emily H. Gilson and Alex Kafarakis. Julie Gozalo-Michaud and Justin Johnson are the jovial Bingleys, with the former expecting a blessed event any day now. Betse Lyons lights up the screen as youngest sister, Lydia, all mischievous energy and good intentions. As spanner-in-the-works, Anne de Bourgh, Emma Hooks is wonderfully blustery and shows a great sense of comic timing.

Our central characters, Mary and Arthur, are played by Volcano Jones and Anna O’Malley Steuerman who deliver a riveting performance. (We last saw Steuerman in 2019’s “Icarus at the Border” at Towson University). Arthur is preternaturally naive and nervous in Steuerman’s hands, with a degree of sincerity that constantly threatens to overwhelm. As Mary Bennet, Jones brings agility among the classics, having previously performed with Baltimore Shakespeare Factory and Chesapeake Shakespeare Company. Miss Bennet is a terrific study in personal evolution, and Jones delivers the goods with a great combination of spark and subtlety.

Director Riley, and assistant director, Dana Woodson, deserve loud, virtual applause for building a structure in which the play constantly and consistently drives forward, while also giving this fine cast ample opportunities to do really fantastic work. Their ability to perform at such a high level is all the more extraordinary given the actors’ isolation from each other. The visual structure is somewhat “Brady Bunch” in the usual Zoom sense, but the cast makes it very easy for viewers to forget that.

For streaming purposes, technical director, Theresa Olson, and videographer, Thea Persaud, provided the cast with green-screens, allowing the use of regency-period wallpaper appropriate to the settings. Costumes by Sarah Meadow Walsh complete the lush world of Pemberley, while intercut, woodcut illustrations by Mika J. Nakano and music by Donna Korn are masterfully arranged to bind scenes together.

An opening night viewing revealed a few minor technical nits to pick. There are uneven audio levels and quality among the individual performers’ equipment, and a lack of fill lighting resulting in heavy green-screen shadows. One can also find fault with the playwrights’ accuracy of mimicking early 1800s English phrasing and grammar, even with the Bennet sisters speaking with mismatching British accents. But it’s crucial to point out that the performances and presentation of this play by Strand Theater far outweigh any minor quibbles. The production is achingly joyful — real comfort food for the spirit, which may be the highest aspiration of a Christmas play.

Advisory: The event is suitable for audience members of all ages.