Theatre Review: ‘The Railway Children’ on The Shows Must Go On! online 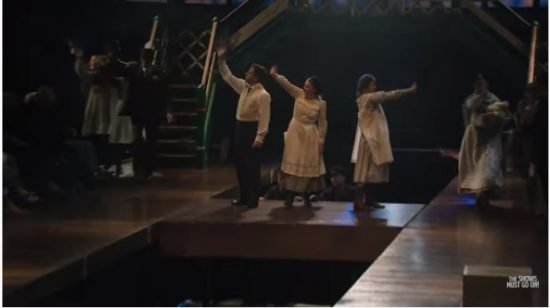 “The Railway Children,” featuring Izaak Cainer, Rozzi Nicholson-Lailey and Beth Lilly, on The Shows Must Go On and BroadwayHD online.

Evoking the bygone era of British high society and the heyday of travel by steam train, “The Railway Children,” is a family-friendly event with a decidedly English flair and a truly unique staging that should satisfy audiences of all ages.

As an American, I had to do a little digging about The Railway Children, a beloved children’s book in Great Britain. Published in 1906, author Edith Nesbit combined intrigue and adventure into a story about three privileged youngsters who work to solve the mystery of their missing father while befriending a bevy of colorful characters at the local railway station near their new home in Yorkshire. Apparently the book and the many film and television adaptations of “The Railway Children” are commonly revered all over the United Kingdom. The stage adaptation originated in 2008 at the York Theatre Royal, and has been re-staged several times, quite memorably at the National Railway Museum in York, featuring a vintage steam locomotive! The production from 2016 was recorded in performance and is the current selection on The Shows Must Go On!

“The Railway Children” to me, is a new classic that I could see engaging audiences for years to come.

I must say, the imaginative staging helped weave an intriguing story that captivated and was filled with surprises galore. I love discovering new plays even if, for now, I am homebound like everyone else, while theaters are closed. “The Railway Children,” to me, is a new classic that I could see engaging audiences for years to come.

With the audience arranged on two sides of the museum’s train platform, the staging incorporates the working train and moveable platforms that allow for fluid and creative flow from scene to scene. The cast, lead by the talented trio of Izaak Cainer, Beth Lilly, and Rozzi Nicholson-Lailey as the Waterbury siblings, mingles character and storytelling techniques to bring the story to life. As young adults looking back on their adventurous childhood, Cainer, Lilly, and Lailey easily inhabit their younger personae. A sizable ensemble of actors step in and out of the myriad of other characters such as servants, train passengers, and family members who figure into the story which contains moments of mystery as well as those that tug the heart.

Other members of the cast connect to the audience as well, particularly Martin Barrass as Albert Perks, the station master, Andrina Carroll as the mother, Robert Angell as their father, and Michael Lambourne as the Old Gentleman.

The play, adapted by Mike Kenney, and originally directed by Damian Cruden, is truly a wonder to see onscreen. Utilizing the moving platforms on a real rail line, with strategic appearances by an authentic steam train, the staging kept me on the edge of my seat the entire time, making me wish I could have been in York for the actual play performance. The experience must have been utterly thrilling for the audience when the steam engine blasts its way down the platform. Though the filmed version captures just a bit of, it is still a memorable moment.

The very British experience of “The Railway Children” can now be shared in any corner of the globe with internet access. For a warm, family experience of theatrical magic, I urge you to point your browser to The Shows Must Go On! or BroadwayHD for this delightful production.

“The Railway Children” is available December 21-23, 2020 on The Shows Must Go On! or on BroadwayHD anytime (with free trial and paid subscription).