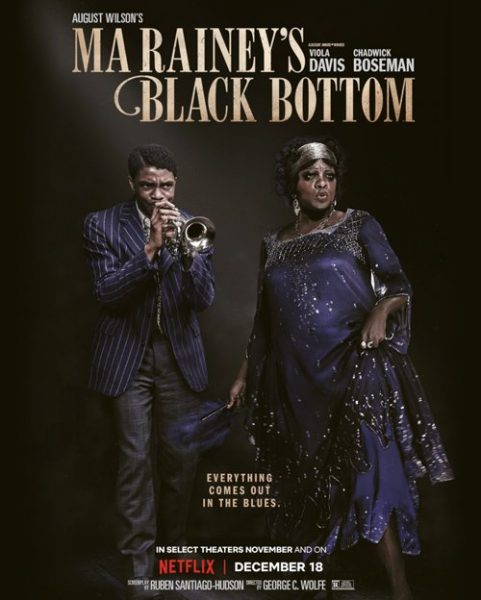 Just as every premiere of an August Wilson play on Broadway was a major event, every film based on his plays should shake the earth beneath our feet. Especially for those of us who, being white, get to know Wilson’s characters from the outside looking in, film adaptations like “Ma Rainey’s Black Bottom” should be a clarion call for all of us to listen actively, experience deeply, break some bread, and renew our commitment to those ever-elusive concepts of social justice and true empathy.

Put simply, this movie is the real deal. I hate subscription services, but when I heard Netflix was bankrolling this one, I immediately signed up. There are other good things to watch but “Ma Rainey’s Black Bottom” represents one of the most important cultural moments we’ve seen in many years, regardless of the screen’s size. Netflix’s commitment to Denzel Washington’s vision to film August Wilson’s full, 10-play cycle is the main reason you fence-sitters should join on in.

If you already know Wilson’s work, I’m preaching to the choir, but for those who have never witnessed Wilson’s genius in action, George C. Wolfe’s brilliant, compact version of “Ma Rainey’s Black Bottom” will give you a crash course. Set in a Chicago recording studio in 1927, Wolfe opens up the world of the original play to include strategic shots of life outside the confines of the play’s original location. Ruben Santiago-Hudson, a Wilson veteran whose production of Wilson’s “Jitney” wowed audiences at Arena Stage not too long ago, has adapted the script, compressing the action of a full-length opus to 94 minutes (which, sadly, seems to be our current attention span, movie-wise).

The historical Ma Rainey’s career began in the late 1800s, in the Minstrel Show circuit which was one of the few ways black entrepreneurs were allowed to make good money in the south. Her tent shows packed the house. One of the many attractions of her show was her outsized personality and her wicked, double-entendre lyrics (“Black Bottom” refers to a dance craze as well as, well, you know). By the 1920s, her slower, more sensual style of blues was starting to give way to a more up-beat kind of jazz. The new wave was represented by artists like Louis Armstrong and his Hot Five, but is embodied in August Wilson’s world by the character of Levee, an ambitious cornet player whose geniality masks a hurt and an anger so profound they prove to be his undoing.

The film begins as Rainey’s band assembles in a hideously run-down basement for rehearsal. Three of the band members — Toledo (Glynn Turman), Cutler (Colman Domingo), and Slow Drag (Michael Potts) — have clearly adopted the discreet, obedient posture of professional session musicians, and gladly take their orders from Ma Rainey, who after all is their collective meal ticket. Levee, however, impatient with playing the same old stuff, has his sights on forming his own band. His contempt for Rainey eventually boils over and Rainey ultimately fires him, but not before we learn the roots of Levee’s fury and ambition. In two heart-stopping monologues, Chadwick Boseman’s Levee lays bare the horrors of the Jim Crow south, and the bitter disillusionment of a man who has lost faith in everything but his switch-blade.

Outside the studio there are tensions galore too, and not just with whites. Wolfe doesn’t shy away from the tensions within Chicago’s black community, which we see in a long tracking shot as Rainey and her small entourage prepare to drive to the studio. Rainey (Viola Davis, whose Oscar-worthy performance is a master-class) has to make her way slowly through the lobby of a hotel occupied exclusively by middle- and upper-class blacks.  Their disapproval of Rainey, whose bisexuality had made her notorious, is palpable. You can see Rainey’s defiance in the way she locks arms with both her nephew (the charming newcomer, Dusan Brown) and her lover, Dussie Mae (who is given a brilliant turn by Taylour Paige) for the long walk to her car.

Viola Davis’ Rainey is not a heroine in the traditional sense. She is every inch the diva, and unless you know her back-story and the history of her era, Rainey’s behavior can come off as ridiculously over-the-top. But her constant demand for respect — right down to holding up the recording session until her contractually-obligated bottle of Coke arrives — comes from her knowledge of what she’s worth, and her knowledge of the contempt white studio owners have for black artists. She’s earned the right to her arrogance and needs to be arrogant just to survive, and in a brilliant monologue, Davis’s Rainey lays out why she must behave the way she does.

But the moment that stands out, raises tears as I write this, and the greatest moment on film I have ever seen (and I’ve seen a lot, believe me) is Bozeman’s performance as Levee, and his raging denunciation of God. This pivotal moment is made all the more gut-wrenching because of the reality that Boseman, a man of faith, was silently battling cancer during filming — and sadly, he lost that fight. Here was Levee giving full rein to the darkest spiritual moment you will ever see, condemning God for His indifference to suffering. So much went into this moment, at all levels, that you would have to be made of stone to remain unmoved. Even a posthumous Oscar for Boseman, richly deserved, cannot begin to match this towering turn.

I sincerely hope that foreshortened movie treatments like this one open audiences up to the experience of a full-length Wilson production, live and onstage. We now have a whole phalanx of “Wilsonites,” who have mastered his language and who will blow you away with every chapter in Wilson’s 10-play, 20th Century cycle. Let Wolfe be your introduction, by all means, but once the plague has passed, let the stage show you what Wilson is really about.