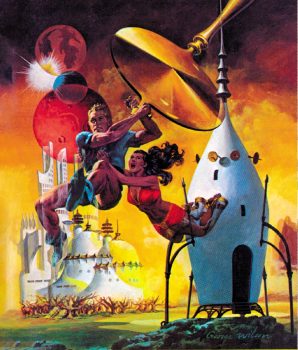 Flash Gordon, the “space opera” science fiction hero, has appeared in many media. Beginning with an artistically-aware comic strip by master comic strip artist Alex Raymond, Flash has appeared in radio, television, and film series (including a Filmation animated production), a 1980 feature-length film, and multiple comic books. In the early 1970s, “Flash Gordon” was also a series of novels which balanced Flash’s vintage pulp origins with more contemporary and complex science fiction stories. The first four books are credited to Alex Raymond and Con Steffenson (the latter being the pen name of Ron Goulart), but were actually entirely the work of Steffenson/Goulart. The novels have recently received a new incarnation as audiobooks by Oasis Family Media as part of its “Paperbook Classics” series. The series is read by gifted voice artist Johnny Heller, who imbues aspects of performance and theatricality to the novels.

…theatrical themes…are certainly and unexpectedly present in these exciting novels…

This first book of the series, “The Lion Men of Mongo,” is closest in the retro-future spirit and adventure of the original comic strip and 1930s movie serials. Flash Gordon, his girlfriend Dale Arden, and his friend and mentor, Dr. Zarkov, crash land on a planet ruled by the evil emperor, Ming the Merciless. Ming decides that he will wed Dale, regardless of her feelings about the matter. Flash and friends must thwart Ming’s plan, with Flash periodically helped by Princess Aura, Ming’s daughter. In a role similar to Princess Jasmine in Disney’s “Aladdin,” Princess Aura, unlike her autocratic father, sometimes dresses as a commoner and slips out of the palace to live among the ordinary people.

In addition to the theme of the tyrant vs. the rights of the people, there are gadgets galore. Devices include blaster pistols and the flying belt, the latter of which we learn “was designed so that the wearer could control his descent.” With an academic background in linguistics, this reviewer was especially interested in the marvelous, micro-miniaturized “lingual translator” device which Dr. Zarkov implants in Flash, Dale, and himself. Zarkov “guaranteed it would translate any written or spoken language they encountered and enable them to respond in kind.” This allows the trio to understand everyone they encounter on any planet.

Johnny Heller, as noted above, is a gifted voice artist with a robust delivery and a gift for accents. He gives various characters on Mongo, and other planets, exotic accents. The lion man with whom Flash has the most contact is given a Scottish accent, for instance. In another novel, he uses an Irish accent for the forest people.

We at the Maryland Theatre Guide are always interested in theatrical themes, and these are certainly and unexpectedly present in these exciting novels, especially “The Space Circus.” Here Flash has been captured and, along with other beings kidnapped from other worlds, is forced to perform in an interstellar carnival. Flash’s act is described in the “shimmering glare fill[ing] the amphitheater,” with him performing trapeze acrobatics to thunderous audience applause. In addition to the earthling Flash as circus acrobat, we also have a beautiful equestrian girl, cosmic clowns, and a hawk-man from the planet Mongo flying high above the circus audience. Here it is up to Dr. Zarkov and Dale Arden to save Flash from the evil “space circus.”

Another adventure, “The Plague of Sound,” also has a significant performance element. Flash and Dale, the latter in evening gown, arrive for an evening concert in a dome-shaped municipal hall which seats 20,000 people. After a robot usher with a flashlight conducts them to their floating chairs where a concert program pops out of the arm of the chair, Dale states: “I still prefer real musicians. Just listening to tridimensional projections is not my idea of music!” As they prepare to listen to the light strains of the “Planet Suite No. 3,” they, and the rest of the audience, are assaulted with “dissonant sounds and nerve shattering noises” of high frequency which break glass and drive the audience to despair, beginning a “plague of sound” by the musician, Pan, an evil pipe organist using “sound and music to cause severe destruction” and terrorize a planet. It is up to Flash and Dale to save this world from the tyranny of bad music.

The strongest story is the fourth novel, “The Time Trap of Ming XIII.” The story has its share of retro-future and pulp descriptions. Flash, for example, is described as “a strappingly muscular man with curly blonde hair, blue eyes, and a deep solar tan,” while Dale is “a slender, dark-haired girl in her early twenties, dressed in a pale green stretch blouse, wide crimson belt, and informal space travel skirt.” At the same time, the audio novel touches on a number of broader concerns of the 1970s, when the novels were written, including the threat of pollution during a time when environmentalism was coming into its own. Issues of feminism emerge as well, as when Dale criticizes Flash for his sense of “male superiority,” while the time-traveling thugs are “male chauvinists of the future.” The theatre/performance motif is also present when Flash’s friend, Prince Barin, prepares to attend a holographic performance of the H.G. Wells classic The Time Machine.” “Not science fiction!” the ingenious inventor Dr. Zarkov groans. Humor is also a strong point of the novel, as two inept and comic evil henchmen, Larry and Kyle, are sent back in time by Emperor Ming XIII (a descendant of Ming the Merciless far in the future) to kill Flash during an earlier time period. Flash himself swings back-and-forth between the past and future on a literal pendulum of time, to prevent his own murder.

While these stories bring back memories of childhood heroes and reading comic books and adventure stories, these novels are written on an adult level, with “Time Trap” boasting fairly complex time theories based on Einstein, as well as erudite vocabulary, using terms such as “a priori,” “a posteriori,” and “poisonous effluvium.” No longer simply a space opera or western set in space, this work offers more sophisticated science fiction themes regarding both the consequences of time travel on past and future events, as well as some degree of social awareness on the part of the characters. Like the characters themselves, the books develop a bit more depth and complexity as the series progresses.

This excellent and entertaining series is available through Oasis Family Media in both CD and digital streaming formats. Clips of these and other audiobooks can be heard before ordering here.