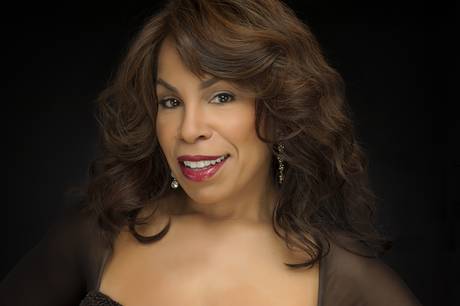 The sad news came early on Wednesday, January 13. Delores King Williams
had died during the night from an aggressive cancer (she kept secret
from her friends). No longer will see her brilliant smile that would
light up the room. No longer will we hear her amazing voice with a
mezzo-soprano range, reminiscent of Aretha, Peggy Lee, and a bit of Ella
in the mix. Add to her talents a comic bent that popped up in her
performances with the Capitol Steps, the popular satirical group that
took her all over the world.

“Dee was unique, always positive and uplifting,” fellow Capital
Steps performer, Corey Harris, wrote on her Facebook page. “The world
is not as bright without you,” noted Bobby Smith, who worked with
Delores early on in his career, and most recently at Signature Theater
in Virginia. Perhaps the most poignant post came from Janet
Davidson-Gordon, a co-worker at Capitol Steps and close friend in
Columbia. “Soar high, dear Delores. I’m blessed to have known you.
You have made me laugh more times than I can count. I’m in Florida and
it almost never rains all day, but the sky is crying with me.”

Kevin McDonagh, an original Young Columbian who shared his talents at
many events in Maryland, connected with Delores at the Ellicott City
fundraiser. “She was on my sunny side of the street that day,” he
commented, “and I’m grateful for the kinship with such a beautiful
soul.” Dancer/choreographer Charlie Abel recalls meeting Delores at a
“Labor of Love” benefit where fell in love with her right away.
“We gabbed and hugged and laughed like we had known each other for
ages…she will have the angels cackling up to high heaven.”

Delores King was born in Baltimore and spent her final days at her
mother’s home in Catonsville. Columbia was home during her early
singing career, and throughout most of her professional and private
life. She studied music at the Peabody Conservatory and earned a degree
at Virginia Commonwealth University. She performed in musicals, plays,
cabarets, commercials, concerts, and video productions. Highlights
include international appearances at the North Sea, the Montreux and
Vienna Jazz Festivals, concert tours of India, Egypt, Russia, Kenya, an
Australian production of “Porgy and Bess,” and a gig at the White
House.

During a “Razzle Dazzle” radio podcast at Howard Community College,
Delores talked about singing solo for the United States Army Band. Her
one-woman shows were popular at Strathmore and the Kennedy Center where she sang at every New Years Day celebration. Locally, she was always
part of the “A Labor of Love” benefits, starting in 1988, the last
“Dancing for Divas” event in 2016. She wowed the crowd at the 2018
“Save Ellicott City” benefit, held at Howard Community College.

Dee was privileged to work with stellar artists, Betty Carter, Jessye
Norman, Vanessa Williams and Quincy Jones, among them. She was a winner of a Downbeat magazine award, a semi-finalist in the Thelonious Monk Vocal Competition, a winner of the “Billie Holiday Vocal Competition,”
a Helen Hayes Award Nominee, and Audie award winner for book narration.

She toured with the Smithsonian Jazz Masterworks Orchestra in a
“Tribute to Ella Fitzgerald” and the debut of “I’m a Woman! The
Unbelievable Life and Music of Miss Peggy Lee.” Delores can also be
heard as the recurring character of Dr. Mildred Wyeth in the “The
Death Lands” audio book series.

As a Young Columbian, Dee will be remembered as one who shared the dreams of founder Jim Rouse. Her fans of the Capitol Steps are smiling at her memory. Meanwhile, Hollywood actor, Tico Wells, wrote his thoughts
online, sharing memories with his buddies from Columbia Center for
Theatrical Arts. “I met her in the Junior Young Columbians around
1978. She carried herself cool, talented and sexy. A jazzy operatic
voice. Definitely a top singer. She commanded respect and she got it. My
honor to have shared the stage with the Diva!”

In keeping with her privacy, no funeral arrangements have been made
public.