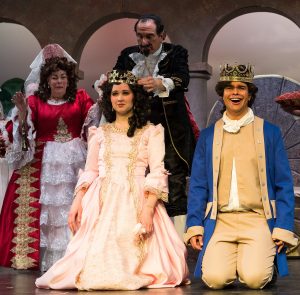 “A Gilbert and Sullivan Drawing Room” cleverly combines a Zoom meeting, the lives of G&S, and musical highlights from past VLOC productions, such as the close to “The Gondoliers,” pictured above. Photo by Harvey Levine.

In what it bills as its first film, Victorian Lyric Opera Company of Rockville, Maryland, has produced “A Gilbert and Sullivan Drawing Room.” Directed by Erica Ferguson with cinematography by Scott Nunn, this production uses an online Zoom meeting as a framing device. The show begins as a video meeting between an uninterested teenager, her eccentric grandfather, and several other characters playing a trivia game together. This serves as the point of entrance to the main story, which is a fabulous exploration of the lives and careers of the famous duo, lyricist W.S. Gilbert and composer Arthur Sullivan.

… the show is especially clever for including seldom-heard works and exploring new ideas.

Kenneth Derby (Gilbert) and David Merrill (Sullivan) come in for high praise as lively and charismatic incarnations of the two comic opera legends they portray. Selections from their comic operas are interspersed throughout the production, with pieces included from both popular and lesser-known works. Staples such as “I am the Very Model of a Modern Major General” (“The Pirates of Penzance”) and “It Really Doesn’t Matter” (“Ruddigore”) appear as expected, but the show is especially clever for including seldom-heard works and exploring new ideas. In terms of the former, audiences will enjoy “Little Maid of Arcadee” from “Thespis” in a poignant, standout performance by Erin Ridge. This lesser-known work is from the first Gilbert & Sullivan opera, of which only a couple of songs survive. “Thespis” is never performed. “Never?  Well, hardly ever,” to borrow one Gilbert’s most famous lines.

Similarly, there is a unique response to current criticism of “The Mikado” and what many see as its condescending treatment of Japanese culture. “Three Little Maids from School Are We,” sung beautifully by Sarah Robinson, Andréa Ochoa, and Hannah Fan, eschews the Japanese setting and presents each maid in a different Zoom background — one in a drawing room, one in outer space à la “Star Wars,” and one under water. We look forward to VLOC putting on a future production employing one, or all, of these fun stage sets.

The show is also educational in that we learn more about the lives and backstories of these two artists and their works. For example, in the performance of “First You’re Born” (from the lesser-known work, “Utopia, Ltd.”), it is revealed that Gilbert was kidnapped at the age of two while his family was on holiday in Italy. Also discussed is the Oscar Wilde story behind the opera “Patience,” as well as creative disagreements between the two showmen. Perhaps the most enjoyable moment is when the actors playing Gilbert and Sullivan sing a duet from their own works.

This production is made possible through editing of new film footage with excerpts from past VLOC performances. This allows some parts of the show to appear with full accompaniment, while others are presented with solo piano (played superbly by Erica Rome). The show is augmented nicely with Victorian costumes, in both recreating Gilbert and Sullivan musical pieces as well as in the dramatic story of their lives. Some are filmed out-of-doors.

Overall, this production, adapted by Erica Ferguson, Scott Nunn, and Helen Aberger from an original work by Stanley German (written for VLOC in the early 2000s), is a very good Gilbert and Sullivan experience, especially once we leave the Zoom setting and fall into their world. The show is recommended not only for Gilbert and Sullivan music fans, but anyone interested in seeing how Victorian culture continues to enrich our lives even in the present day.