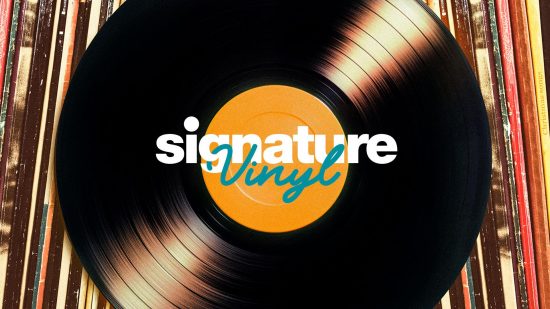 Signature Theatre’s cinematic concert ‘Signature Vinyl’ is available for streaming through May 6, 2021.

As the holiday season winds down, you might be on the lookout for something that isn’t a Hallmark holiday movie, a show to binge watch, or a 2020 retrospective of highlights (lowlights?) from the eventful year to which we just gave the kiss-off.

Might I recommend some fantastic tunes performed by some of the brightest talents in the Washington, DC area? You can rock out to songs made famous by Billy Joel, Stevie Wonder, the Beatles, Elton John, and many others in the comfort of your own home courtesy of “Signature Vinyl.”

“Signature Vinyl” is not only a playlist of phenomenal tunes but truly a showcase of regional singing artists and the creative resilience of Signature Theatre. Its associate artistic director, Matthew Gardiner, conceived, directed, and edited the finished product into an intimate, stunningly produced series of musical nuggets. Gardiner was assisted in this endeavor by Justin Chiet, of Chiet Productions, as the cinematographer and camera operator. Gardiner and Chiet used the camera as a kinetic and dynamic presence, capturing the mega-watt performances of the veritable who’s who of the DelMarVa region’s talent.

The opening shot takes the viewer from the sidewalk outside Signature’s Arlington home and through the doors, up the stairs, down corridors, and eventually up onto the roof for the R&B standard “September,” made famous by Earth Wind & Fire, and performed here by Solomon Parker, III. Parker makes the song his own and clearly exudes the spirit and soul of the original. This performance kicks off the concert in high style.

Two things should be noted. All the performances were filmed in outdoor spaces around the DC area under the strictest conditions and watched over by medical professionals. The curious can even read about their health protocols on the Signature Theatre website, here.

The second notable fact is the involvement of Mark G. Meadows and the Movement. Meadows, serves as the keyboardist and musical director and is the backbone of the entirety of the performances. An experienced musician, recording artist and teacher, Meadows leads the other musicians effortlessly. Meadows is joined by the six-member Movement, also providing accompaniment in a variety of styles — Motown, jazz, folk, and rock and roll. Eliot Seppa plays bass, with Deante Haggerty-Willis and Noah Pierre taking care of the guitar. These gentlemen are joined by Try Sorrells on saxophone, while Jack Kilby and Dante Pope provide essential rhythm on the drums.

What about the singers? Gardiner assembled a star line-up for this virtual concert film. After Parker’s “September,” Shayna Blass follows with her own rooftop rendition of “Won’t Be Long.” Like a force of nature, Blass uses her trumpet-like voice wail out the soulful tune. Kanysha Williams takes one of Whitney Houston’s hit songs and takes a different approach with “I Wanna Dance with Somebody (Who Loves Me).”

Throughout “Signature Vinyl,” we hear wonderful new covers of cherished songs, as if we were flipping through our own record collection but listening to new renditions that breathe new life into these old friends.

On a waterfront dock, we hear Shayla S. Simmons, in her sultry alto voice, perform the Stevie Wonder tune “All I Do.” Stevie Wonder is also represented by a cover of “Summer Soft” by Inés Nassara, now in a lovely garden setting. Another lush, green location is the perfect backdrop for Katie Mariko Murray’s performance of the Joni Mitchell song, “Cactus Tree.”

John Lennon and Paul McCartney provide the next well-known tune in “Can’t Buy Me Love,” sung here with verve by Kevin McCallister, recognizable from such Signature productions as “Ain’t Misbehavin,” “Blackbeard,” and “Titanic.” Jade Jones (Signature’s “Elmer Gantry”) brings her stunning vocals to “Money (That’s What I Want),” an old tune by MoTown’s Janie Bradford & Berry Gordy. A leading lady from many Signature shows, as well as other DMV stages, Nova Y. Payton is joined by Inés Nassara and keyboardist for a taste of Marvin Gaye with the skillful mash-up of “Inner City Blues (Make Me Wanna Holler)” and “What’s Going On,” performed in a disused basketball court. Another Signature leading player, Tracey Lynn Olivera, heads back to the rooftop for a poignant rendition of “Summer Highland Falls,” written by Billy Joel.

Notably, all of the singing talent has graced Signature’s stages over the years and this film is such a fitting showcase for these talents that have had to pivot off of the stage and find other ways to exercise their skills and artistry. This production brings back some of the glory for this cast of dynamic performers.

We get more Motown with a soaring duet by Christian Douglas, also doubling on keyboards, and Awa Sal Secka with “Ain’t No Mountain High Enough.” Payton returns for another Stevie Wonder cover, “Overjoyed,” followed by a laid-back version of Elton John’s “Goodbye Yellow Brick Road,” lovingly sung by Rachel Zampelli. Meadows takes vocal duties as well as keyboards on a stylish performance of Bruce Hornsby’s “The Way It Is,” featuring the delicious saxophone playing of Trey Sorrells. Another duo stands tall in the basketball court when Crystal Moser and Maria Rizzo add their personal stamp on “O-o-h, Child.”

The penultimate performance is another duet, this time reaching back to the early 1960s into the Carole King and Gerry Goffin catalog. “Will You Still Love Me Tomorrow” and “Up on the Roof” are performed on a rooftop at dusk by Natascia Diaz and Robbie Schaefer who also plays the guitar.

The finale of the entire concert is a bold and energetic performance by the band and Rayshun Lamarr taking no prisoners with their version of Stevie Wonder’s “Signed Sealed and Delivered.” Had there been a cover on the rooftop for this performance, it would have been lifted for sure.

You have to hand it to Signature Theatre and Mr. Gardiner for carefully and creatively figuring out how to present a first class concert filmed for appreciative audiences, featuring some amazing singer-performers. If the pandemic continues to stymie onstage, in-person performances into 2021, this is one theatre that has found a work-around so that it can still offer a rousing experience. Either way, I look forward to their next production, online or otherwise.

Advisory: Suitable for all audiences, but would likely appeal to age 12 through adult.