Theatre Review: Spooky Action Theater’s ‘The Lady from the Village of Falling Flowers’ 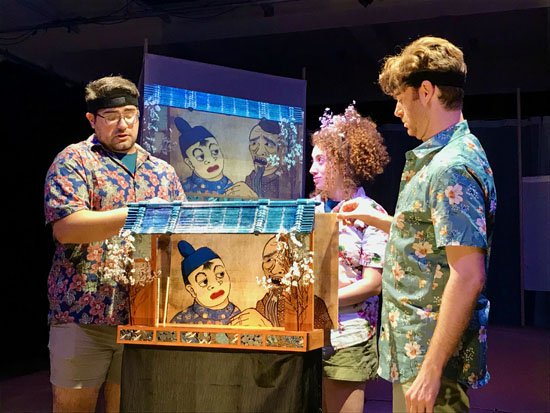 Nothing gold can stay. So ends the Frost poem and begins our protagonist’s panicked search for a poet to immortalize the orange blossoms in his gardens. But who will be able to write poetry worthy of the flowers? “The Lady from the Village of Falling Flowers” premiered in September 2019 at the 14th Annual Provincetown Tennessee Williams Theater Festival in Massachusetts. Now available via Spooky Action Theater to online audiences, this little-known Williams’ one act is assumed to have been written during his time as a student at the University of Missouri. Williams based the play on Arthur Waley’s translation of the 11th century Japanese story, “The Tale of Genji” by Murasaki Shikibu.

“The Lady from the Village of Falling Flowers” begins with the Emperor of Japan (Dylan Arredondo) giving an impassioned speech to his Prime Minister (Jared H. Graham). As the Emperor waxes (less than) poetic about the orange blossoms, the Prime Minister tries to get him to focus on more important things, like marrying a princess. The Emperor declares he will marry any woman who can write him a beautiful poem about the orange blossoms and sets up a contest reminiscent of “The Princess and the Pea.” Enraged by the lackluster poetry of the princesses, the Emperor walks the gardens alone before stumbling upon The Lady (Melissa Carter). In a twist of fate, the Emperor and The Lady fall in love. The only trouble is, neither knows who the other truly is.

Helen Hayes Award winner, Natsu Onoda Power, directed the show and designed and created much of the artwork, puppets, and scenery. Her choice to stage the first known performance of “The Lady from the Village of Falling Flowers” in the kamishibai style was especially engaging. Each scene included different types of puppeteering ranging from more traditional-looking paper cutouts and masks (made by Onoda Power) to finger puppets (made by Carter). The actors also served as narrators and often spoke in unison. The miniature stage was stunning with moving screens and sunset paintings that were reflected in the actors’ painted night sky clothing.

Despite the beauty and creativity of the set and the nods to kamishibai, some of the performance was slightly jarring. Between scenes the actors did impromptu dances, including a salsa-strip tease, and part way through the show, Mario music started playing. However, the actors’ frenetic energy oddly matched the emotions of quarantine, so it was at least in keeping with the times.

Overall, the incredible art and innovative storytelling ensured a successful performance from Spooky Action Theater. As the pandemic continues, I am grateful for the DC theater community continuing to make beautiful art accessible to the public.

Running time: 30 minutes with no intermission.

“The Lady from the Village of Falling Flower” will be available online through January 14, 2021. Online access can be purchased here.  Spooky Action Theater’s upcoming works and virtual events can be found here.