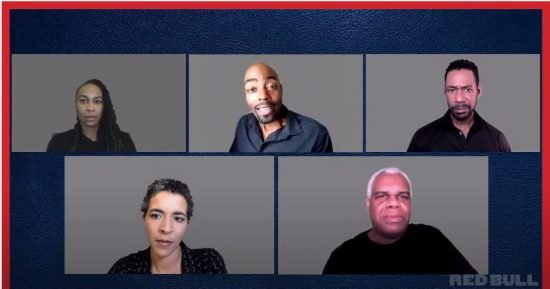 Members of the company of Red Bull Theater’s online reading of “The African Company Presents Richard III,” online this week only.

When history and theatre work together, the results can be a perfect match. Even when the subject matter is a painful and violent episode from our nation’s theatrical and racial history. This is very true of Carlyle Brown’s 1994 play, “The African Company Presents Richard III.” The play combines historical fact with the panache of theatre to make an indelible impression of an episode that took place almost exactly two hundred years ago this year.

Red Bull Theater, known for revitalizing classic plays for modern audiences, assembled a stellar cast to present a reading of Brown’s play. It is available for just this week for free via the theater’s YouTube channel. The story is a fictionalized account of the events of 1821 when the then prestigious African Grove Theatre, the most commercially successful black playhouse in New York City, went up against a rival white theatre in presenting Shakespeare’s “Richard III.”

The play really speaks for itself and the cast rises to the challenge of this demanding script.

With wit and grit, Brown’s play brings this event to life while commenting on the racial tensions of the time period. Don’t be put off by the title if you are averse to Shakespeare and do not be deceived that it is a performance of Shakespeare’s tragic, historical play. “Richard III” is part of the fabric of the play. It was one of the titles the African Grove Theatre, known popularly as the African Company, presented to great acclaim by audiences of color as well as white patrons during its heyday. Founded by William Alexander Brown (Clifton Duncan), the company was known for its vibrant presentations of Shakespeare plays, performed by all-black casts. Audiences thronged to their productions, often starring leading actor, James Hewlett (Dion Johnstone) in roles such as Othello (the first notable black man to play the role) and the hunchbacked King Richard. White audiences wanted to see their productions too, and it was the beginning of trouble.

The problem is “Richard III” was also a popular title in the mainstream theaters of the time, including the Park Theatre, managed by Stephen Price. Known for bringing in esteemed British actors, the Park Theatre provided the upper crust of 1800s New York society with culture to spare. Yet Price felt the African Company provided enough competition to cause problems for the establishment (read “white”) theatre company. The play examines the lives of the African Company members and the Price’s reaction to their success. As our collective and checkered past of racial relations between whites and blacks is an indication, the people of color in this event did not come out on top.

The history of this time period fascinated me, as a student of American history and a huge theatre buff. I had heard of the Astor Place Riots of 1849 when tensions between rival American and English tragedians fomented a civil disturbance that injured more than 100 and left nearly two dozen people dead. But I was not as aware of the incident between Park Theatre and African Company of 1821, nearly 20 years before. The rivalry between the black theater and the white theater, interesting to note, also took place 40 years before the shots were fired in the American Civil War. In 1821, the members of the African Company had to maintain day jobs as domestics or other menial laborers, and their station was not very high, even in the culturally rich milieu of New York City.

It is into this atmosphere Brown’s play injects the very personal story of these African-American theater artists, using language ripe with colloquial flourishes and the grandeur of Shakespeare’s verse. Actors Johnstone and Duncan, as Hewlett and Brown, respectively each bring depth to their portrayals of the two leading actors. Joining them, Washington DC’s own Craig Wallace brings humor and gravitas to the role of Papa Shakespeare, an African transplant who is a poet and griot. The ladies in their lives are played distinctly by Jessika D. Williams as Sarah and Antoinette Robinson as Ann. They bring a worldly perspective to the theatrical men’s lives.

Edward Gero, another DMV-based actor, makes a welcome appearance as the white antagonist, Stephen Price. (Fun Fact: Gero played Scrooge for many years in the Ford’s Theatre production of “A Christmas Carol: A Ghost Story of Christmas.” In recent years, Craig Wallace has performed as Scrooge, including this year’s radio play version of the classic.) Paul Niebanck rounds out the cast of actors as Price’s accomplice, the NY constable.

Director Carl Cofield keeps the presentation simple and straightforward for this play reading, allowing for a few visual treats along the way to illustrate moments in the drama. The play really speaks for itself and the cast rises to the challenge of this demanding script. It is well worth the time and is only available until Friday, January 15 at 7 pm.

One final note: for audience members who wish to engage with the playwright Carlyle Brown, director Carl Cofield, and members of the company, there is a “Bull Session” on Thursday, January 14 at 7:30 pm. For more information on the talkback session, click here.

Running Time: One hour and 50 minutes, with one intermission, streaming.

Advisory: Be aware this play deals with the theme of racism and contains racial slurs, including the “n”-word.

“The African Company Presents Richard III,” Red Bull Theater’s online play-reading, is available until 7 pm, January 15, 2021 on the Red Bull Theater YouTube channel, by clicking here. Access to the recording of the live-streamed event is free, but donations are accepted.