Theatre Review: ‘The Other’ by Peace Mountain Theatre Company 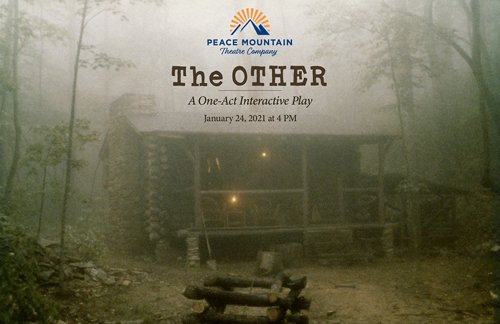 The COVID nightmare drags on and it feels like forever since anyone has been able to watch a live theatre performance. In desperation, I suppose a Zoom play seems better than no play. At least, that was my thinking as I tuned in to “The Other” by Peace Mountain Theatre Company. This was billed as an “interactive play,” where viewers get to be participants in the outcome of the performance. The concept certainly lends itself to curiosity and who could resist the temptation of directing what characters do in a play? It wouldn’t be simply a spectacle, but rather a unique opportunity to stamp something original on an otherwise scripted show. I had to sign up and see for myself.

…it was still fun to watch and wonder what this play will look like once we are all able to enter the theater house again.

The one-act play, “The Other,” part of the Peace Mountain Theatre Company’s Educational Outreach Program, was performed live on Zoom on January 24. It was a story of four young people (Avery, Bennie, David, and Crystal) lost in the woods. Caught in a menacing rainstorm and indecisive on what to do, they discovered a small shack nearby. One of the four, Avery, went to determine whether it was safe to ask for help from whoever was in the shack. However, he returned and described the people as making strange sounds and dressed in unusual garbs. His attitude was one of fear and distrust. Although they remained unsure of what to do at that juncture, they decided to work through their prejudices in order to come to a consensus on what their next move would be.

At this point, the play ceased, and the director, PMTC’s Artistic Director, Laurie T. Freed, instructed everyone to turn on their cameras and commenced the interactive part of the show. The intent was to answer some basic questions: What would you do in their shoes? Is it right to judge people because they look and dress differently than you? The theme of discrimination then took center stage. However, as many people have experienced with Zoom meetings, it wasn’t as smooth in transition as one might expect. I found it particularly amusing when one of the participants, a very young girl, didn’t quite give the politically correct answer the director was likely hoping for and the attention quickly went another direction. As the old saying goes, “kids say the darndest things.” As a public-school teacher for nearly 20 years, I can certainly attest to this.

Overall, I found the play to be a bite-size morsel of entertainment. It was billed as a one-act, but it was more like a micro-one-act. If it had been a little longer with a bit more detail and interaction (especially with respect to character background), this show would have given the audience more to “chew” on. I simply thought it ended far too quickly. I also didn’t think there was much audience input, as the director seemed to want to steer the narrative a certain way instead of letting the participants say where the story would go. Nevertheless, it was still fun to watch and wonder what this play will look like once we are all able to enter the theater house again.

“The Other” streamed on Zoom live on January 24, 2021 by Peace Mountain Theatre Company. For more information, please click here.