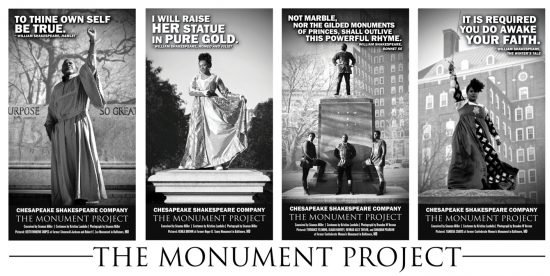 DETAILS: While the city of Baltimore ponders the permanent fate of 4 pedestals where once stood statues of the Confederacy, Chesapeake Shakespeare Company — the city’s third-largest theater company — is undertaking an effort to bring awareness to the need for action with THE MONUMENT PROJECT, a series of photographs that depict black actors from CSC posing in Renaissance costumes on those plinths, which have stood empty since the statues were removed in 2017.

The campaign will kick off Wednesday, Feb. 24 at 10 a.m. at CSC when the company unveils the portraits – taken last November – of 7 actors interpreting Back Lives Matter with an assist from passages from Shakespeare’s HAMLET, THE WINTER’S TALE and ROMEO AND JULIET. The photos will make their debut on Wednesday, Feb. 24 on large-scale banners that will hang from the Calvert Street windows at the entrance to Chesapeake Shakespeare Company’s theater building.

Poster-size copies of the photos be available for purchase, with proceeds to benefit CSC’s popular education programs, which serve 16,000 students annually in Baltimore and surrounding counties, and parts of D.C.

The company is presently in rehearsals for its livestreamed production of ROMEO AND JULIET to be broadcast at no cost to Maryland public schools this May.

Chesapeake Shakespeare Company is Maryland’s leading classical theater company, founded in 2002, now with a 266-seat theater housed in an old Downtown Baltimore bank building at the corner of Calvert and Redwood. CSC presents a full season annually of first-rate, professional productions of Shakespeare plays, along with more recent classics such as OUR TOWN. Equity and inclusion in employment, education and community outreach has always been an increasing focus of the company’s mission.

IN ATTENDANCE AT THE FEB. 24 EVENT AND AVAILABLE FOR COMMENT WILL BE:

THE ACTORS PHOTOGRAPHED ARE:

FOR MORE INFO ABOUT THE MONUMENT PROJECT AND CHESAPEAKE SHAKESPEARE COMPANY visit here.