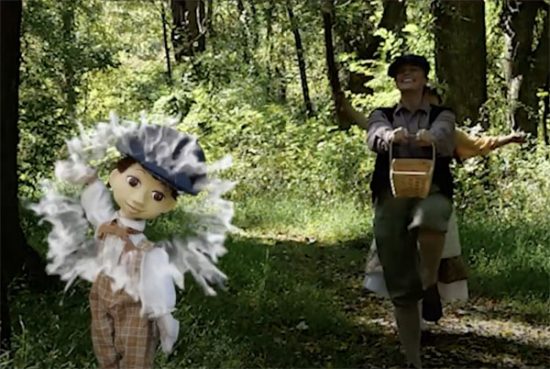 The story of Hansel and Gretel is one of the most famous of Grimm’s fairy tales. The story has had many iterations through the years, notably Engelbert Humperdinck’s famous 1893 opera. While it would seem tailor-made for children, the complexities and length of the opera, along with its Wagnerian-influenced orchestration, may lessen its appeal. To address this issue, Bel Cantanti Opera has produced a shortened version of the work which is more accessible to children. Yet the show is not for children only. The beautiful, English-language production features performers who have excellent voices, highlights aspects of German folk musical traditions, and utilizes traditional German costumes and architecture — all elements that adults will appreciate as well.

The production is directed by Catrin Davies. Performers Ashley Kay Armstrong (Hansel) and Kelly Curtin (Gretel) sing and dance their roles with an engaging combination of talent, skill, and exuberance. Hansel is especially strong at conveying the mischievousness of the young boy which leads the brother and sister to run away and become lost in the woods. The inspiring voice of Gretel provides the show with a steadying presence.

Bel Cantanti founder and musical director, Katerina Souvorova, has done excellent work shaping, editing, and performing the show’s music. Rather than using a traditional orchestra, the show employs only a keyboard, a flute, and a harp. This spare instrumentation serves to bring attention to the folk elements of the score which are rarely highlighted in most productions. Two scenes in particular benefit from this technique. Early in the show,  Gretel teaches Hansel how to dance (“Brother, Come Dance with Me”) and in more purely instrumental form with the Knupserwalzer waltz towards the end of the show, accompanying the closing credits. A fairy tale adventure in the woods is emphasized as the simple flute work evokes nature sounds. While Gretel sings that “birds are singing their song with greeting,” the flute trills wonderfully to suggest birdsong. The harp is similarly used to convey the onset of night and the emergence of stars.

Turning COVID-inspired social distancing into an asset, the opera is performed outdoors in Maryland’s scenic Seneca Creek State Park. This setting, unusual for an opera, provides an unexpected realism to the production. Even better, serving as the house of the evil witch is the park’s culturally significant Grusendorf Log House. Built by German-American Jakob Snyder in 1855, this one-room building was one of the oldest surviving buildings of Germantown, Maryland, before it was relocated to the park in the 1980s to protect it from encroaching development. The rustic German stylistics of the cabin serve as an excellent setting for the main events of the opera.

The performance also includes fantastical elements in the form of special effects. Among them are fire and magic effects, somewhat reminiscent of the Disney movies of the 1970s, and also the use of puppets alongside live performers. It is clear that Bel Cantanti invested a significant amount of work in post-production, and the final presentation rewards this effort. Fades between locations, montage scenes featuring translucent dancers of the Olney Ballet, and scenes with the children’s father (played by Daniel Neer) and the Dew Fairy (Evelyn Tsen, in fine voice) are done skillfully and in a reasonably believable fashion. The traditional German folk costumes by Ksenya Litvak (who also crafted the puppets) are also excellent, helping the production to maintain its sense of time and place.

“Hansel and Gretel” is presented by Bel Cantanti Opera and will stream on February, 6, 2021 at 8 pm EST. For more information, please click here.