Theatre Review: ‘All the Devils are Here: How Shakespeare Invented the Villain’ from Shakespeare Theatre Company 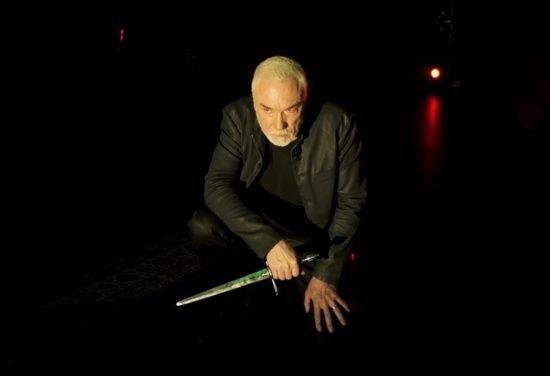 Patrick Page in “All the Devils Are Here.” Photo courtesy of Shakespeare Theatre Company.

Patrick Page could read the telephone book and we would swoon. And when he speaks Shakespeare, his whispers and bellows send shivers up your spine. His lush bass voice resonates long after he performs the prose, poetry, and dialogue in “All the Devils are Here: How Shakespeare Invented the Villain,” (which he also wrote), the online-only production from DC’s Shakespeare Theatre Company.

With these villainous tales of familiar Shakespearean characters and Patrick Page’s interpretation, you will be riveted in this not-to-be-missed show for all to see and hear.

For the lucky ones who saw his devilish role in the Broadway hit musical, “Hadestown,” or the maleficent Scar in “The Lion King,” or cruel Iago in the STC production of “Othello” that earned him a Helen Hayes Award, taking on villains appears to be the chosen mode for the American actor in this 80-minute (wished it were longer) presentation.

Patrick Page begins the one-man show with the cruel words of Lady Macbeth as she wishes to carry out the savage murder of old King Duncan. He whispers, “Come Thy spirits that tend on mortal thoughts.” From this poignant moment, the evil becomes more maddening.

Page performs Shakespeare as the pro he is with merely a few props and boundless energy. At one point he jumps onto a table, then places a chair on top where he sits and recites the turbulent tales of Falstaff and King Hal. When he becomes Richard III, he manages to twist his legs into a pretzel shape to portray this diabolical, disabled character. Such nastiness is even more obvious when he spits out Richard’s words, “I was born with teeth…to bite like a dog.”

Indeed, these devils will scare the bejesus out of you!

Page begins his fascination with the notorious in Shakespeare’s  works from 1590 through 1611. The actor points out that Shakespeare may have been influenced by medieval morality plays and latched on to such evil characters, called “the vice.” These bad guys were soon replaced by romance with loving couples like Romeo and Juliet, around the same time Shakespeare fell in love with a woman “with dark eyes and hair, a Romana, perhaps,” as Page describes her with more than a hint that Shakespeare was keenly aware of racial and social differences.

Prejudice was prevalent during Elizabethan England, and the villain in Shakespeare’s “The Merchant of Venice,” is the moneylender Jew. Page dissects Shylock with the skill of a surgeon. With his head covered in the Jewish tradition and his spectacles pulled from a pocket and placed on his nose, both Page and Shylock question Shakespeare’s motives. This scene was powerful and to the point, and we felt the emotional impact of anti-Semitic stereotypes from Shakespeare’s time to our present.

The show ends with the quote from “The Tempest,” where Prospero seeks revenge, yet another scene where Page rages, “Hell is empty and all the devils are here.” His eyes glare outwardly and we feel a chill. Yet, it is Ariel, the spirit, who inspires forgiveness, and we begin to understand how evil can be turned around. With these villainous tales of familiar Shakespearean characters and Patrick Page’s interpretation, you will be riveted in this not-to-be-missed show for all to see and hear.

This production is directed by filmmaker Alan Paul, and photographer Joey Ruffini, with fantastic lighting design from Elizabeth A. Coco.

Running Time:  80 minutes with no intermission.

“All the Devils are Here: How Shakespeare Invented the Villain,” is adapted from the works of William Shakespeare and written and performed by Patrick Page. It can be viewed online through July. Tickets are $25 with the streaming link available for 72 hours after purchase. To buy tickets or for more information, click here.