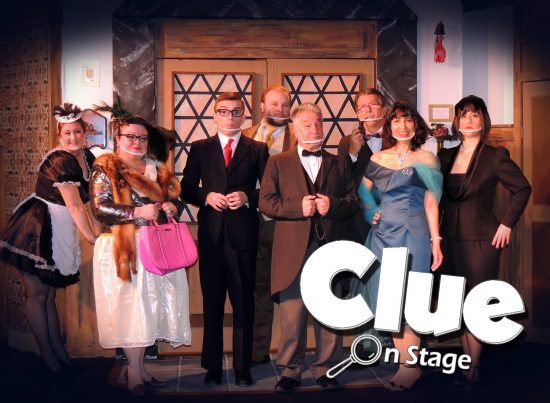 Life is a game, and all the world’s a stage. For “Clue on Stage,” running through March 6 at Way Off Broadway Dinner Theatre, both adages are true.

The play takes inspiration, of course, from the Hasbro board game first released in 1943, but the script stays true to Jonathan Lynn’s 1985 movie starring Tim Curry, Madeline Kahn, and Christopher Lloyd. At the box office, “Clue” was a flop. However, it’s become a bit of a cult classic — which is the likely the reason it spawned the on-stage counterpart.

Directed by Justin M. Kiska, “Clue on Stage” is set in 1954 and rife with references to McCarthyism. Everyone has something sinister to hide, which is precisely why Mr. Boddy assembled the cast of characters that we all know and love: Colonel Mustard (Jordan B. Stocksdale), Mrs. White (Sarah Melinda), Mrs. Peacock (Pam Neely), Mr. Green (Jake Thereault), Professor Plum (Brian D. Kaider), and Miss Scarlet (Jessica Billones). The butler, Wadsworth (Dino P. Coppa, Sr.), welcomes them to the mansion on a stormy evening, which is when murderous hijinks ensue as expected. The remainder of the cast includes Melissa Ann Martin as the maid, Yvette, Megan E. West playing the dual roles of the cook and the singing telegram girl, Trey T. Kiska in the triple role of Mrs. Boddy, the motorist, and the chief of police, and Bill Kiska as the cop.

Just like the board game, “Clue on Stage” is good fun.

Each actor personified their game piece character with aplomb, but Coppa made the most of the rib-tickling script, delivering each line with just the right amount of gleeful and dry drollery. Kiska’s direction provides a quick pace, meaning you have to pay close attention to fully enjoy the one-liners that might otherwise be easily missed. The performances are a bit over the top, particularly at the end, but I’d argue that’s precisely how they should be with a production like this.

It’s been more than a year since I’ve enjoyed a piece of live theater and, of course, safety is at the forefront of everyone’s mind. Way Off Broadway has adjusted its seating to appropriately space out its patrons, and all workers (including the cast, who double as servers prior to the stage and during intermission) were wearing masks. While on stage, the cast wore transparent chin face shields, which provided the least amount of distraction that the necessary facial coverings possibly could.

Just like the board game, “Clue on Stage” is good fun. At a time when any distraction is a welcome one, Way Off Broadway’s production provides an entertaining night of theater.

Running time: 90 minutes with one intermission.