Audio Review: ‘The Fall of the House of Usher’ presented by the National Edgar Allan Poe Theatre on the Air, WYPR 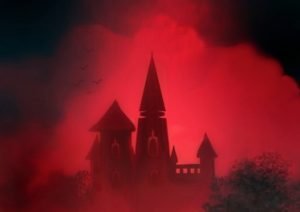 “Please, this way,” says Dr. Maillard, the rascally director of the mental institution in the latest National Edgar Allan Poe Theatre on the Air. “My next patient might seem quite… what is the word…? Yes… normal… Some of my other children, well, you have seen for yourself. The glint of evident madness in their eye… The twisted smile… The tremens in their hands… But not this next gentleman… Affable, self-aware… In fact, frequently despicably overfamiliar… But do not be fooled. A darkness blights his essence. And say the magic word, rest assured, the insidious canker that infects his soul will appear.”

The…series fluctuates between loyal and more freely adapted radio dramatizations of Poe’s tales. This one leans…irresistibly, towards the “free” side.

So begins this performance of “The Fall of the House of Usher,” one of Poe’s most famous horror tales. In the story, the unnamed narrator has been contacted by an old friend, Roderick Usher, asking him to visit at once. When the narrator arrives at the Usher mansion, he finds Roderick behaving erratically. Roderick is distraught that his family line is dying out, and his sister Madeline Usher, with whom he shares the house, is at the point of death. She soon expires, and the narrator assists Roderick with the sister’s burial. Then, on a stormy night soon after, strange sounds are heard moving through the house. Is it a ghost? Or something else?

The Poe Theatre on the Air series fluctuates between loyal and more freely adapted radio dramatizations of Poe’s tales. This one leans decidedly, and we think irresistibly, towards the “free” side. The story is broken into two parts, each telling the same story from a different point of view. Part I is more traditional, told from the perspective of the nameless narrator. In a bold move, Part II presents the narration from the viewpoint of Madeline Usher. Both segments are wonderfully atmospheric, with macabre sound effects, including creaking doors à la “Inner Sanctum Mysteries,” as one would expect in an episode — especially this episode — of the series. Elliott Kashner is excellent as the Narrator, and Carolyn Kashner creates two believably different characters as the Lady Madeleine Usher and an earthy barmaid.  Brian MacDonald is similarly superb and diverse in his roles as a tavern keeper and Roderick Usher.

When asked about the decision to present the story in this unusually creative manner, series creator, director, and star (as the one and only Dr. Maillard) Alex Zavistovich explained: “Our playwright (Professor Richard Hand, of the University of East Anglia in the UK) wanted to look at the Usher story from two perspectives. Doing it this way made for an interesting story arc for the narrator as asylum inmate and gave us a chance to create what for me was a very satisfying audio drama experience, making the house itself a member of the cast!”

Mr. Zavistovich intends in the near future to move the series from the current focus on Dr. Maillard and the Poe horror tales to Poe’s stories of deduction featuring detective C. Auguste Dupin, a character who appears in well-known Poe works such as “The Murders in the Rue Morgue.” Along the way, the series will move the settings more towards present day. Listeners get a taste of this in “Usher, Part I” with an allusion far more recent than Poe. The early interaction at the inn, which is not found in the original story, is written as an homage to a similar scene in the film “An American Werewolf in London.” Such an interpolation has been added to allow a more comedic feel to counterbalance the darkness of later events in the story. Comments Mr. Zavistovich: “This is important in the suspense or horror entertainment genre. The French Theatre du Grand Guignol codified that with what it termed ‘la douche ecossaise’ (the hot and cold shower), where humor is used to keep the audience off guard for the more dramatic or horrific moments to come.”

These episodes and all those of the series have a local Poe-themed component in references to Raven Beer, a microbrewery run by Stephen Demczuk, a long-time supporter of the Poe Theatre’s work. The company produces “many fine Poe-inspired craft beers,” including The Raven, The Cask, and Annabel Lee — names which the Poe aficionado will quickly recognize as based on titles of some of the author’s major works. We eagerly anticipate the upcoming Dupin detective stories, but we wish wistfully that Dr. Maillard could have introduced us to Annabel Lee, who lived “many and many a year ago, in a kingdom by the sea…”

Each part of “The Fall of the House of Usher” runs approximately 23 minutes and can be heard here.