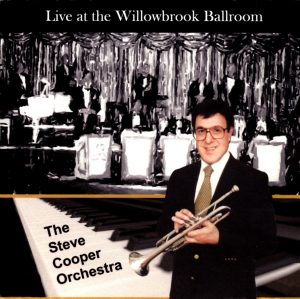 The Steve Cooper Orchestra, “Live at the Willowbrook Ballroom.” Courtesy of Steve Cooper.

The Steve Cooper Orchestra offers a wonderful window into the American musical past, playing ballrooms in the Chicago area and also sharing their music on CD recordings. Mr. Cooper is especially taken with the easy listening “champagne music” of “The Lawrence Welk Show,” this year celebrating its 70th anniversary on American television.

…a wonderful window into the American musical past…

Mr. Cooper’s CDs, “Dancer’s Favorites” and “Dancin’ and “Singin’ with the Steve Cooper Orchestra,” contain many favorites spanning the Great American Songbook. Connoisseurs of the Broadway musical will not be disappointed with smooth versions of “On the Street Where You Live” (“My Fair Lady”), “Just in Time” (“Bells are Ringing”), and “Hey, Look Me Over” (“Wildcat”). The Fats Waller musical “Ain’t Misbehavin” is represented by “I’m Gonna Sit Right Down” and a Latin-inspired “Honeysuckle Rose.” Latin ballroom dances abound with cha cha, rhumba, merengue, mambo, samba, and salsa, all represented on these two CDs. True to the Lawrence Welk style (steady rhythms, flutes, strings, muted trumpets, and an accordion), we also have waltzes, a polka, a foxtrot in the original Welk arrangement (“That Old Black Magic”), and, of course, “Bubbles in the Wine,” the theme song of Welk’s show once famous for its bubble machine.  Other TV shows from the 1950s are saluted in “The Honeymooners Theme” and “Melancholy Serenade,” the latter the theme of “The Jackie Gleason Show.” Mr. Cooper enters a somewhat later musical era with a Beach Boys medley including “Fun, Fun, Fun” and “Barbara Ann.”

For a change of pace, we recommend Mr. Cooper’s CD “Dixieland,” featuring New Orleans’s favorites such as “Just a Closer Walk with Thee,” and “Do you Know What it Means to Miss New Orleans?” In our view, the standout arrangement on this CD is “That’s a Plenty,” in the “Big Band Dixieland  sound of the Bob Crosby Orchestra from the 40s and 50s,” Mr. Cooper explains.

“Big Band Broadcast Segment,” the most creative of Mr. Cooper’s compact disc efforts, is particularly engaging. Here Mr. Cooper and his musicians play arrangements of different famous ballroom orchestras of the big band era. In an actual radio broadcast recorded in a bank-turned-theatre, the maestro increases the ambience by adding different announcers introducing imaginary broadcasts from different grand ballroom locations from the past. There is a decided regional flavor in his choice of society bands, as many were headquartered, at least temporarily, in the Chicago area. These included Dick Jurgens, Eddy Howard, and especially Wayne King. Mr. Cooper also showcases his band’s penchant for swing music with such staples of big band jazz as Tommy Dorsey’s “Opus One,” Woody Herman’s “Woodchopper’s Ball,” and, of course, Glenn Miller’s anthem of the swing era, “In the Mood.” Other ballroom sets are filled with period atmospherics, augmented greatly by announcers waxing enthusiastically of “music in the (Freddy) Martin manner from the Coconut Grove of the Ambassador Hotel located on fashionable Wilshire Boulevard in Los Angeles, California;” “Ben Bernie at the Century of Progress Exhibition along the lakefront from the beautiful city of Chicago;” “From the matchless Trianon, the world’s most beautiful ballroom from Chicago’s south side, the golden saxophone of Wayne King, the waltz king. A matchless evening of beauty, melody, rhythm, and romance.”

Mr. Cooper provides this with a sense of that time. Between the live numbers, there is the sound of static…or is it the surface noise of an old 78 rpm record? Or is it something else? Listen to Mr. Cooper’s CD to find out, at which point you will hear the movie tune “Laura’s Theme” from “Dr. Zhivago,” “The Best Things in Life are Free” from the Broadway show “Good News,” and “Rain,” an arrangement Mr. Cooper wrote in the Lawrence Welk style at age 16. Incidentally, Welk’s orchestra once played the Willowbrook Ballroom in 1970, although Welk did not conduct.

Mr. Cooper himself tells the Maryland Theatre Guide that he has been a Lawrence Welk fan from the very start. “I saw the first Welk show when it went national on July 2, 1955 — I was seven years old! That morning my mother was reading the newspaper and said “There’s a new show on tonight — maybe we should watch it. It’s called ‘The Lawrence Welk Show.’ We did — and the first thing I saw was the ‘Bubbles in the Wine’ theme and loved it. Then I saw they were all wearing white tuxes and playing Irving Berlin’s ‘Say It with Music.’ I thought right then, ‘That’s what I want to do the rest of my life.’ I can’t believe 40 years later I had official access to all 11,000 arrangements of the Welk orchestra! And 45 years later, I was on stage with four of the 1955 Welk musicians. Through a series of coincidences, I got either to meet or talk on the phone with almost every musician and singer on that first 1955 ‘network’ Welk show. And now I’m still friends with their kids.”

Looking beyond the COVID era, Mr. Cooper is anxious to get out and once again play for ballroom dancers. Currently, he is working on new transcriptions and orchestra arrangements until late in the night and is eager to play for dancers in new venues. He is also working on a book about his musical career. For now, those interested in ballroom dancing at home or practice for a post-pandemic future on the dance floor can order his CDs here. Selections of live appearances of the Steve Cooper Orchestra can also be found on YouTube.