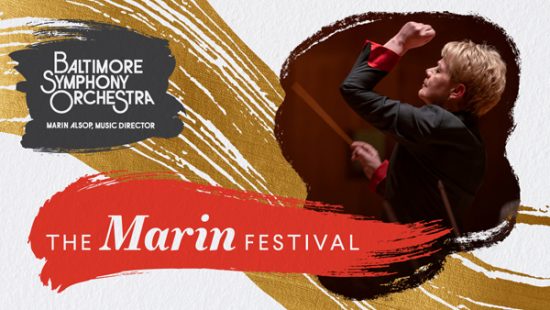 Through BSO Encore Powered by PNC, audience members can look back at Alsop’s remarkable work with the BSO and tune in as signature programs are reinvigorated every Sunday from 1 – 3 pm on WBJC 91.5 FM. Broadcasts will feature interviews with Alsop and BSO musicians about their most-treasured moments over the past 14 years.

“With genius, humanity, and vision, Marin has led both on and off the podium, raising the standard for how the BSO uses the power of music to change lives,” said Peter Kjome, BSO President and CEO. “She has instilled values that will continue to shape how we carry out our mission – through her transition to Music Director Laureate and OrchKids Founder next season and long into the future. We invite our community to join us as we salute her online and in-person.”

The Marin Festival opens on May 27 with a special OrchKids concert entitled Daring Innovation in Alsop’s honor. The Festival also features Alsop leading the finale episodes of BSO Sessions Season 1 and the Orchestra’s first in-person performances since March 2020 with two free outdoor concerts around the BSO’s two homes, the Meyerhoff Symphony Hall and the Music Center at Strathmore (details subject to local public health guidelines).

A one-night-only, live-streamed Gala event, emceed by BSO Artistic Partner Wordsmith, closes the Festival on Saturday, June 19, 2021, at 8:30 pm. Alsop will lead the Orchestra in her final concert as Music Director opening with the world premiere of a new BSO commission by Baltimore’s own James Lee III in honor of Juneteenth, featuring narration by Wordsmith. In a combination of live and pre-recorded moments, OrchKids will join Alsop in Florence Price’s Adoration, and the evening culminates with a performance by celebrated soprano Renée Fleming. Plans are underway to ensure widespread community participation through broadcast partners and free viewing hubs.

“Since my BSO debut in 2017, it has been a blessing to work side by side with Marin both on stage and in the community – she has always shown trust and faith in me and my work, and we’ve been able to challenge each other as musicians and advocates,” said BSO Artistic Partner Wordsmith. “Marin is a true champion of community and inclusion, and it is only fitting that our final performance together with her as Music Director be a collaboration with James Lee III in honor of Juneteenth.”

While the Meyerhoff Symphony Hall will fill with music on June 19, the community can show their virtual applause for Alsop via Salute from Your Seat, an opportunity to help fill the hall’s 2,443 seats with fan cutouts. Join in sharing well wishes for Marin’s new tenure as Music Director Laureate and OrchKids Founder through a virtual guest book and on social media with the hashtag #MarinMilestones.

For full details of the BSO’s celebration of Marin Alsop visit here.

About the Baltimore Symphony Orchestra
For over a century, the Baltimore Symphony Orchestra (BSO) has been recognized as one of America’s leading orchestras and one of Maryland’s most significant cultural institutions. Under the direction of Music Director Marin Alsop, the orchestra is internationally renowned and locally admired for its innovation, performances, recordings, and educational outreach initiatives.

OrchKids is the Baltimore Symphony Orchestra’s year-round, during and after-school music program designed to create social change and nurture promising futures for youth in Baltimore City neighborhoods. Founded in 2008 with 30 students at one elementary school with seed funding from Marin Alsop and Founding Donors Rheda Becker and Robert E. Meyerhoff, OrchKids now partners with ten public schools in Baltimore City, serving over 2,000 children from pre-K through 12th grade. More information about Orchids can be found at OrchKids.org.

The Baltimore Symphony Orchestra performs annually for more than 275,000 people throughout the State of Maryland. Since 1982, the BSO has performed at the Joseph Meyerhoff Symphony Hall in Baltimore, and since 2005, with the opening of The Music Center at Strathmore in North Bethesda, MD, the BSO became the nation’s first orchestra performing its full season of classical and pops concerts in two metropolitan areas. More recently, 2020 marked the beginning of a new era of artistry, innovation, stability, and digital accessibility, including the launch of the virtual platform BSO OffStage and a groundbreaking docuseries BSO Sessions. More information about the BSO can be found at BSOmusic.org.