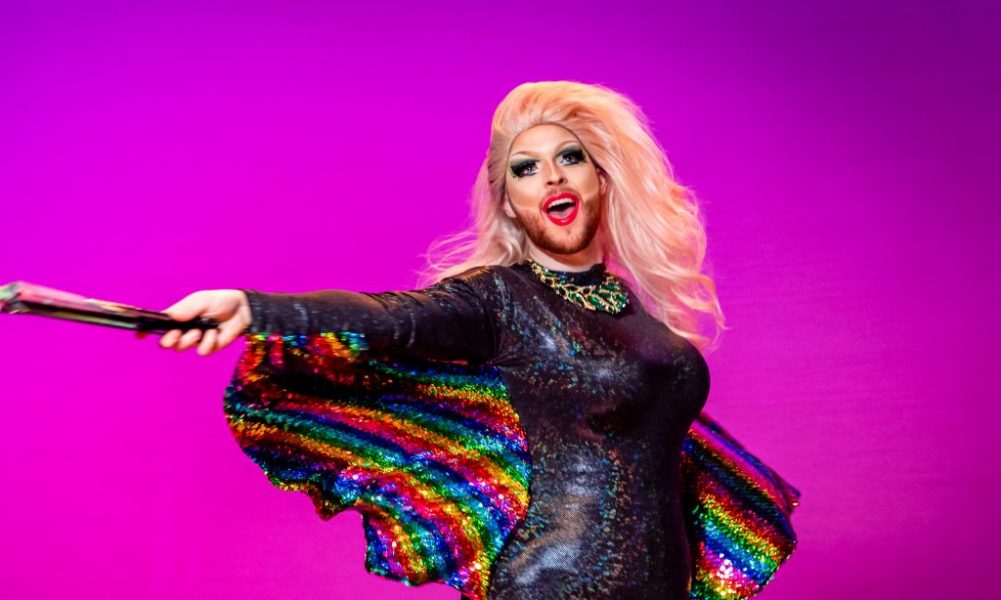 It was almost exactly a year ago that I was about to review the Gay Men’s Chorus of Washington, DC’s concert “Genderosity,” only to be faced with the beginning of the COVID pandemic, days before the show. As we know, this resulted in cancelled shows and shuttered theaters worldwide. One year later, I am absolutely delighted to be reviewing a revised, online streaming version of GMCW’s “Genderosity” — and what a production it is!

GMCW…pushed their creative boundaries by leaning in to the online, digital format to bring a truly one-of-a-kind experience.

I went in expecting a very basic filmed version of the concert. Within minutes, I was astounded by the way GMCW had pushed their creative boundaries by leaning in to the online, digital format to bring a truly one-of-a-kind experience.

Using film production techniques, dancers are superimposed on each other in novel pieces of choreography. Almost every number has multiple costume changes. (YES!) 17th Street Dance performs works in bedazzled face masks, and even outdoors. We are treated to images of the entire chorus singing the works together via Zoom, which is amazing because not a scrap of musicality or technique is lost. That is not easy to coordinate in an online-meeting format. To even get everyone on the right timing given possible internet lags, etc., what GMCW has achieved is nothing short of astounding.

The length and breadth of the road that the chorus must have walked in order to produce such a high quality, massively creative masterpiece takes my breath away. As Artistic Director Thea Kano, states in a segment with Executive Director, Justin Fyala, this new-and-improved version of “Genderosity” is the result of hundreds of additional hours of work put in after the chorus was fully prepared to perform the show live at Lincoln Theatre. The beautiful end product shows the care and attention that went into every detail.

One particularly moving piece was “The Village,” featuring Rick Bennett as soloist along with 17th Street Dance and James Ellzy as the featured dancer. The dancers actually filmed themselves via drone in a field in Pennsylvania for parts of this number. One truly unique portion of the dance was when their silhouettes appeared in sharp relief next to them, dancing along. It is a visual we never could have experienced onstage at the Lincoln Theatre.

“A Little More Mascara” was a highly entertaining number featuring soloists Todd Paul, Chuck Willett, and Ryan Williams getting into full drag as they sang, again, taking advantage of the filmed format to bring us something beyond what we could have seen live. I have to also mention ASL interpreter, Jamie Sycamore, for his artfully expressive signing throughout the entire concert, but especially impressive in this number.

Keygan Miller was a particularly emotive soloist on “When I Was A Boy,” ably accompanied by Kimberly Spath on guitar. Miller’s thoughtful variety of facial expressions lent great depth to the performance. The entire concert featured a bevy of amazing soloists, too many to list, but all outstanding. It also provided opportunities for the full chorus to shine on numbers such as “Born This Way/Vogue,” “Dancing Queen,” and “Home” from The Wiz, as well as multiple numbers from 17th Street Dance.

Additionally, we were treated to a performance by the GenOUT Youth Chorus, in tandem with the Children’s Chorus of Washington, DC, performing the a capella number “No Mirrors in My Nana’s House.” Their use of dynamics and accents gave movement and life to their high quality performance.

I strongly recommend “Genderosity,” by Gay Men’s Chorus of Washington, DC, under the direction of Dr. Thea Kano. It is a not-to-be-missed celebration of gender expression. It also is a testament to the resiliency of artists overcoming the restrictions placed on them by the pandemic, as well as an example of how to use those restrictions to create a new and uniquely masterful piece of art. I can only hope that this concert will be offered for purchase on DVD after the streaming period ends because I would love to watch it again and again!

Advisory: Parents/guardians are advised that the number “Man, I Feel Like A Woman,” features bare-chested men wearing nipple tassels.

“Genderosity” is streaming now through March 28, 2021 by the Gay Men’s Chorus of Washington, DC. A viewing link for one device is provided with a ticket purchase. For more information, click here.