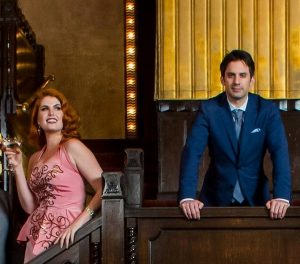 Postmodern Jukebox (PMJ), founded and led by pianist Scott Bradlee, is a unique musical aggregation. It is a collection of largely young jazz musicians and vocalists who perform contemporary songs in the styles of previous decades, ranging from swing to doo-wop and occasionally segueing into country-western. Thus, PMJ is the ultimate in genre-bending music. Fans of older musical styles can be introduced to recent hits, whereas fans of current pop gain access to older genres.

Fans of older musical styles can be introduced to recent hits, whereas fans of current pop gain access to older genres.

Mr. Bradlee explained his approach in a TedTalk given in Washington’s Foggy Bottom neighborhood: “Instead of calling a song a ‘rock song,’ a ‘hip hop song,’ or a ‘pop song,’ songs just are, and whatever you do with them is up to you. You can put songs in different genres, you can put them in lyrics with different orders…” YouTube helped make PMJ a sensation doing just that, and in recent years the ensemble has performed throughout the world and, locally, at the Strathmore Music Center. However, as with the entire arts community, the current COVID pandemic has curtailed the touring schedule of Mr. Bradlee and his coterie. PMJ is thus returning to its roots and, on March 20th, held a live streaming show on the internet, dubbed the “One-Year Reunion Tour – At Home and In Concert,” the group’s first live performance in a year. The sound mix and production quality were good, with performers visible in retro costumes. As vocalists performed outdoors, the musicians were largely hidden indoors, perhaps due to social distancing constraints. Many fans from around the world tuned in, with chat greetings from Manchester in the UK, Hannover in Germany, and San Pedro in Argentina.

The concert contained two show-stopping performances of particular note. One was Rogelio Douglas, Jr. in top form channeling Cab Calloway, complete with Calloway’s “hi-de-hi-de-ho” phrasing, but deftly performing a very different piece — “Thriller” of a more recent-era showman, Michael Jackson. The second such moment was Elton John’s “Bennie and the Jets,” taken on by vocalist Aubrey Logan. She scatted and then unexpectedly brought out her trombone for an impressive solo. (Here, incidentally, was an instance among many in which these versions are different from the YouTube videos. The original “Bennie” video was shot in black and white with the chanteuse dressed like a Vegas performer, whereas here was color in the setting and her dress.)

In an engaging moment, the soloists of the band were introduced in the theme of TV’s “Curb Your Enthusiasm.” Aubrey Logan later returned for a moving vocal version of that “tale as old as time,” the eponymous song from Disney’s “Beauty and the Beast,” taking up her solo trombone again to conclude the piece with an unexpected but compellingly soulful sound. She then ended the song in an unexpected operatic style. The performances are also retro in terms of stylistics, as when singer Ariana Savalas, dressed in a luxuriant black robe and vintage hat, sang seductively “I Like the Way You Work,” with sounds more in the style of Gershwin’s “Summertime” than the Blackstreet original cover.

Sunny Holiday displayed sensitive vocal work in “I Only Have Eyes for You,” a classic standard covered by artists as diverse as Al Jolson and Art Garfunkel. Here the singing was  backed by an understated Mr. Bradlee on piano. The Bradlee piano style could also be heard to evocative effect accompanying Aubrey Logan’s magnificent “Bad Blood,” based on a hit by Taylor Swift.

Another unexpected treat was a female singing trio who swung admirably on Meghan Trainor’s “All About the Bass,” which featured jazz bass lines. PMJ has actually created several renditions of this song — indeed, it is one of their signature pieces. This time around, there was sampling of older staples of pop, namely the Chordette’s “Mr. Sandman” and “New York, New York,” the latter associated both with Frank Sinatra and Liza Minelli. Yet not just swing but also doo-wop was utilized, with “the ladies of the PMJ” performing Portugal the Man’s “Feel It Still” in the style of the Marvelettes’ “Please, Mr. Postman.”

With the one-hour show of the “One-Year Reunion Tour,” Postmodern Jukebox has once again successfully bridged generational divides in music, making it possible for multiple age groups to enjoy both swing and contemporary pop songs, leading us to hope that the show might one day be released in a recorded format. While the Pandemic World Tour was a one-weekend-only event, many of PMJ’s recordings may be enjoyed on YouTube or through ordering Mr. Bradlee’s CDs – or on the ultimate in postmodern, the long-play vinyl record! Further, the talented Mr. Bradlee has recently produced an album, “Standards and Melodies,” in which he plays standards and melodies on solo piano, including a warm recording of “Till There Was You” from “The Music Man,” and a lyrical version of “Moon River” from “Breakfast at Tiffany’s.” Both the PMJ and solo piano productions are highly recommended. Scott Bradlee has also recently released “Postmodern Jukebox at the Piano,” with acoustic piano versions of PMJ’s biggest hits. Go to the PMJ website for more information and upcoming concert dates.