Veronneau is so assured and so adept, you sink into their spell.

Dredging up my high school French is in homage to the final show of the 10th Passport to the World cabaret series  produced by Creative Cauldon. Last night was the 10th anniversary of the Latin/jazz/samba group, Veronneau, and  their debut album, “Joie de Vivre.” This Wammie award-winning group has also been responsible for curating the acts for the Passport series.

The intimate concert, filmed on the Creative Cauldron stage, was anchored as usual by French Canadian vocalist, Lynn Veronneau. It included Ken Avis on guitar and vocals with Dave Kline on violin and mando violin. The trio are superbly in synch with each other, and obviously took delight in making music together. 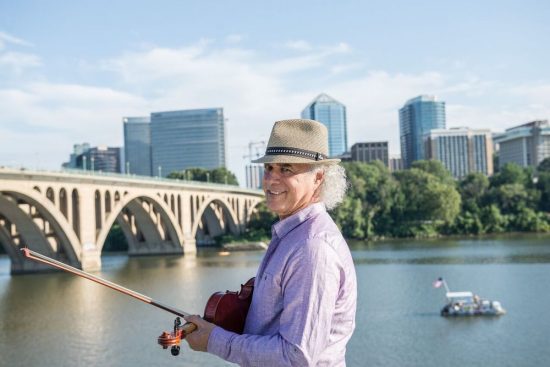 The three songs in French were the standouts. The well-known “La Mer,” the second song of the evening, set the tone for the performance — smooth, somewhat bittersweet, understated, and compelling. You are watching three musicians speaking in a language that transported the audience, for a while at least, to a small club where nights are long, golden-tinged, and everything is possible and impossible at the same time.

The concert also included a “bossification” of a Bob Marly’s “Wait in Vain,” and an intriguing mash-up arranged by Dave Kline of a Jimi Hendrix tune, “I’d Rather Go Blind” and another about a waterfall which were spun fluidly together. Others that were particularly memorable included “The Moon Is A Harsh Mistress,” “Someone to Watch Over Me” (sung by Ken Avis), and “Spring Can Really Hang You Up the Most.”

The final song, that closes every show they’ve done at Creative Cauldron, was “Brazil.” It was quietly upbeat — like walking home shortly after dawn when life is just waking up and you’ve got a whole new day in front of you. It was an excellent way to end a concert.

The evening was relaxed and understated. And by understated, I mean compelling in the way a very quiet voice in the room can have everybody leaning forward hungrily to hear. Veronneau is so assured and so adept you sink into their spell, and what a lovely spell it was.

Running Time: Approximately one hour and 10 minutes without intermission .