The Newtowne Players Announces 18th Season – A ‘Season of Joy’ 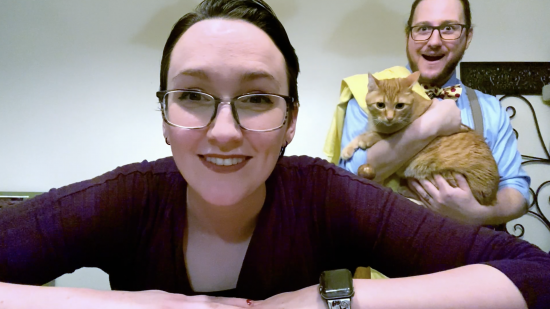 Executive Producer of The Newtowne Players, Meg Pugh, is assisted by her husband, Steve, and their cat “Ham” to announce one of the shows in the Season 18 lineup during a virtual preview announcement on March 13.

Since the group was notable to gather in person to celebrate the season announcement, The Newtowne Players announced its 18th Season via a virtual preview party on March 13. The season features previously announced shows “A Night on Broadway”, “Puffs,” “Elf, the Musical,” and “Something Rotten” from the 17th season. In addition, The Newtowne Players added “Noises Off” and “A Midsummer Night’s Dream”.

“We all hoped that we could finally return to the theatre this spring, but our priority has to be the safety of our volunteers and audiences,” Pugh said. “As you can imagine, our production team has had a difficult job keeping up with the changing environment, making tough decisions and trying to plan for an uncertain future. We are starting to see a light at the end of the tunnel and have begun making plans to return to the stage for Season 18.”

The 18th season at Three Notch Theatre begins with a crowd favorite “A Night on Broadway” running September 10-September 26, 2021. Director Erich Engeland Music Director Sarah Gravelle return from Season 16’s cancelled production to reimagine the show for the new season. With all new music from acclaimed Broadway blockbusters as well as recently released showstoppers, this performance is sure to be a crowd pleaser and a great way to kick off the season.

“Elf the Musical” with a book by Thomas Meehan and Bob Martin, music by Matthew Sklar and Lyrics by Chad Beguelin was cancelled from Season 17 and makes an unexpected return in Season 18, November 12- December 12, 2021. The rights to perform this show were scheduled to be put into the vault by licensing company, Music Theatre International, at the end of 2020. Due to the pandemic they have extended the show’s availability and The Newtowne Players were able to secure the right to perform it again. Director Timothy Joyce has a knack for holiday productions, having previously directed “Twas the Night Before Christmas” in2017. This jubilant and hilarious holiday musical welcomes theatergoers of all ages into a holiday spectacular that’sbrimming with the spirit of the season.

The third production in the lineup, “Puffs” by Matt Cox, is another return from the previous season this time directed by Tessa Silvestro and running February 11- 27, 2022. For fans of a certain school of magic,this show is a comedic staging of those beloved novels about a boy wizard who went to a certain Wizard school and conquered evil … from the perspective of the “Puffs”… who just happened to be there too.

The first of two new additions to Season 18 comes with “Noises Off” by Michael Frayn, directed by Randy Tusing and runs April 22 – May 8, 2022. If you’ve ever wondered what happens backstage during a performance, “Noises Off” will put a smile on your face and have you laughing until your sides ache. This unique show pulls back the curtain, revolves the stage and gives audiences a peek into backstage antics like no other show before.

The final performance at Three Notch Theatre for the 18th season is fresh from Broadway. We’re delighted to announce that “Something Rotten!” A musical with music and lyrics by Karey Kirkpatrick and Wayne Kirkpatrick and book by Karey Kirkpatrick and John O’Farrell directed by Megan Rankin-Herring and Stacy Reynolds Oosterink will run July 1- 24, 2022. “Somethng Rotten!” Made its first appearance on Broadway in 2015 and was released at the beginning of 2020 to the theatre circuit just as the doors to theatre across America closed. NTP is delighted to be premiering this hilarious musical comedy to audiences in Southern Maryland in the summer of 2022.

The season wouldn’t be complete without a little Shakespeare in the City. For the 10th anniversary of this magical partnership with Historic St Mary’s City, The Newtowne Players brings to life “A Midsummer Night’s Dream” in mid August 2022. Veteran director Beth Sanford (“Much Ado about Nothing”, “As You Like It”, “Twelfth Night”, and “Romeo and Juliet”) leads the charge into the forest inhabited by fairies as Artistic Director, Jenny Meisinger, adapts one of Shakespeare’s most popular plays for our outdoor stage. As always this performance will be staged in Historic St. Mary’s City.

“Our Season 18 schedule was curated to be a ‘Season of Joy’,” Pugh said. “We’ve spent enough dark days away from our stage in the last year, we wanted to just have a lot of fun this season, put smiles on peoples faces, act a little crazy and fill the building with laughter and hope. Each show in this season was specifically selected for that very reason.

“We know that things might be a little different for the upcoming season, but we are committed to our mission of bringing live community theatre into the heart of Southern Maryland. We are working with health officials to ensure that Three Notch Theatre is safe for all patrons, performers and volunteers when we re-open our doors again this fall.”

The Newtowne Players also announced a change in ticket pricing. For the first time in more than ten years the prices of regular plays (non-musical productions) increased. There will be no change to musical pricing. Adult tickets cost $18, Discount Groups are$15 and children 12 and under are$13 for all performances. On Thursday’s all tickets cost $13 regardless of age. Discount groups include seniors 65 and over, students and military with ID. At this time civil service and contractors are not included in discount pricing. newtowneplayers.org