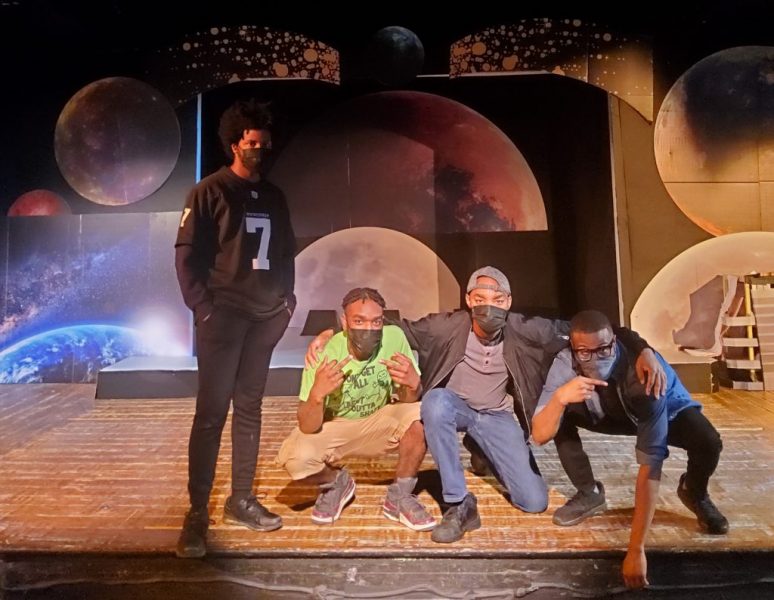 On February 17th, Baltimore Mayor Brandon M. Scott announced updates to the City’s phase 1 COVID restrictions. These included the return of live indoor entertainment at 25% capacity, with masks and physical distancing. The news led several organizations (The Hippodrome and Rapid Lemon Productions among them) to announce reopening plans, and created a unique opportunity for Arena Players to showcase its latest film project.

…four gifted and powerful actors who seem to fit each other on a molecular level.

“Kill Move Paradise,” by Philadelphia playwright James Ijames, won the 2017 Whiting Award and a 2019 Kesselring Prize. It’s a tightly-wound, energetic piece for a small ensemble, and a perfect vehicle to film and stream during Arena’s “ghostlight” period. With the loosening of Baltimore’s restrictions and a favorable negotiation for a single weekend’s live performance rights, the piece has been adapted as a stage production, available through March 14th.

Director Marc Stevens shows tremendous chops, guiding blocking adjustments and other tweaks to re-calibrate the play for the Playhouse’s thrust stage. The task was doubtless made considerably easier by a group of four gifted and powerful actors who seem to fit each other on a molecular level. Ijames’ script, too, is a fertile playground. In it, we meet Isa (Isaiah Evans), Griff (Antoine Williams), Daz (Terrell Chambers), and Tiny (Broadus Nesbitt III) in an outworldly-looking space realm. They appear there, one by one, amid seismic and metaphysical disturbances whose meanings are unclear at first. Eventually, and with a nod to Sartre’s “No Exit,”the characters discover their shared place in the universe. It’s an awful lot to process.

“Being a Black man just ain’t what it used to be,” sings Isa near the top of the show, alone on a stage that’s completely empty save for a cosmic dot matrix printer. Evans holds his ground firmly and with quiet intensity, establishing a recurring motif of directly addressing the audience (the “watchers”) and providing us with a role to play. Griff soon enters, with Williams delivering a highly confident immediacy. Right away, an engaging solo piece morphs into a deft two-hander — just in time for Chambers’ appearance as Daz. Chambers provides a brilliant counterpunch cadence (and his own furniture), riffing in near-verse against his cast-mates’ more conversational style. Together the three men begin unraveling the mysteries of their situation, with help from a paper airplane welcome letter. It’s a while before we see Tiny, a child who’s armed with a colorful toy pistol — ready to fight aliens and anyone who teases him about his size. Nesbitt is an adult actor playing Tiny, and he thankfully avoids leaning too hard into childlike characterizations. A product of his environment, Nesbitt’s Tiny has had his innocence stripped away.

Both the verbal and the visual styles of this production are aggressively percussive and dissonant, at times whirling towards the limits of actor and audience, yet maintaining full connection to their supporting structure. There are balletic moments — movement sequences expertly choreographed by Evans — and often a fugue frenzy that puts one in the mind of an old Sonny Rollins record. Isa leads a gripping “say their names” litany. Griff reminds us that “You aren’t a bird. You can’t catch the air. You can’t save yourself. You’ve got to learn how to walk.”

“Kill Move Paradise” the film is currently in editing, and will be made available for streaming sometime in April. We’ll review it here. Meanwhile, there are only two remaining opportunities to see the powerful stage production this weekend.

For COVID safety, Arena Players has limited attendance to 25% of capacity, or roughly 75 seats. Audiences are offered distanced pod-style seating in distanced groups of 1, 2, and 4. Masks are required at all times. The theater and lobby are clean, and feel quite safe.