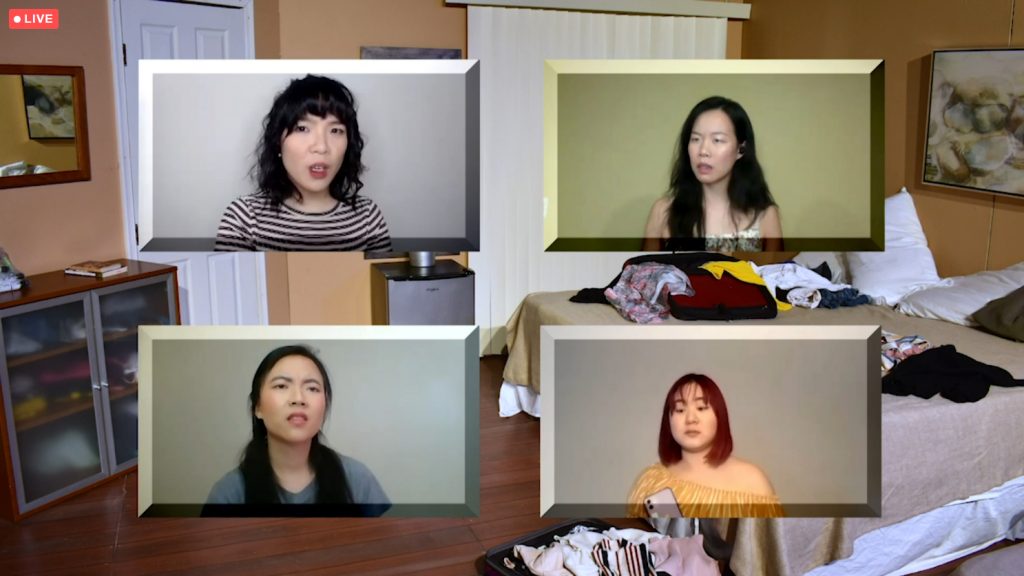 A Korean Christian girls’ youth group from L.A. is in Bangkok with its pastor. The teen missionaries are excited over the prospects of saving the souls of red light district tourists — or, of a free vacation, depending on whom you ask. But there’s a problem: the horrifying discovery of an abusive, criminal violation. So begins “Man of God,” a play by Anna Moench, streaming online by Strand Theater. Director Elizabeth Ung crafts a presentation that’s 90% live Zoom and 10% pre-shot footage, and the net result is a terrific adaptation of Moench’s pre-pandemic script.

…the stakes are high and emotions are kaleidoscopic…crackling direction by Ung and powerful performances by the cast.

The playwright wastes no time, diving headlong into the story’s central conflict on page one. Character development is solidly framed in the context of how the four cope with this new information. Samantha, Jen, Kyung-Hwa, and Mimi immediately establish themselves as disparate teenage archetypes. The naive Samantha denies it at first, but later, is the first to decide on a revenge plan. Jen, the brainiac, is less focused on personal injury than on the ramifications of the exposure on future plans for medical and/or law school. Kyung-Hwa is a “boys will be boys” apologist who wishes that everyone would just chill out a bit. Mimi, the rebel, has a long fuse too, but heaven help anybody who’s within range of her when it burns out completely. Pastor Park is a MacGuffin throughout the live portions of the play, appearing only in the prerecorded scenes.

If the playwright can be accused of creating cookie-cutter characters, Strand’s production redeems Moench with crackling direction by Ung and powerful performances by the cast. In the role of Samantha, Libbey Kim occupies very firm ground as an initial denier whose acceptance fuels deep hurt, then rage. Rebecca Kiser gives Jen the kind of edge that comes from having the weight of the world on her shoulders. When Jen insults her friend with the remark “my school is harder than your school,” Kiser’s subtlety is so fierce that one isn’t sure whether the slight was intentional or not. Kyung-Hwa may be the most devout of the group, and Sydney Lo does a great job of pushing past her goody-goody nature. It’s within a dark confrontational moment when she announces that “Jesus doesn’t have a sense of humor,” with both deadly seriousness and nimble comic timing. Mimi is definitely a handful, and Kelly Ng is full of bare-knuckled urgency in her portrayal. For all of the girls, the stakes are high and emotions are kaleidoscopic. For the pastor, there’s a very different agenda, and Steve Lee delivers convincingly.

Structurally, the Zoom majority of the play has the actors individually windowed against wallpaper scenes of their hotel room, designed by Gabriela Castillo. The use of green-screen is avoided here, and the result is straightforward and effective. That hotel backdrop is also the sound-stage used in several video cutaways, produced by Adam Savage, with lighting by Amy Rhodes. These account for a small percentage of the play’s duration, but a huge portion of the play’s energy. Fight/Intimacy Choreographer, Sierra Young, created imaginative and compelling battle sequences for most of them, though the peak of violence in the play may very well occur in a long, wordless sequence in which not a single punch is thrown. Throughout the production, C. Swan-Streepy’s sound design is apt, providing just the right menacing undercurrents at just the right times, and with a formidable restraint when needed.

Sexual violence against women has been an issue for centuries, one which also has an obvious, rightful place of reckoning in the performing arts. Its visibility has grown exponentially during the past half-decade. Most recently, America has also seen the rate of anti-Asian hate crime skyrocket. Since the early days of the COVID-19 pandemic, the group Stop AAPI Hate has recorded nearly 4,000 reported incidents of hate against Asian American and Pacific Islanders. Just ten days before the opening of this production, eight people were shot and killed — six of whom were Asian women — by a white man who claimed sexual motives and denied racial ones. All this occurred during Women’s History Month. “Man of God” is a well-told story that’s desperately needed, and needed now.

“Man of God” streams online through April 11, 2021. Tickets are $20 per device, with a portion of proceeds benefiting Stop AAPI Hate. To purchase, or for more information, visit Strand Theater Company’s website.