Theatre Review: ‘She Kills Monsters’ at Arts Barn in partnership with Montgomery Playhouse 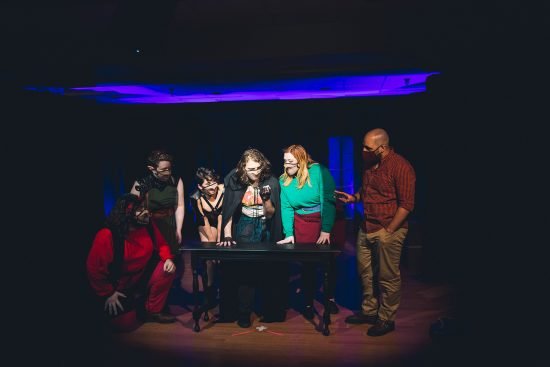 Live theatre is finally making its much anticipated return, though still cautiously and virtually in most cases. Personally, it’s been far too long of a hiatus, a sentiment that I am sure is shared by many theater lovers. There is a hopeful light at the end of the arduous tunnel that has been this past year. This past Friday night, I was able to spend an evening basking in the glory of live theater, streaming from the Art Barn where Montgomery Playhouse is presenting its female-centric production of “She Kills Monsters” to honor the 100th anniversary of the 19th Amendment.

It made me feel at ease, as if I were in good company…A fun, easy-going production like this is exactly what we need in these still uncertain times.

The basic premise of this show centers around a woman named Agnes Evans who has just recently lost her teenage sister, Tilly, to a car accident. As a way of coping with the recent loss, she chooses to delve into the vast role-playing world of “Dungeons & Dragons” to better understand her sister’s hobby. Along the way, she meets some incredibly interesting, and some unsettling, characters that help her connect with Tilly.

This show was a fun-filled romp from start to finish. Everything, from the snarky narrator at the beginning of the show to the silly monster fighting montage and the song choices, were spectacular. This show reminded me of a Starkid production (please tell me I’m not the only one who remembers “A Very Potter Musical”) in the way it  utilized absolute whimsy through its use of comedic puppetry, plenty of stuffed animals, and overall feeling that it wasn’t taking itself too seriously. It made me feel at ease, as if I were in good company, whilst sitting in my pajamas on a comfy couch, snuggling with my cat. A fun, easy-going production like this is exactly what we need in these still uncertain times.

The ensemble of actors in this production worked extraordinarily well together. They acted as a cohesive unit and trusted each other as artists. There were a few, inconsequential mishaps during the production and it was a breath of fresh air to see how well the actors adapted to these unexpected moments and supported each other without skipping a beat.

Kira Simmons as Tilly Evans, Rocky Nunzio as Chuck Biggs, and Spencer Pilcher as Orcus/Ronnie were particularly impressive. What they all shared in common is that I believed each of them from start to finish and wholeheartedly saw the actors as the characters they were portraying. Simmons conveyed the unapologetic pain of adolescence with unwitting clarity. She made me remember what it felt like to be seventeen again. Nunzio made me laugh with reminiscent familiarity as he completely captured the essence of a nerdy teenager who is unapologetically himself. Pilcher flawlessly embodied the character of the quirky, laid-back, and slightly older, nerdy guy that I’m certain we’ve all known at some point in our lives. He was a joy to watch in every scene he was in.

Cassandra Redding’s style of puppetry added such fancifulness to the production that it felt a bit inspired by LARP (live-action role playing). I really enjoyed Steve and the dragons in particular. Props by Laura Searles, Tom Barylski, and Elizabeth A. Weiss really made this play come to life, with the abundant use of stuffed animals and stylistic weapons. The set design was very minimal (which really suited the nature of this show), so the props trio really had an opportunity to shine. Tom Barylski’s direction was so wonderfully fun and carefree. The comedic timing of Miles chasing Chuck was laugh-out-loud phenomenal.

This show has a lot of heart in it. Do be warned that this show contains some more adult-themed content, so I wouldn’t recommend  it to anyone under the age of fifteen. For fans of “Dungeons & Dragons,” and even for those who aren’t familiar with it, I promise this production will not disappoint. It is sure to lift your spirits during what has been an impossible year for us all.

Running Time: approximately 1 hour and 50 minutes with no intermission.

Content Advisory: Recommended for ages 15+ due to sexual innuendo and strong language.

“She Kills Monsters” is currently live-streaming from The Arts Barn through March 21st. For more information and to purchase tickets, please visit the Arts Barn website here.