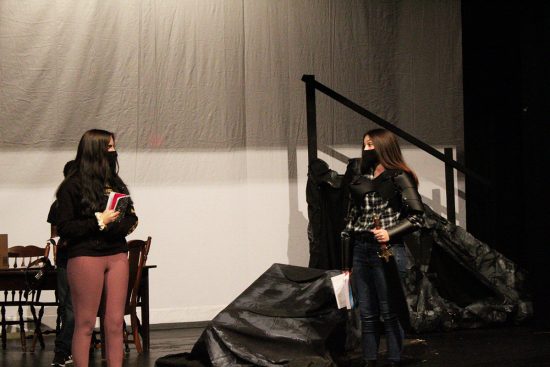 Magic powers, sibling angst, and longing for acceptance. A show centered around a game of “Dungeons & Dragons” in the 1990s proves to be an emotional and effective production by the Children’s Theatre of Annapolis titled “She Kills Monsters.” The show focuses on two sisters — Agnes, the popular cheerleader, and her little sister, Tilly, a geek and astute designer of a “Dungeons & Dragons” game before her tragic death in a car accident. Aptly staged and lit for a show for Covid time, with face-masks and social-distancing between all characters even during the staged fighting scenes, the show turns out to be a complex, emotional, coming-of-age story.

The lead character Agnes, played by Raelyn Brummit, a popular cheerleader in the senior class, is mourning the death of her sister. She finds a notebook of a “Dungeon & Dragons” tale, authored by Tilly, which leads Agnes through an adventure filled with characters and villains inspired by Tilly’s own life.

Director Sim Rivers says it is a play about unexpected loss. “It’s about people being separated and finding new ways to connect and learn about each other,” he said. “Most of all, it’s about accepting what you can’t change, and finding healing, joy, and adventure in what’s around you.”

All teens involved in the production gave heartfelt performances, including Avery Cain as Tilly and her longing to have the social status, or at least the acceptance, of her sister. Anna Lackey plays Chuck, the D&D leader who guides Agnes through the process of the game. Isabel Carvajal is Lily, Tilly’s close friend who only wanted to be understood and proved the hero to Tilly in her game.

The set design was clever, with reality (including the interaction with Agnes’ boyfriend and her friend working at the Gap) on one side and the background of the D&D game on the other. In the middle was table belonging to Chuck, Agnes’ D&D interpreter and Tilly’s friend. The use of lighting and figures that appear on the overhead screen allowed the audience to view just what the Tilly team was up against as they fought evil and familiar-looking characters.

The production contains language and mature themes which might be uncomfortable for some. But the themes throughout the show — acceptance, friendship, dealing with bullying, and family — are what Children’s Theatre of Annapolis is all about.

In a time where we have been disconnected for over a year, this show centers around connectivity among family and friends and the value of appreciating those who are different.

Running time: One hour and 20 minutes with no intermission.

Advisory: This production is recommended for ages 12 and older due to language and mature topics.

“She Kills Monsters” was presented by Children’s Theater of Annapolis live on March 6 and 7, 2021 and streams online March 13 and 14, 2021 at 7 p.m. For more information on CTA’s upcoming shows and classes, click here.