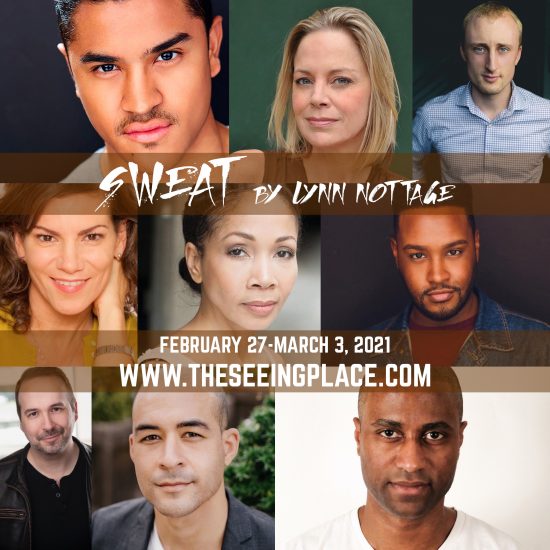 Times have been tough on all of us all throughout this last year of the pandemic. While adversity can sometimes bring out the best in people, it can also reveal the true filth beneath. In the year 2000, the same was true for factory workers. They went from living in a time when working in a factory meant an honest job that paid a living wage to suddenly being shorted out of their livelihood because technology and overseas outsourcing had suddenly made their jobs obsolete. The Seeing Place Theater in New York City recently presented Lynn Nottage’s 2017 Pulitzer Prize-winning “Sweat” that delves into this very disheartening time in our nation’s history. The show’s proceeds went to benefit The Fortune Society, an organization that helps formerly incarcerated people to reenter the community.

While these exchanges made me physically uncomfortable as an audience member, I am a firm believer that sometimes we need to be uncomfortable during art in order to learn from it. This show calls for the audience to reevaluate the way that we view people that have different circumstances than our own.

This show focuses on nine different people who either have worked in the factory or work at the local bar where everyone goes to decompress after work. There are some scenes that take place in 2000 before and during the catastrophic changes at the factory and the rest of the scenes take place in 2008 after two of the characters have finished their incarcerations. Throughout the play, there are definitely a lot of uncomfortable exchanges between characters that reveal the hideous truth of racism, sexism, and classism in our culture. While these exchanges made me physically uncomfortable as an audience member, I am a firm believer that sometimes we need to be uncomfortable during art in order to learn from it. This show calls for the audience to reevaluate the way that we view people that have different circumstances than our own.

All nine of the actors in this play work together remarkably well (especially given that this is done in a virtual conference call format). Green screens are used behind each actor to help portray where the setting is in a particular scene and background environmental noise is added to help create a theatrical ambience. I appreciated this directorial choice made by Brandon Walker because it made the scenes feel a bit more real even though the actors were not physically in the same place during the performance.

Justin Phillips as Chris, Joy Sudduth as Cynthia, and Eileen Weisinger as Jessie were three actors that particularly stood out to me with their heartfelt performances. Phillips portrays a man that is still haunted every day by his incarceration in an absolutely heartbreaking performance that left me rattled with its authenticity. Sudduth plays a woman that has had to scrape by in life for everything that she has. When she is finally given a chance in life to move up at her job, it ends up being thrown back at her with horrible repercussions. I appreciated the internal conflict that the actress was able to convey. Finally, Weisinger portrays a woman that struggles with substance abuse with absolute clarity.

This production had two live performances via Zoom on February 27 and February 28 and was then available via streaming on YouTube February 28-March 3, 2021. I truly admire what benefit productions like this one seek to accomplish. It’s so effortless nowadays to become myopic about our own lives and forget how other people live. We choose which news sources to listen to, who to allow on our social media feeds, and so on. I believe that if more people watched eye opening shows like this, maybe we could live in a more respectful world where differences make us beautiful, not wrong.