Theatre Review: The British Players presents ‘Let’s All Go to the Music Hall’ 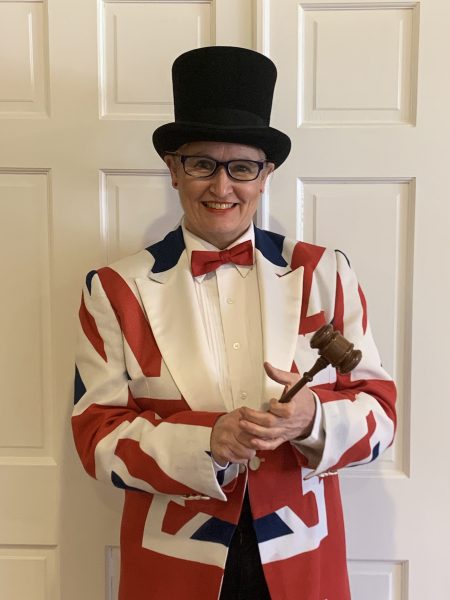 One of the benefits of online reviews is that you can go back to YouTube streaming and catch what you missed. This was the case last Saturday night when a late Seder dinner kept me from tuning into the opening numbers of “The British Players Present: Let’s All Go To The Music Hall,” the online production now available for viewing with a suggested donation. But don’t dilly-dally — catch the entertaining Brits back at the Music Hall!

Don’t dilly-dally — catch the entertaining Brits back at the Music Hall!

Nearly 60 years ago, The original British Embassy Players — there was some connection to the British Embassy — first presented the Music Hall shows. It was a chance to showcase turn-of-the-20th century British culture, especially its unique humor, Victorian costumes, and toe-tapping tunes, some a bit bawdy. Today folks look forward to these annual spring shows that promise a “Cheeky Chappie,” a “Red Hot Mama,” an acrobat, and a full complement of singers and entertainers with new versions of audience favorites.
As moderator Nicola Willis-Jones declares in her opening, “We have an array of artists for your amazement and amusement.” Called “The Chairman” in this virtual production, Willis-Jones wears a tuxedo designed from the Union-Jack flag, a classic top hat, and a snazzy red bow tie.  She is delightful as the host who manages those tumbling tongue twisters plus some jokes, both playing to the unseen crowd.
“What do you get when you cross the Atlantic with the Titanic? About Half Way!” Laughter abounds.
Our Chairman introduces the acts that were videotaped from their homes, studios, theater spaces and other places, rather than the usual site for the Music Hall shows at the Kensington Town Hall. Her “fan favorite” Malcolm Edwards performs “Side by Side” in his bathrobe from his bedroom. The “fanciful bevy of beauty” describes acrobat Abigail Kruger, who accomplishes tricks on a trunk you might find backstage at a theater, accompanied by Erin Cassidy and Kristin Franco who are cleverly placed on both sides of the dancer in an undisclosed location.
Nicola Hoag (also credited with costume design) co-directed with Missi Tessier. A nod to technical direction by Matthew Mills and the wizards who helped put the show together. I enjoyed the creative costumes, especially hats, that were featured in the Zoom-like screen shots. While there are a few glitches in sound, though it might have been my WiFi, it’s still a treat to be reminded of the old time vaudeville shows on television where many stars, especially comedians, got their start. Think Ed Sullivan, Carol Burnett, and my personal favorite, Ed Hurst from the Steel Pier in Atlantic City.
Noteworthy among the 26-member cast were the Richmond Revelry with a rousing renditions of barbershop favorites. Albert Coia is cheeky and charming in his pink jacket and straw bowler. Bethany Blakey earns her “Red Hot Mama” handle with sultry singing and a sexy scene. There were poignant moments, too. Eileen Kent pays tribute to the late Joan Roseboom, remembered as a “treasure” to the troupe. Just back from the Queen’s Guard, NeilMcElroy wins the prize for most authentic costume., and Joe Lilek from his Canadian location sings “A Proper Cup of Coffee” with sass and panache.
Our host returns to dampen the candle and to announce the closing of the show with a medley of songs, British of course. It is suggested to pour a pint and imagine it has been brought to you by a lovely, saucy barmaid, as was done in live Music Hall shows.
Time:  One hour and 30 minutes without an intermission, unless you put it on pause.
Go to the link here. “Let’s All Go to the Music Hall” was live-streamed by The British Players on March 27, 2021 and still can be viewed on YouTube.