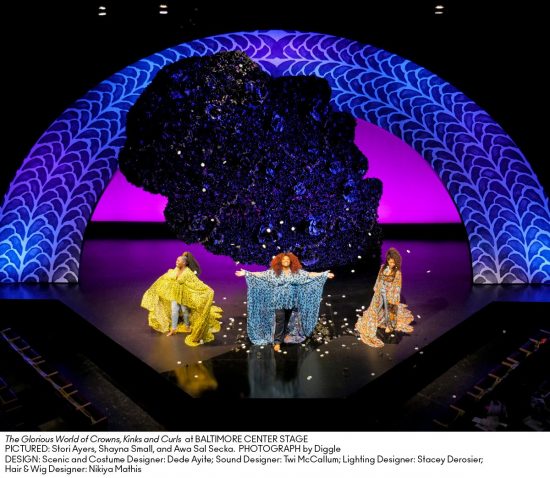 Three years before Solange debuted “Don’t Touch My Hair,” Keli Goff’s idea for “The Glorious World of Crowns, Kinks and Curls” was born. Kelli Goff, a multi-platform storyteller, nominated twice for News & Documentary Emmy Awards and a NAACP Image Award recipient in 2006, tells her story in the program. “Though I didn’t realize it at the time, the panic/borderline meltdown that engulfed me as I struggled to figure out what I was going to do with my hair for the most important meeting of my career was the genesis of this play,” she writes. “And I know I am not the only Black woman who has a similar story.”

…a beautiful, empowering play, celebrating the perseverance, creativity, and sisterhood…

“The Glorious World of Crowns, Kinks and Curls” cycles between monologues and short scenes that highlight the range of emotions, experiences, and internal dialogues Black girls and women live through each time someone else comments on, touches, or does their hair. From Thanksgiving break to the workplace, from a wedding to a funeral, from the courtroom to the classroom, each scene explores the legacy of Black women’s perseverance and pride despite the many strands of oppression cast upon them and their hair by society.

This is the first production of the 2021 Mainstage series at the Baltimore Center Stage. The staff went through rigorous testing and quarantine practices to ensure that “The Glorious World of Crowns, Kinks and Curls” was created safely during the ongoing global pandemic. From the moment the viewer hits play, it’s apparent how much time and energy the staff and artists put into bringing that in-house theater feeling to the comfort of one’s own home.

The virtual production not only tells the stories of Black women, but puts them first, front and center — and in the creation process, too. “Every designer is a black woman […]  My stage manager and Assistant Director are Black women as well. The videographer too! I honestly never thought I would witness it much less be a part of it,” director Bianca LaVerne Jones notes in the program. “The Glorious World of Crowns, Kinks and Curls” is truly a celebration and testament to talented Black women all around the country.

The play has so much beauty and flow, not only in the scenes themselves, but in between stories as well. For example, in the second scene, three women are sharing their personal stories about white people touching their hair without their permission. From left to right, actresses Stori Ayers, Shayna Small, and Awa Sal Secka, playing a receptionist, college student, and young woman on a first date respectively, describe the moments leading up to and following “the hand.” The way they take turns, but then come together to emphasize the same line (“don’t ever touch my hair without my permission”), is so powerful.

There is much to be said about each and every nuance in nearly 15 scenes. It’s quite challenging to sum up the variety of women Stori Ayers, Shayna Small, and Awa Sal Secka embody with such grace and perfection. The scene where Claire is praying to God does stand out a bit though. Maybe it’s simply a matter of her returning to the stage a second time to close out the show. The camera focuses solely on her hands as she prays, with miniature props magically appearing and disappearing as she references them: a dog collar for the dog she’s asking for; nail polish in reference to a sleepover; a cupcake for her upcoming birthday; and so forth. It is significant that the production ends with her story. She may only be eight years old, but she’s already hyper-aware of racism and its influence on societal standards, even if she doesn’t have all of the vocabulary yet. It’s as if the viewer is left with the question: how will you teach the next generation to love and treasure their hair, whatever the style, type, or length?

Stage manager Danielle Teague-Daniels, scenic and costume designer Dede Ayite, and hair and wig designer Nikiya Mathis all helped to bring each story to life as well. The giant, ode-to-hair flower sculpture that remained on stage the entire production and the flowing tops used in one of the opening scenes represented the way hair can move. Every detail ensured that the virtual viewer remained engaged and invested. For example, there’s a scene where a young fiancée speaks about cutting her hair right before her wedding and the not-so-positive reaction she gets from her mother. As her scene ends, the camera zooms in as she picks up a rose, walks, and then carefully places it in a floral bouquet. Moments later, her mother comes on stage to pick the rose up and gives her hair story. What a brilliant way to emphasize the traditions, mindsets, and beauty passed from one generation to the next!

“The Glorious World of Crowns, Kinks and Curls” is such a beautiful, empowering play, celebrating the perseverance, creativity, and sisterhood behind the sacred act of doing one’s hair.

“The Glorious World of Crowns, Kinks and Curls” has been EXTENDED to May 2, 2021. Tickets are available here or by calling 410-332-0033. Prices are $15 for seniors and students, $25 for an individual, and $40 for a household. An Internet connection is needed to watch the show.