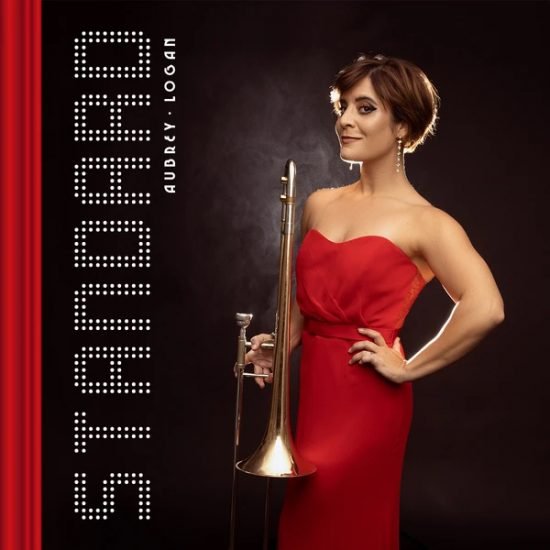 Multi-talented jazz vocalist and trombonist, Aubrey Logan, recently performed a fabulous, live-streaming concert, “The Standard Tour: Dreams,” from Austin, Texas, her adopted hometown. It is the first of several events celebrating the release of her new album, “Standard,” on May 21, 2021. This concert is a program of standards, but still a surprising choice of tunes for this artist with a gift for jazz performance. Her selections are not those of George Gershwin, Cole Porter, and Richard Rodgers, as one might expect, but rather tilt towards the popular hits of the 1970s.

…’Fascinating Rhythm,’ a standout performance of the Gershwin classic in which the multi-talented performer has a fast-paced vocal…with lively trombone performance and scat singing.

The chanteuse delivers wonderful performances of two Carpenters favorites. In “Rainy Days and Mondays,” Aubrey had a rare solo on drums, perhaps an emulation of Karen Carpenter who played drums on many of the group’s recordings. Another Carpenters’ song performed in Logan’s signature style is “Superstar,” in which she gives the song both lyrical vocal, as well as trombone, treatments, segueing into the 1980s Wham! hit, “Careless Whisper.” The title song of the concert returns to the 1970s with Fleetwood Mac’s “Dreams,” in which she performs a trombone solo arrangement reminiscent of Chuck Mangione’s “Children of Sanchez,” another 1970s pop song with jazz flavor and roots. We should also mention the back-up band of piano, drums, and bass — excellent musicians all, and capably showing an affection for funk in several selections.

Logan fans might be surprised to know the vocalist once dreamed of being an opera singer. Yet she was drawn to the improvisation of the jazz idiom. Her continued interest in opera is well-shown in her highly spirited performance of the “Habanera,” or “L’amour est un oiseau rebelle,” from Bizet’s “Carmen.” Sung in French, with Latin rhythms and accented with trombone riffs, it ends in a sustained and operatic, high-note finish. Soprano Logan also exposes jazz and pop fans to opera in her more traditional version of the baritone aria, “Largo al factotum,” from Rossini’s “The Barber of Seville.”

Some of the songs performed are original compositions. Interestingly, while many of the songs she covers are quite fast-paced, her own compositions are slow and soulful. These original works include “Airplane,” lamenting the lack of air travel during the pandemic, and “The Remembering Song,” in which she invites the audience to recall their own favorite songs.

While Aubrey Logan is clearly inspired by the popular music of the 1970s, lovers of more traditional jazz songs will not go away disappointed. Her performance of “On the Sunny Side of the Street”— best associated with the bandleader and trombonist, Tommy Dorsey — is outstanding. Unlike his version, she includes a trombone solo and their styles are very different. Dorsey played the trombone in a very high register, while Aubrey plays in a rather low register.

For this reviewer, the highlight of the program is “Fascinating Rhythm,” a standout performance of the Gershwin classic in which the multi-talented performer has a fast-paced vocal and “makes it snappy,” to quote the song, with lively trombone performance and scat singing. The show ends with an unexpected and rousing performance of “Amazing Grace.”

“The Standard Tour: Dreams” by Aubrey Logan is highly recommended for lovers of both jazz and pop music. This show will be available to stream until May 24th. This talented vocalist and trombonist is scheduled to delight fans with a live-stream from the Parker Jazz Club in Austin on April 22 (in-person is sold out.) For more information on Aubrey Logan, go to her website. For more information on upcoming performances and album releases, click here.