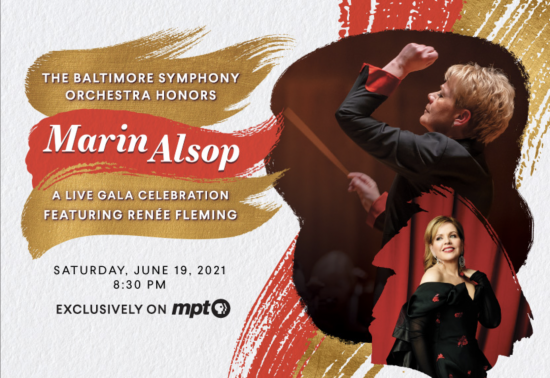 Courtesy of the BSO.

The one-night-only Gala Celebration will air live on MPT-HD from the Joseph Meyerhoff Symphony Hall on Saturday, June 19 at 8:30 pm. BSO Artistic Partner Wordsmith will emcee the 90-minute program, which includes BSO OrchKids in Price’s Adoration and the world premiere of Destined Words, a BSO commission by Baltimore composer James Lee III in honor of Juneteenth. Featuring special pre-recorded moments and surprises, the evening closes with a performance by world-renowned soprano Renée Fleming.

“Marin is a connector, and it feels only fitting to share this celebration of her achievements and legacy with as wide a community as possible,” said BSO Vice President & Chief Advancement Officer Allison Burr-Livingstone. “By partnering with MPT for this year’s Gala Celebration, and by making the entirety of The Marin Festival completely free to the public, we can do just that. Our growing list of sponsors directly enables us to bring everyone in Maryland closer to the power of music when it is needed most while ensuring the BSO meets the pace that Marin’s leadership has set for a bright future.”

The Gala Celebration is available exclusively on MPT and will be broadcast throughout the viewing area and online at mpt.org/livestream.

“MPT’s relationship with the Baltimore Symphony Orchestra goes back to the 1970s and over the years has included a young conductors competition with the BSO at Merriweather Post Pavilion, the 1982 opening concert from the Meyerhoff Symphony Hall, and the orchestra’s performance during the national public TV broadcast of the Star-Spangled Spectacular in 2014,” explained MPT President & CEO Larry D. Unger. “As the statewide public TV network, it’s only fitting that MPT is collaborating with the BSO to present this Gala Celebration concert for the benefit of viewers throughout the Maryland and Washington, D.C. area.”

The BSO is issuing a call for public community viewing hub locations, including restaurants, hotels, and outdoor venues to build opportunities for socially distanced viewing parties throughout the state. Business partners interested in joining the celebration of Marin Alsop can create themed packages, experiences, and products for sale over the festival’s duration. A Marin Festival map and marketing efforts will highlight participants of both programs leading up to the festival. To participate, visit BSOmusic.org/FestivalPartner.

The community can also join in the celebration through Salute From Your Seats, offering the chance for audience members to participate in the broadcast in the form of cardboard cutouts filling the seats of the Meyerhoff Symphony Hall. Proceeds from the sale benefit OrchKids, the BSO’s music for social change program.