Theatre Review: ‘Who Is You Hollerin’ At?’ at Arena Players 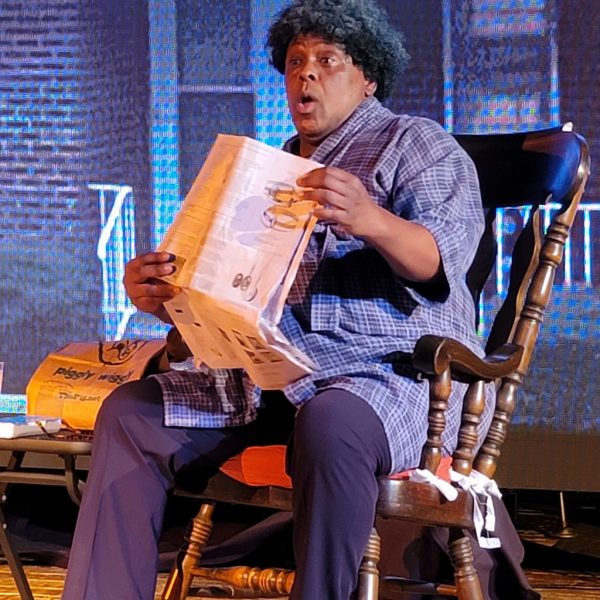 Benny Pope is a Maryland-based actor and comic. No stranger to Baltimore theater, he decided to adapt and expand part of his standup act into a one-man play, making its world premiere this weekend as part of Arena Players’ 67th season. In “Who Is You Hollerin’ At?” we meet a 74-year-old man named Sal, along with a bevy of neighbors old and new. Sal’s longtime neighborhood in a small southern city is changing. A large development is being built two blocks away, bringing with it a newfangled grocery store that features “vegtepaterian” options like “Yale Salad,” a carpetbagger couple from Iowa, and a gentrification-minded real estate speculator. Sal sees it all from his front porch, holding court there while he shoos away construction traffic, a pit bull off its leash, and other menaces.

The people and situations are instantly recognizable, rich with realism, and very, very funny.

Though Pope performs solo, Sal’s neighbors are characters here too. Through Sal’s side of shouted conversations with them we meet the neighborhood gossip, the defrocked policeman, and the friend just home from being hospitalized by his wife’s well-thrown pot of grits. Sal’s wife and their grandchildren are here too, the latter struggling with COVID-era “virtuous learning” and the spelling of their own names.

The tapestry Pope creates is largely drawn from his own experiences and extended family growing up in Aiken, South Carolina. The people and situations are instantly recognizable, rich with realism, and very, very funny. Director Donald Russell Owens does a great job of providing Pope with just-enough-not-too-much structure in which to operate. A large video backdrop of Sal’s house accompanies a rocking chair and a small table. That’s all Pope physically needs. The wide, shallow thrust of the Arena Players’ stage makes a perfect configuration from which Sal can engage with neighbors on either side, as well as visitors in the street, downstage. By virtue of this arrangement and Pope’s energy and magnetism, “Hollerin'” is anything but static.

Lighting and sound by Charles E. Harris, Jr. are mostly praiseworthy. One might question the necessity of using a body mic and heavy amplification of Pope’s voice in so small a venue, or the need for keeping house lights on during the performance, but Harris’ sound effects are well crafted and add good texture. Victoria Jackson provides lovely wig and costume work.

Running Time: 89 minutes with one intermission.

“Who Is You Hollerin’ At?” appears through April 4, 2021, at Arena Players, 801 McCulloh Street in Baltimore. Distanced pod seating is limited, and masks are mandatory for entry. Tickets are $25, available online. For more information call (410) 728-6500.