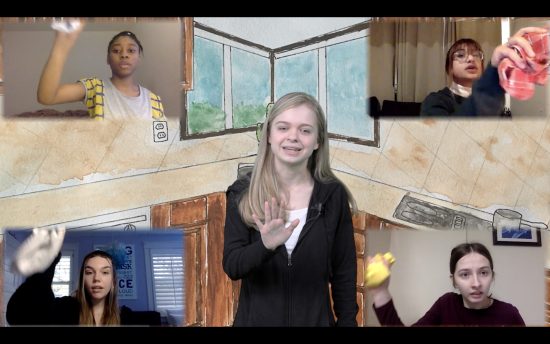 St. Andrew’s Episcopal School’s spring musical, “Working,” brought new life to the screen of digital high school theater. A virtual adaptation of the 1978/2012 Broadway production, St. Andrew’s incorporated professionalism, dynamics, and attention-grabbing energy into their performance. Working tells the story of a series of individuals who discuss the conditions and opportunities found within their jobs and careers. Based on the testimonies of real workers interviewed by Studs Terkel prior to the show’s writing, Stephen Schwarz’s musical “Working” communicates both the exaggerated nature of musical theater as well as valuable lessons drawn from real-life experiences. By looking into the worlds of the individuals portrayed by the characters in the show, “Working” serves not only as riveting entertainment, but also an exhibition of the hardships faced by the various working classes.

Beyond telling a meaningful story, St. Andrew’s “Working” was a polished production with seamless technicalities and technology. Filmed and compiled using green screen technology, “Working” was able to overcome the common boundaries of virtual theater and create dynamic interpersonal movement, direction, and dance. Mixed with the professionally skilled video editing done by a St. Andrew’s alumna (Leia Terrenzi), the artistic contributions made by Tinuke Alarapon, Valeska Peters, Christina Rowe, and Katie Skinner brought color and depth to the virtual stage. Playing behind the impressive visuals, the band (including members Kate Bailey, Julian Delogu, Aaron Lobsenz, Henry Freytag, and Kalev Murray-Rouse) moved the story along with ease and worked in tandem with the singers to make bright and engaging musical performances.

Actors like Charlotte Lobring, Adrienne Ahmad, and Kyle Boozer brought relatability to a largely fantastical scene. While dancing and singing among ensemble crowds, the lyrics of their songs stood out in a way only possible through strong emotional communication, done through both tone and expression. On top of the evident messages communicated through the testimonies, songs like “Brother Trucker” brought humorous moments that enlivened the show.

“Working” stood out amongst the sea of virtual theater. With advanced technology, acting, singing, and dancing, the production resoundingly fit into the category of successful musical theater.

The performance reviewed was presented on Saturday, May 15, 2021.