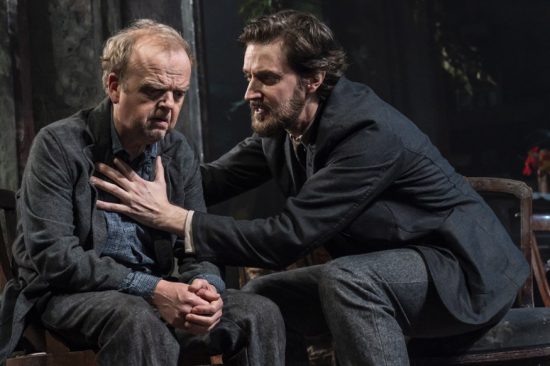 One of the silver linings of theatre closures from COVID — one of the few, mind you — was the decision to capture productions on film. When the production is as high-caliber as the Harold Pinter Theatre’s “Uncle Vanya,”featuring an adaptation of the Russian original by Irish master playwright, Conor McPherson, it’s a silver lining to be truly grateful for. Filmed on the original set, with some adaptation of Ian Rickson’s original direction for the camera, the production featured on PBS’s “Great Performances” series proved to be as satisfying a Friday evening at home as one could hope for.

Anton Chekhov’s“Uncle Vanya”— an often-hilarious rumination on wasted lives, the nobility of sacrifice, and the futility of pining away for what might have been — has a huge cult following, and not just among fans of Russian drama. Louis Malle’s 1994 film “Vanya on 42ndStreet” (with Wally Shawn in the title role) attracted a new generation of avant-garde aficionados, with its shabby table-work format and the explicit entrances of the actors from the streets into an abandoned theatre.

There’s a fitting tribute to Malle’s work in the way the cast enters the theater in London for this film version (recorded in August 2020), all masked and ready to get the ball rolling. Rae Smith’s set, meanwhile, with its sheet-draped furniture, reflects the sense of decay and neglect that gnaws away at most of the characters throughout the play.

For the uninitiated, try not to think of this as a museum piece with all the appeal of grandma’s cod liver oil. Far from it! The reason actors and audiences alike love this play 120 years on, is its profound humanity, its wickedly ironic sense of humor, and its hymn to enduring life’s challenges no matter what. Plays about endurance against all odds are much needed these days.

Another feature of the play is its timelessness. Rae Smith’s costumes and set place the characters in some vague, early 20thcentury, non-Soviet version of the Russian countryside, with Vanya’s Mother Mariya (Dearbhla Molloy) dressed in slacks and a vintage blouse and tie ensemble right out of Woody Allen’s movie “Annie Hall.” Only the maid, Nana (played here by Anna Calder-Marshall) appears remotely Russian in her full-length, plain cloth dress. Purists might object to a play that is so visually unmoored from its origins, but it might help new audiences appreciate the struggles of the characters all the more.

Toby Jones’s Vanya makes his ‘entrance’ by appearing from out of an old cushy chair, as if he were already part of the furniture. His emergence from a sideboard later on, in search of (what else) another bottle of booze, is a hilarious reminder of just how rooted he is in the run-down farm that has been his (and his niece Sonya’s) life for years.

As Vanya, Jones — familiar to fans of “Sherlock” and, charmingly, the voice of Dobby in the “Harry Potter” series — is as disordered outside as in. His wispy hair never in order, his shirt wrinkled, and his trousers stained, Jones rants his way through life while his future hangs in the balance. I’ve seen actors play this part for sympathy, and it’s refreshing to see that Jones isn’t afraid to push back and remind us that the man has a chip on his shoulder the size of Gibraltar.

As Vanya’s niece Sonya, Aimee Lou Wood’s simplicity anchors the play and gives you its soul. The only member of the family not tainted by selfishness or bitterness, her closing monologue will bring you to tears. Given the long ordeal in which are we are still in the midst, her determination to survive and to find comfort and satisfaction in the day’s work, should inspire us all.

The closest thing to a romantic lead here is the role of Astrov, the village doctor, played here by Richard Armitage. Already a star in his own right (“The Hobbit,” “The Stranger”) some will be delighted by the eye-candy spectacle of his Astrov running shirtless out into the rain, just for the hell of it. His passion for nature and reviving the forests remind us that environmentalism has been a worthy cause for well over a century. Strange that it took a Swedish teenager to bring us back to Astrov’s urgent message about the need to heal the earth.

The lethargy and inertia at the heart of the play lies with Professor Serebrayakov, played here with a high pompous elitism by Roger Allam. His obsession with cranking out one more article or promoting one more theory for his colleague’s consideration will hit close to home for those in academia. But what drives everyone around him berserk is his utter lack of concern for anyone else’s well-being. (When Vanya, in a climactic confrontation, appears with a pistol, you really do wish he had better aim).

What makes Serebrayakov’s narcissism that much more incomprehensible is that his second wife, Yelena, is a beauty, dedicated to her husband, and a woman whom any other man in his right mind would wait on hand and foot. Rosalind Eleazar’s Yelena is, of all the performances here, the most revelatory for me. The character is so often portrayed as a damsel-in-distress, so it’s refreshing to see Eleazar give her some agency. Yelena married the professor when he was a widower (Sonya’s mother is long dead), out of admiration for his work. Her frustrations come from knowing what she’s up against as he is retired from his university position. Her husband’s constant call for a physician, meanwhile, brings her closer to the doctor, Astrov (who, of course, makes house calls). Eleazar plays her scenes with Armitage with a sensitivity and world-weariness that stands apart. The attraction between the two is palpable, but negotiated with intelligence and conscience.

There is much to admire in McPherson’s adaptation here. He handles the more familiar bits of dialogue and one-liners with ease. The only quibble I have is that he insists on making explicit the thoughts which Chekhov wisely left unexpressed in the original script. Chekhov doesn’t do soliloquies, for example, but McPherson insists on giving each of his stars a moment in which to spill their guts to the audience. That might work when the play’s set in a Dublin pub, but it is not the purpose of Chekhov’s art.

What makes Chekhov such an enduring presence in theatres worldwide is his insistence that his characters never say what they’re really thinking. This leaves it up to the actors onstage and the audience to work together, to conspire together, and to understand exactly what is going on from one moment to the next. If the characters express themselves too directly — and in McPherson’s telling, they all inevitably do — then Chekhov’s carefully-crafted dramatic tension is broken. There’s no need for the characters telegraphing their every feeling. You’d think McPherson would understand that.

Soon enough our Friday nights might be spent going out to see an actual live show and it will be a huge reward for our own endurance of the pandemic. But broadcasts like this remind us that there is a world of theatre to be explored, in other places, once the travel to London becomes possible again.

Running Time: Two hour and 30 minutes with no intermission.