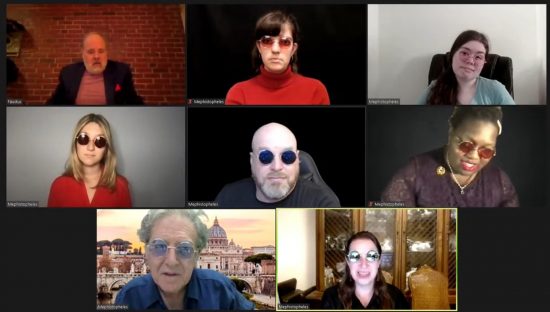 If you think you’ve been in Hell lately, guess again. The Rude Mechanicals have pulled out all the stops, left no Web- or Zoom-based stone unturned to bring you a truly delightful, live version of Christopher Marlowe’s diabolical classic, “Doctor Faustus.” This shape-shifting production features an incredibly versatile roster of actors, most of whom play at least five to six parts, while the genial, greedy Bill Bodie holds forth in the title role of Faustus — i.e., your worst nightmare or The Geek Who Thinks He’s God.

Convinced of his own genius, we follow as Bodie’s Faustus who falls easily for the charms of Mephistopheles and his superior, Satan. The delicious twist here is that Mephistopheles assumes upwards of nine to ten different personas (read: actors) in the course of the play. Which makes for a truly dizzying climax, as Faustus faces his infernal fate confronted by all of them at once on your screen, who taunt and entice him.

…truly delightful, live version…it is really unfair that I can only mention a few highlights here.

Director Claudia Bach has deftly choreographed what seems like hundreds of character changes, accompanied by different Zoom background graphics (among other things) to show off her cast to advantage. There are so many  that it is really unfair that I can only mention a few highlights here.

As Lucifer (especially), Lexi Stein is riveting as a cold-blooded, reptilian blonde whose dispassionate, steady tone and gaze is truly unnerving. Jacqueline Youm takes on the role of Lechery (and other, shall we say, related characters) with relish. You’d be peeling grapes for her in a heartbeat. The widest range of roles belongs to the charismatic Wes Dennis, who one minute chows down as Gluttony, then dons the papal robes, and next, the glasses of a scholar. Nathan Rosen’s Good Angel pleads with Faustus (or nags, it’s hard to tell) to repent but then puts on some bicycle shades as one version of Mephistopheles to tempt him back again.

The list of star turns is endless. Trust me, you’ll have a blast following the quick-changes, aided in many cases by the latest computer tricks and social network technology, all of which serve to remind you just how contemporary Marlowe’s twisted world still is. You’ll find yourself in an all-too-familiar environment of ring tones, notification tones, twisted graphics. Wouldn’t it be wonderful to escape all that and maybe, just maybe, see this crew live onstage soon?

There’s one more live show on Saturday, May 22 so do you really want to sit around and hope for a recording, or do you want to see this hard-working company do their magic in real time? The Rude Mechanicals is one of the few companies I’ve seen who have used this pandemic year to advantage, and found truly liberating ways to mess with your head via your computer screen.

To make a donation in support of The Rude Mechanical’s amazing work, please click here.