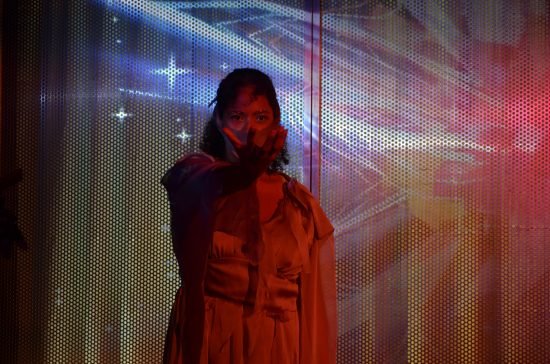 For over a year and a half, the world has anxiously anticipated a vaccine to combat the current global pandemic. While some countries have now been able to successfully launch vaccination sides, many more are still waiting for supplies and technology, let alone vaccines. It’s a time period that has forced many to go deeper inward, exploring the world within oneself in order to just make it through this reality. Everything is constantly changing, and also seems to feel like it’s staying the same. We’re so close, yet so far.

…a beautiful exploration of science and psyche, past and present, victim and perpetrator, as well as pain and forgiveness.

Derek Lee McPhatter’s “Serious Adverse Effects” dissects similar paradoxes and dualities, only in the future. It’s some years after a mysterious disease, known as the Syndrome, has taken hold of the population. Dr. Vye (Valerie Lewis) seems to be on the brink of a breakthrough, hopeful and excited to prove herself right, and her former boss, Dr. Melvin Stallings, wrong. “The science is right here. I’m so close,” she says. But getting to the “a-ha” moment will require more than proving her hypothesis with the right data.

Dr. Vye needs to forgive herself for working with Stallings in the first place and for trusting him even though her gut told her otherwise. She needs to forgive herself for allowing the unethical history of testing African-American women “for science” to repeat itself. Is she responsible for the death of a patient years ago, or is she keeping herself in so much pain for staying in the past?

As its first in-person production of 2021, Rapid Lemon Productions (at its new home, Motor House) ensured that the world premiere of “Serious Adverse Effects” would be safe for both actors and theatre goers, requiring face masks and conducting temperature checks at the door. For those unable to attend in person, there is an option to view the live stream of the performance.

The audience follows Dr. Vye as she tries to convince her patient, Paula (Kyla Hammond), that there’s a way to calm the syndrome symptoms. Dr. Vye has the Syndrome too, we find out. Paula, however, refuses to believe a word Dr. Vye says, the pain of losing her sister too fresh and raw in her mind. To prove her reality and regain Paula’s trust, Dr. Vye conducts a test on herself. She hopes that by showing Paula what her recent discoveries are capable of providing, she can also confess she’s found a way to reach Paula’s dead sister, Nia (Maria Marsalis).

While it may seem like all is on the up and up, the doctor-patient relationship shifts again when Paula’s fiance, Brandon (Max Johnson), enters the scene. He’s rude, angry, and focused on reminding Paula about the past. There’s this beautiful tug-of-war between Paula’s memory of what happened to herself and her sister, Nia, and Dr. Vye’s promise of what she can do to bring the sisters back together in a place that seems and feels impossible. What future would you choose if you had the chance to be with your thought-to-be-dead sister?

From the livestream perspective, the set (Bruce Kapplin) and lighting (Allan Sean Weeks) design helped to bring Dr. Vye’s laboratory to life. With each experiment, the seemingly white laboratory would light up and cycle through bright primary and secondary colors. The bleeps and calm, neutral voice representing the computer made it very easy to follow what was happening, whether Dr. Vye was recording herself, accessing data, or setting up experiments. While it was a little hard to see virtually, there was a screen behind the chamber that displayed video clips at various points, reflecting the person’s memory or subconscious. Though some of the production details, like costume and props, would be more vivid in person, the virtual viewer can easily gather everything they needed to follow the storyline. Putting on a live show for both an in-person and virtual audience is a tremendous feat in and of itself.

Directed by Noah Silas, “Serious Adverse Effects” is a beautiful exploration of science and psyche, past and present, victim and perpetrator, as well as pain and forgiveness. It does a brilliant job at asking the audience what structures or limits they uphold or maintain because they think that’s all that can exist. Why limit oneself?