Theatre Review: The Strand Theater Company’s Production of ‘The Most Massive Woman Wins,’ streaming on Broadway On Demand 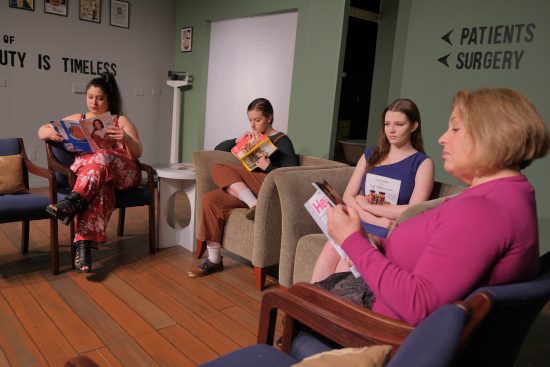 Written by Madeleine George and directed by Nicole Mullins, the Strand Theater Company’s production of “The Most Massive Woman Wins” is a powerful meditation on women’s deep hunger for respect in a world that frequently denies their full humanity.

The cast of four talented actors brings the piece to life with an intensity and emotional range…This is truly a production not to be missed.

Set in the waiting room of a liposuction clinic, four women sit anxiously before surgery, attempting to distract themselves until the fear bubbles to the surface and they take turns sharing their stories — all brimming with decades of deep hurt and humiliation that convinced them a doctor’s scalpel would take away their pain.

However, beneath the desire to meet society’s punishing beauty standards lurks a deeper grief. The ensemble cast of Penni Barnett (Sabine), Molly Boyle (Rennie), Kaitlyn Fowler (Cel), and Jess Rivera (Carly) take turns describing the callous cruelty of boyfriends and husbands — far from ideal specimens themselves — who assume the right to gaslight and bully them into submission. They recount difficult childhoods, a demanding mother, a violent father, a teenage pregnancy, and the ever-present struggle with food and body image.

The women’s stories are painful, but hope endures in the transformation that takes place in that waiting room. Having displayed their wounds to each other, they find the strength to cast off societal demands and boldly claim the space that is rightfully theirs.

The cast of four talented actors brings the piece to life with an intensity and emotional range that reflect the weighty subject matter and Strand Theater’s mission to “support and amplify womxn’s voices on stage and off.”

Maggie Flanagan’s (costume design) costumes set the right tone, initially dressing the woman in outfits that reflected their personalities, before they all appeared wearing matching hospital gowns.  In keeping with the simple costumes, Amy Rhodes (set/lighting design) created a sparse set with four chairs and magazine-covered end tables. A large sign on one wall extolled the quest for beauty, a reminder of the weight these women carried with them. Of course, Glen Ricci (video production/editing/photography) played a crucial role in bringing the polished production to our screens.

“The Most Massive Woman Wins” premiered in the 1990s, a world different from the one we inhabit now, and yet, very much the same. Although it’s a difficult topic, there are moments of humor, light, and healing as well as the opportunity to celebrate women’s strength and resilience. This is truly a production not to be missed.

Advisory: This production depicts instances of sexual assault, body dysmorphia, fat-shaming, self-harm, gas lighting, mental abuse, and eating disorders. Viewers under 17 should be accompanied by a parent or guardian.

“The Most Massive Woman Wins,” presented by the Strand Theater Company, is streaming live online Friday-Sunday, through May 16.  For more information or to buy tickets, click here.