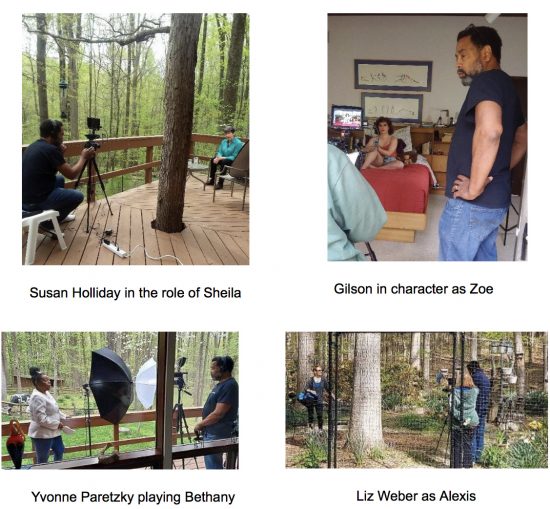 On set with “To The New Girl,” filmed by Marvin Bowser. Courtesy of PMTC.

Peace Mountain Theatre is presenting “To the New Girl: Sound Advice for My Husband’s Wife or Mistress,” written by Samantha Macher and streaming on YouTube. The play is produced by Hal Freed and directed by Laurie T. Freed, the company’s artistic director. This is the theater’s first foray into filming a production with the help of camera man, Marvin Bowser. The play is a series of monologues by a group of talented actors. Emily Gilson, Susan Holliday, Yvonne Paretzky, and Liz Weber each play dual roles.

Each story is unique. It opens with Zoe (Gilson) a twenty-something whose boyfriend and she have been enjoying kinky sex. Zoe finds out about the woman in her boyfriend’s life and pretends to be him, texting the new girl. She discovers the new girl is also willing to participate in this strange sex life. Humorously, Zoe ponders what kind of town they all live where two women are willing to capitulate to this man’s weird requests. How bad, she wonders, are the other available men? Later, Gilson morphs into Melanie, an abused wife whose last humiliation from her sadistic husband is a new girlfriend whom he flaunts openly. As Melanie speaks to Tiffany (the new woman), she tells her a terrible tale of abuse and then later threatens her as a clear warning of what is to come with this cruel man. Gilson does a good job of recreating the horror of this relationship as well as slowly revealing the hidden message of the threat.

Liz Weber brings us Miriam, an older Jewish grandmother whose husband breaks the news of his decision to leave her for a younger, Catholic woman, Kathleen. Weber takes us from the shock and anger Harriet feels to a place of acceptance and strength as Miriam tells Kathleen that the news is revealed at the family Seder at Passover. In a 180 degree turn, Weber slips into the character of Alexis. She is a woman of wealth whose husband has had a series of peccadillos, currently the children’s new nanny. Alexis is cruel and manipulative who is not only willing to put up with her husband’s escapades, she also enables his philandering. When the nanny comes to her for help, Alexis first puts her in her place as a servant and an immigrant, and then tries to deal with the new situation in a demeaning manner.

‘To the New Girl’ gives us a sometimes humorous, sometimes warm, and sometimes terrifying look into the dissolution of relationships in modern society…Holliday’s monologue stands out as a wonderful blend of fine acting and excellent directing.

Bethany is a good Christian woman married to a popular television preacher. She finds out her husband’s loss of interest is not another woman but a man. Yvonne Paretzky depicts wonderfully those women give up their own self-worth and happiness to cling to wealth, respectability, and fame. She also belittles her competitor, Trevor, as she lays out terms for continuing the ruse of marital bliss while allowing his relationship with her husband to continue.  As Karen, Paretzky is a teacher. The 18-year-old student who had been walking the dog for her is now having an affair with her husband, right in her home. She tells the naïve girl that if she wants to keep her new lover happy, she had better learn to cook. In a hilarious scene that shows humor and bitterness, Karen teaches her student how to make pork chops and Fettucine Alfredo. Paretzky’s comedy timing was the highlight of the evening for me.

Holliday adroitly plays the two more somber and bittersweet roles. First, she gives us Sheila who cannot conceive and it consumes her. Physical issues have left her unable to have children. She spends her days praying and then going into a depression because she has not fulfilled her role as a woman and a wife. At first her husband was sympathetic but eventually turned to a less self-pitying relationship that resulted in a pregnancy. Holliday first expresses self-hate and then, finally, a glimmer of self-worth and introspection. The last piece, also played by Holliday, is the most touching of the monologues. Harriet married Harold, the love of her life, 57 years ago after World War II and the two remained very much in love throughout the marriage. Now her husband has dementia and is in a nursing home. At first he still remembers her but now that memory has faded. In his need for female companionship, he befriends another confused resident, June. Holliday grasps the anger and pain Harriet feels losing her husband to this disease. Her bittersweet acceptance of this relationship that tears away the last remnant of her longtime friend and lover is a compassionate ending to the performances.

Freed’s direction has a light touch as these are really exceptional actors. I enjoyed the change to outdoor surroundings on a few of the pieces. Holliday’s monologue stands out as a wonderful blend of fine acting and excellent directing. Try to catch this illuminating series of monologues. “To the New Girl” gives us a sometimes humorous, sometimes warm, and sometimes terrifying look into the dissolution of relationships in modern society.

“To the New Girl” runs from May 21-May 23, 2021 with a Saturday showing at 8 pm and a Sunday performance at 2 pm. Presented by Peace Mountain Theatre Company, the performances are free but you will need to register to view the production here.