Audio Review: ‘The System of Doctor Goudron and Professor Plume’ presented by the National Edgar Allan Poe Theatre on the Air on WYPR 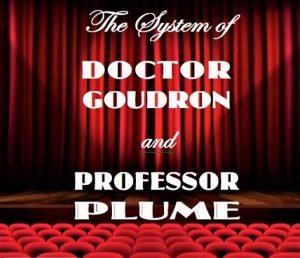 “The System of Doctor Goudron and Professor Plume” is the latest installment of the National Edgar Allan Poe Theatre on the Air. While modeled on Edgar Allan Poe’s “The System of Doctor Tarr and Professor Fether,” this production takes Poe’s story in a new and interesting direction by incorporating elements from the French Grand Guignol style of naturalistic horror into the production.

In the episode, reporter Zach Jaeger from Le Journal, usually assigned to the crime beat, arrives at Dr. Maillard’s asylum to write about the doctor’s innovative treatment methods. In most prior episodes, Maillard has acted as the institution’s director, serving as the “Inner Sanctum”-style host for the series. This time the journalist finds the normally sedate asylum in a state of pandemonium and suspects that Maillard’s treatments are in fact a “system of lunacy.” We regret that we cannot provide much more detail about this fine episode, as it would involve plot spoilers.

We can say, however, that this episode admirably pulls together many of the prior episodes of “Poe Theatre on the Air,” while also serving as a transition to take the series in a radically new direction. Alex Zavistovich plays Dr. Maillard, and as usual is in fine form. A number of other characters reappear from earlier episodes, including “The Tell-tale Heart,” “The Black Cat,” “The Facts in the Case of M. Valdemar,” and — for us most notably — Miss Tripetta from “Hop Frog.” Tripetta’s eccentricity is again enacted beautifully by Jen Bevarelli.

“The System of Doctor Goudron and Professor Plume” is also noteworthy for its excellent use of music and sound design. Earlier episodes, namely “Never Bet the Devil Your Head, Part 2” and “The Premature Burial,” won Gold Selection honors at the 2021 Hear Now Festival. “The System of Doctor Goudron and Professor Plume” dénouement of the Dr. Maillard season continues in the somewhat non-linear, off-kilter tradition of these two episodes, using circus music to mark the entrance of the inmates and the sound-of-line dancing to underscore the manic activity building within the asylum’s walls.

Series producer Alex Zavistovich explains that this last episode with Dr. Maillard serves to close out the season and transition to the next by making reporter Zach Jaeger, introduced earlier at the end of “The Fall of the House of Usher, Part 2,” the character through whom we experience events. Mr. Zavistovich states: “Zach Jaeger allows the listener to have a more reliable partner in the proceedings of ‘The System of Dr. Goudron and Professor Plume.’ At the conclusion of the current story, we find that the reporter is the flat-mate of Poe’s detective, Auguste Dupin. That sets the stage for a handoff from the end of Goudron and Plume to the stories of the next season.” (We note here in passing that Mr. Zavistovich himself takes on the new role of Jaeger and that he has very convincingly fashioned a novel, steadied character — very different from the erratic Dr. Mailord.)

The next season is to be a serialization of Poe’s three Dupin mysteries: “The Murders in the Rue Morgue,” “The Mystery of Marie Roget,” and “The Purloined Letter.” Rather than the anthology approach used in the past season, the coming season will serialize each story across four or five episodes, featuring a cliffhanger at the end of each episode. This will also allow events to glide from the end of one story to the beginning of the next. At the same time, a narrative arc develops in the relationship between Dupin and Jaeger across the episodes. (In the original Dupin stories, the narrator went unnamed.)

Mr. Zavistovich explains these modifications to the original Poe stories as a necessary and desirable part of the process of translating the stories from the printed page into audio dramas: “The detective work in the originals was largely armchair quarterbacking based on newspaper accounts,” Mr. Zavistovich tells us. “That makes for rather boring audio drama! We’ve had to take some liberties in the way clues are discovered, as well as in the relationships among the two main characters and the police prefect (also unnamed in the original stories).”

As in the first season with its dramatization “Edgar Allan,” there will be some special shows throughout the year which deviate from the episodic series and serve as standalone pieces. One already is on offer in the fine performance of renowned British actress, Helen Atkinson Wood, with her immaculate and yet passionate reading of Poe’s poem “The Bells.” This episode, shorter than usual, also includes a haunting performance by Baltimore’s Charm City Bronze Handbell Ensemble of composer Erik Satie’s famous “Gymnopédie No. 1.” Actress Wood will also be on hand in the future for further readings of shorter Poe works such as “Shadow: A Parable” and the poem “Silence.”  Each of these will be presented as its own special episode.

Thus far, Mr. Zavistovich has presented an intriguing series of horror thrillers in the vein of such classic radio and television series as “Inner Sanctum” and “Night Gallery,” complete with the very successful creation of a macabre narrator. The producer of Poe Theatre on the Air is to be congratulated for not being one to rest on his laurels, for he is fully prepared to take innovative risks and bring his series into new and unexpected creative directions.

“The System of Doctor Goudiron and Professor Plume” runs 26:47 minutes and “The Bells” runs 12:20 minutes.  Both can be listened to here.