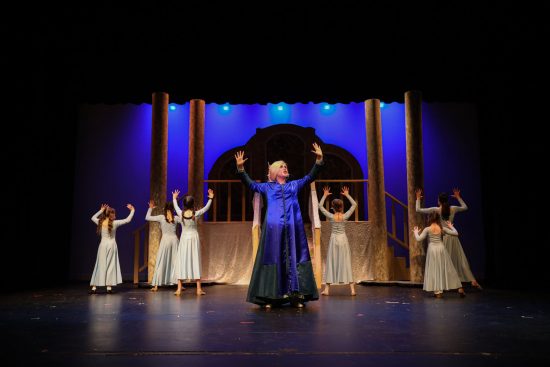 In January 2020, over 100 young people from ages 7 to 14 stood in line to register to audition for the Children’s Theatre of Annapolis’ long-awaited production of “Frozen Jr.”

Two days later, after a weekend of acting, singing, and dancing, a cast was selected and music rehearsals began for the show scheduled to open in April. And then, just like that, the theater went black

The entire country was shut down, and theaters including the Great White Way were closed indefinitely.

There were days when CTA considered shutting down entirely, but, Jason Kimmel, Education Director for the organization, used his unique creativity to carve out a fall full of Zoom-based workshops that allowed performers to acquire new skills and interact with each other in a safe and fun environment.

In January, as talks of the vaccine rollout began, the CTA Board began brainstorming how they could actually adhere to all safety guidelines but still put on the Frozen show. Michelle Bruno, Vice President of CTA, served as the Director, with Jason Kimmel as choreographer, and I returned in the role of Music Director.

But would the same cast be available and willing to try to bring back the production? Though a handful either moved away or were already committed to something else, most of the cast was excited to return. It was frustrating in the first musical rehearsals via Zoom not being able to hear the students actually singing. However, it was great for the kids to see each other, how much they had grown, and how much they had missed each other.

What a difference a year made. All students had grown, some almost doubling in physical size. And voices had changed, gaining more maturity and in the cases of most boys, octaves were added. Friendships resumed. Costumes were created. Sets were designed. Tech crews practiced. Clear plastic masks were purchased. There was a palpable excitement that, yes, we could really do this.

Then a Covid test scare closed the rehearsals for 10 days. Would we be able to make up for that time? Never underestimate the power of the talents and resolve of young people. CTA’s Frozen Jr. opened to a sold-out show on June 4, 2021. Highlights include the amazing talent of Mia Rinehart singing every bit of Idena Menzel’s ridiculous vocals as Elsa in Let it Go; Mackenzie Currie’s loveable Anna (the spare, not the heir) masterfully played in almost every scene; and Alana Hallums, who as Little Anna steals the hearts of every audience member with her precocious and, yes, naughty escapades.

For the “First Time in Forever” CTA was back, showcasing the talents of local youth while thrilling younger audiences who sat memorized through the entire show — and inspiring them to dream of being on the stage.

Running time: 1 hour with no intermission.