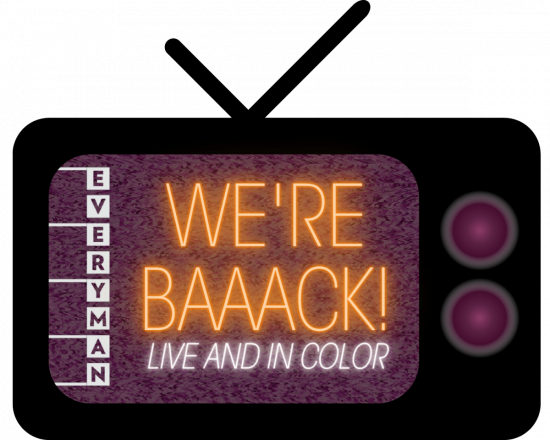 Lineup Includes a Family Hit of Stage and Screen, an Award-Winning Broadway Play, an Updated Classic from the America Canon, and World Premiere by a Red-Hot Baltimore Playwright

Baltimore – Founder and Artistic Director Vincent M. Lancisi and Managing Director Marissa LaRose today announce the new, 2021/22 season at Everyman Theatre. The six-play season marks the organization’s return to live theatre after 18 months, with a varied roster, including a family favorite from the stage and screen, a reimagined hit of a universally-treasured novel, a classic gem from the American canon, and a World Premiere work by a red-hot Baltimore-based playwright and author. The season features stories from a wide range of authors and perspectives that mark the return to a distinctive in-person experience for Everyman patrons, while offering more access through both live and digital opportunities.

Everyman Theatre welcomes patrons back to West Baltimore with performances of Robert Harling’s beloved STEEL MAGNOLIAS set in a beauty salon in northern Louisiana. It runs at Everyman from August 11 to September 5 and also begins streaming into homes on August 23. FLYIN’ WEST by poet, playwright, and activist Pearl Cleage runs from October 5 to October 31. Next up is a staple of the American Theatre, THE SKIN OF OUR TEETH by Thornton Wilder, which is slated for December 7 to January 2. From February 1 to February 27 is Jacqueline E. Lawton’s passionate and daring play BEHOLD, A NEGRESS. The beloved Jane Austen book SENSE AND SENSIBILITY is irreverently and playfully adapted for stage by Kate Hamill, and runs from April 5 to May 1. Everyman’s 31stseason closes with a World Premiere comedy by playwright, author, internet sensation, and Baltimore native R. Eric Thomas called CRYING ON TELEVISION. It runs from May 31 to June 26. According to Lancisi, “These six plays feel like the perfect antidote and response to the past year. They were chosen for theatre lovers to welcome us all back to celebrate great plays live and in person again. There are comedies both classic and new, dramas from different ages, and the voices are diverse in many respects. A theme emerged among the plays, of looking at history through a fresh lens. We can’t wait to see you audiences in our lobbies and in their seats, as the curtain rises on a new story to experience together once again.”

The details-to-date on Everyman Theatre’s 31stanniversary season are as follows:

Steel Magnolias – August 11 to September 5
by Robert Harling
directed by Casey Stangl
In a beauty parlor in northern Louisiana, life is anything but boring. Over the course of three years, six inimitable women share their lives with wit, warmth, humor, and intelligence, through the highest highs and the lowest lows. A perennial fan favorite of stage and film,Steel Magnolias celebrates the everyday power of female friendship.

Flyin’ West – October 5 to October 31
by Pearl Cleage
directed by Paige Hernandez
Reflecting themes of racism, feminism, pride, and freedom,Pearl Cleage (playwright, novelist, political activist, andfirst poet laureate of Atlanta), tells the storyof four determined African-American women whose lives are forever changed when the West opens up for discovery by people willing to settle in this harsh and unknown region.

The Skin of Our Teeth – December 7 to January 2
by Thornton Wilder
directed by Noah Himmelstein
This Pulitzer Prize winner combines farce, burlesque, and satire, depicting the Antrobus family of Excelsior, New Jersey who narrowly escape one cataclysmic disaster after another. Whether he’s inventing the alphabet or saving the world from apocalypse, George Antrobus and his formidable family somehow manage to survive, but only by the skin of their teeth!

Behold, A Negress – February 1 to February 27
by Jacqueline E. Lawton
Set in Paris at the beginning of Napoleon’s reign, Lawton’s play imagines an intimate relationship between a real-life painter and her muse, a formerly enslaved black woman. A passionate and daring examination of the challenges of intersectional feminism and the role of art during times of social unrest and political upheaval.

Sense and Sensibility – April 5 to May 1
adapted by Kate Hamill
based on the novel by Jane AustenBoth hilarious and heartbreaking, this fun, fast, and playful adaptation of Austen’s beloved classic follows the fortunes (and misfortunes) of the Dashwood sisters –sensible Elinor and hypersensitive Marianne– after their father’s sudden death leaves them penniless and socially vulnerable.When reputation is everything, how do you follow your heart?

Crying On Television – May 31 to June 26
by R. Eric Thomas
directed by Reginald L. Douglas
This World Premiere comedy from Thomas, a Baltimore-based writer, humorist, and internet sensation, is both laugh-out-loud funny and beguilingly sweet. It’s a platonic rom-com about four strangers in an apartment building, the notion of loving TV characters as much as your real friends, and trying to form genuine friendship connections as adults.

Everyman Theatre received a $25,000 grant from the National Endowment for the Arts to support the ongoing development of Thomas’s play, Crying on Television, including staged readings and workshops throughout the year, culminating with the World Premiere mainstage production as part of the 31stseason.

LaRose speaks for the entire organization when she says, “We’ve been dreaming of our return to live theatre for 15 months, and the pride we feel in getting here is greater than we could have imagined. After spending a year like no other, pivoting both our season and our education programs to a virtual platform, we are so very ready to welcome the community back in person. This past year has taken us on a long and bumpy road and I am grateful for the tenacity and dedication of our staff and Board in navigating the challenges. This year has challenged us in many ways, and has made a stronger Everyman — we are ready to throw open the doors!”

In-person, single tickets for Steel Magnolias only go on sale Monday, July 12. Streaming access is available now at $30 per household, allowing for unlimited number of viewers at home. Subscriptions, which start at only $123 for the new, 2021/22 season at Everyman Theatre are available now by visiting everymantheatre.org or calling 410.752.2208. Box office hours have been extended to Monday – Friday from 9 am until 6 pm, and Saturdays from 10 am until 5 pm.

Everyman Theatre’s department of Education and Community Engagement also offers seasonal classes and other opportunities for people of all ages — 3 to 93 — to discover their inner creativity. Through dynamic classes the imagination is excited, artistic expression is elicited, and theatrical skills are deepened. Live events, innovative in-person and digital content, and programs that ensure space for the whole family are all part of the offerings, all season long. This summer, celebrate through dynamic virtual drama classes for students from preschool through high school.

Also slated for the new season, Everyman’s education department offers invites schools to take part in our Virtual Field Trip program. Students will discover new and engaging digital experiences while also enriching their curriculum with new artistic entry points and artistic opportunities. Teachers are encouraged to work with the Everyman staff to curate their own Virtual Field Trips as well.

Everyman Theatre is supported in part by grants from The Maryland State Arts Council (msac.org), The Citizens of Baltimore County, Mayor Brandon M. Scott and the Baltimore Office of Promotion and the Arts.

The current, 2020/21 reimagined season at Everyman Theatre is sponsored by P. Flanigan & Sons, and University of Maryland, Baltimore. All digital programming is supported by grants from the Sheridan Foundation, France-Merrick Foundation, and Galanthus Foundation.

Additional sponsors for the 2021/22 season include Brenda K. Ashworth and Donald F. Welch for Sense and Sensibility and the National Endowment for the Arts for Crying on Television.

Everyman Theatre is a professional Equity theatre company celebrating the actor, with a Resident Company of Artists from the Baltimore/DC area. Founded in 1990 by Vincent M. Lancisi, the theatre is dedicated to engaging the audience through a shared experience between actor and audience seeking connection and emotional truth in performance. Everyman is committed to presenting high-quality plays that are affordable and accessible to everyone. The theatre strives to engage, inspire and transform artists, audiences, and communities through theatre of the highest artistic standards and is committed to embodying the promise of its name, Everyman Theatre. Everyman Theatre is a proud member of the Bromo Tower Arts and Entertainment District, the Market Center Merchants Association and the Greater Baltimore Cultural Alliance. Lancisi partners with Managing Director, Marissa LaRose in leading the organization.

Everyman Theatre stands in solidarity with Black, Indigenous, and People of Color, and AAPI communities and is committed to an equitable, diverse, and inclusive atmosphere at every level of our organization. To learn more, visit our website here.