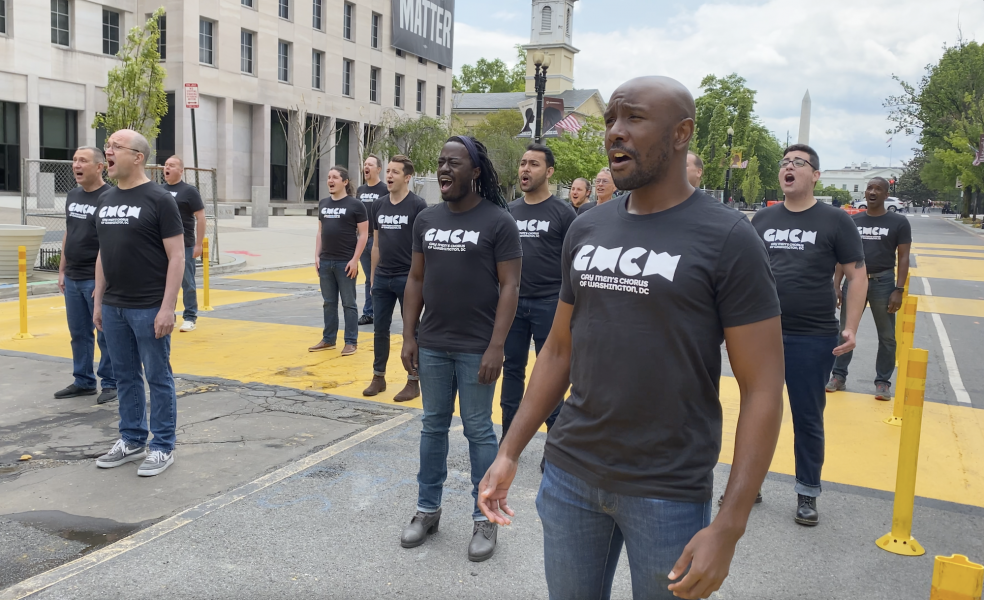 The Gay Men’s Chorus of Washington, DC is celebrating 40 years of singing for justice and equality in our nation’s capital and abroad with a new streaming celebration, “GMCW Turns 40.” It is available for viewing with an online ticket purchase now through June 20, 2021.

The digital retrospective is an amalgamation of clips from past performances, a timeline of major events in the life of the chorus, and reflections from individuals ranging from the chorus’s founding director, Marsha Pearson, to the production crew and the choir members. It also includes some full length versions of songs from past shows, and a few new, virtually recorded selections to round out the program.

There were some notable highlights. “Ragtime” composers, Lynn Ahrens and Stephen Flaherty, wrote a song entitled “Harmony’s Never Too Late” specifically in honor of GMCW’s 40th anniversary — wow! What an honor to have such a talented duo create a brand new and meaningful work for our very own GMCW. The song “Make Them Hear You” from “Ragtime” has been GMCW’s personal theme song for years, so what a beautiful tribute to be gifted with a new anthem specifically addressing the challenges and hopes of the LGBTQ+ community.

We were also treated to an absolutely ethereal performance of “Sure On This Shining Night” performed by one of GMCW’s small ensembles, Rock Creek Singers. Portions of the performance were recorded outdoors with social distancing protocols at (if I’m not mistaken) the US Arboretum, and the backdrop was a lovely partner to the haunting melody and tender sincerity of the group.

I also have to mention that ASL interpreter, Jamie Sycamore, has become the secret scene-stealer of the chorus and I am HERE FOR IT. On “Sure On This Shining Night,” you won’t be able to take your eyes off him. He gives a truly inspired and emotional flair that enhances the chorus’s musical performances on every song. Soloist Jordan Peyer also shone in a 2019 rendition of Andra Day’s “Rise Up,” belting out passionately powerful runs and ending on a vibrant falsetto while ably backed by the chorus.

The GenOUT Youth Chorus (for LGBTQ+ teens and allies) gave an effortless performance of “Will You Teach Me?” Their head tone and perfectly matched vowels would be impressive in a much more mature choir. For a teen choir, it is a true testament to the dedication of these students and the skill of their director, C. Paul Heins, who instructs these growing musicians in proper musical technique and draws out their very best. Oboist Matthew Brady lent a soulful accompaniment to the piece which added to its charm.

While I appreciated every moment of these highs, the educator in me was longing for a more cohesive program overall. The previously recorded interview Marsha Pearson was wonderful as she spoke of her calling to social justice but I was also so curious about the origins of the chorus. Why it was formed, who were the first members, and what were the special challenges the choir might have faced in the early days?

I feel it would have added even more to the event if it had been structured with a sequential, verbal narration that delved deeper into the whys and hows of the history of the chorus, with the clips, songs, and monologues interspersed in chronological order in a way that tied into the story of the choir from its beginnings to the present day.

The choices for full-length songs from past performances were very strong but it wasn’t clear why these particular songs were chosen as representative of the choir’s 40-year history. I am sure there was a reason but the program didn’t communicate it. Whether they were the director’s personal favorites, a vote from the chorus, or especially meaningful personal moments to the choir as a whole, I wanted to know what those reasons were so I could enjoy and appreciate them even more, along with the chorus.

I had a mixed reaction to “GMCW Turns 40” as the format felt disjointed at times. That said, I couldn’t help but feel my spirits lift at the closing number, “From Now On” from “The Greatest Showman.” What a message of hope for the receding pandemic, and what a promise from the chorus that “we will come back home again.” I know you will, GMCW, and we can’t wait!